More for you |
The UK's cheapest new cars revealedDacia Logan MCV from less than 7000New issue of What Car? magazine on sale nowPromoted | 5 reasons why it makes sense to go electric todayBig savings on our Car of the Year Awards winners
Home
News
Dacia Logan MCV revealed
news 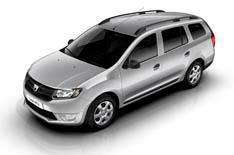 This is the Dacia Logan MCV that has just been revealed at the 2013 Geneva motor show.

It's a bargain estate that will offer Volvo V70-rivalling space from 7000 when it goes on sale in the UK in the summer.

Despite its name, the Logan MCV is, in effect, an estate version of the Sandero hatchback that went on sale in the UK earlier this year. Its boot capacity is 573 litres with the rear seats up; they also fold (with a 60/40 split) to expand that load space to 1518 litres. That means the Logan has a larger boot than the Ford Focus Estate, and its figures are only a little behind those of the Volvo V70.

As with the Sandero, the Logan MCV will be offered with a choice of petrol engines - a 1.2 four-cylinder with 74bhp and a 0.9-litre turbocharged three-cylinder motor with 89bhp. There will also be a 1.5-litre diesel option, with 89bhp, that will deliver just 99g/km of CO2 emissions.

The standard equipment levels are likely to be in line with the Sandero's, although the entry-level 'Access' version of the Logan will get body-coloured bumpers. The mid-spec is likely to be badged 'Ambiance', while the range-topping 'Laureate' model will bring cruise control, air-conditioning and electric windows all round. The Dacia version of Renault's R-Link touch-screen infotainment system will also be available.

The Logan MCV is on sale in the summer. It should carry a price premium over the equivalent Sandero of around 1000, so we'd expect a price range of between 7000 and 11,000.