More for you |
The biggest British driving mythsThe safest cars on sale todayPromoted | Is an electric car right for me?What’s the best practical convertible car for me? Best used small SUVs for less than £15,000
Home
News
Daihatsu Cuore
news 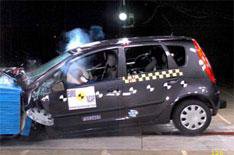 Front impact
The passenger cell did not deform during the test, but several other areas that caused concern were highlighted. The airbag inflated very quickly, which might pose a risk of injury to occupants faces and eyes. The glove compartment and steering assembly were also seen to pose risk to occupants legs.

Child protection
The Cuore had good safety features in this respect, with ISOFIX mountings present and an ability to switch off the passenger's side airbag to allow the use of a rearward-facing child seat. Information on why the airbag needs to be turned off when using a seat of this nature was clear and permanently attached.

Information on whether the airbag was on or off was insufficient. Advice on the presence of ISOFIX mountings on the rear seats was clear.

Pedestrian protection
The bonnet design was deemed to feature inadequate built-in protection for a pedestrians legs and head in the event of a collision. Protection for a childs head impacting the bonnet top was noted to be particularly poor.