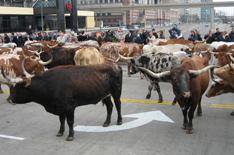 You can't fault the company for ambition.

The plan to launch the rugged new Dodge Ram outside, surrounded by cowboys herding cattle up the main street outside the show halls, certainly grabbed the attention.

As the Ram emerged and took its place centre stage, Chrysler's co-president Jim Press proudly announced: 'This is one show you're not going to forget.'

He was right but it was for all the wrong reasons.

As he began talking his way around the Ram's facets, the crowd's attention was diverted across to the pen where the cattle and cowboys looked on.

Maybe it was the cold, maybe it was just nature playing its part, but some of the cattle had clearly got a little confused and started humping away.

Laughter turned to cheers and the whole presentation ground to a halt.

'Will you please look at the car?' pleaded Press.

Rule number one: the side show should never usurp the star.