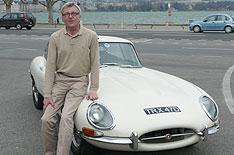 What Car? decamped to Geneva for the motor show this week, although associate editor Roger Stansfield probably had the best journey to Switzerland

It'll never sell. A Jaguar with no wood on the interior, no sat-nav or Bluetooth or iPod connector, and no airbags or anti-lock brakes or stability control.

You have to climb over a high, broad sill to get in, and your chest is perilously close to the cente of the wooden-rimmed steering wheel once you're there.

We're talking about the legendary (and on this occasion the word is not a cliche) E-type, which is celebrating its 50th birthday this year.

On the eve of the Geneva motor show, Jaguar assembled more than 20 of them fixed-head coupes and drop-head convertibles; Series 1, Series 2 and Series 3 versions; six-cylinder and V12 variants; white ones, red ones, silver ones and more than a few in British Racing Green and let us loose on part of the original press launch route.

This might not exactly have been heaven, but it was cetainly the waiting room to go in.

Series 1 owners will tell you these are the only E-types worth having, and we tried an ivory white coupe from 1966 powered by a 4.2-litre in-line six-cylinder engine. Very nice, too.

However, not as nice as the burgundy 5.3-litre V12 Series 3 from Jaguar's Heritage Collection we stepped into for our second run. Talk about torque... once you've got the car rolling away from the kerb you can stick the gearlever in top (fourth) and the car will pull from as low as 400rpm, if you want, which means there's no need to get busy with a occasonally obstructive gearsift.

With any old car you have to drive it rather than let it drive you, which is what seems to be the case with so many modern offerings. There's great satisfaction to be had from that. A pity the roads, traffic and other drivers aren't the same as they were 50 years ago. Just imagine what an E-type must have felt like in those conditions.