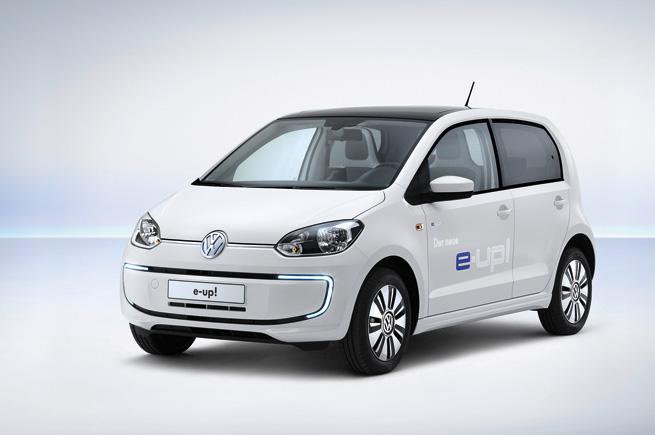 The all-electric Volkswagen e-Up will go on sale later this year.

Volkswagen says its four-seat electric city car has a range of 93 miles and can get from 0-62mph in less than 14.0 seconds 0.4 seconds quicker than its entry-level petrol-powered counterpart.

The 81bhp electric motor can power the e-Up to a top speed of 84mph.

Charging is through a standard domestic socket or a quick-charge system. VW says that an 80% charge takes 30 minutes.

The e-Up's styling changes are minimal, with its front and rear bumpers redesigned for aerodynamic reasons, while the VW emblems all have blue backgrounds. It also gets 15-inch alloys and leather interior details.

The e-Up will make its debut at the Frankfurt motor show in September and order books open towards the end of this year.

Prices haven't been confirmed, but expect it to cost from around 21,000 (16,000 after the Government's 5000 low-carbon vehicle grant). This will be competitive with the all-electric Renault Zoe, which costs from 18,650 (13,650 after the Government grant). However, Zoe buyers will need to lease the car's battery pack, while it is included with the e-Up.

The first cars will be delivered in early 2014.

Volkswagen will also launch its e-Golf within six months of the e-Up, while the ultra-efficient Volkswagen Golf Bluemotion Twindrive plug-in hybrid will go on sale in 2014.

Read the full Volkswagen Up review >>