More for you |
Most efficient hybrid cars you can buyJaguar E-Pace vs Jaguar F-Pace: which is best?It it right for dealer to keep a used car's registration document for months? Will my car be able to run on the new E10 petrol? UK’s first electric car charging forecourt to open
Home
News
Euro NCAP reveals latest safety ratings
news 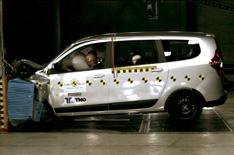 Euro NCAP has released its latest set of crash-test results, with 14 of the 15 cars tested receiving its maximum five-star rating.

The Range Rover and Volvo V60 Plug-In Hybrid both performed well. The Volvo was particularly impressive; it gained a similar score to its conventionally powered sibling, despite the hybrid powertrain adding almost 350kg.

Despite its five-star rating, Land Rover has said it will soon introduce improved whiplash protection to the Range Rover an area that is currently rated as marginal which should improve its overall score of 91% for adult occupants.

The all-new Volkswagen Golf scores well with the introduction of several advanced driver assistance technologies. It is available with a Multi Collision Brake system, which stops the car after an accident to help avoid further collisions, Front Assist, a system that helps prevent collisions with the vehicle in front, and Proactive Occupant Protection, which detects an emergency manoeuvre is being made and prepares the vehicle and its occupant restraint systems for a possible impact.

These safety systems are all newly awarded by Euro NCAP Advanced a reward system for advanced safety technologies. However, the Golf's 71% safety assist score is restricted by the lack of a standard-fit rear seatbelt reminder.

The all-new Golf scored well in the safety assist category

Other cars benefiting from advanced driver technologies are the Mercedes-Benz A-Class and the Ford Fiesta.

Standard safety technology for the A-Class includes Collision Prevention Assist, which helps prevent rear-end collisions, and Attention Assist to warn of driver fatigue, while Pre Safe a system that prepares for an imminent collision by taking measures such as tightening the seatbelts is available as an option. This helps push the A-Class's safety assist score to an impressive 86%.

See the Mercedes A-Class being tested by Euro NCAP, below

The Fiesta is offered with MyKey, a system that allows certain safety aspects of the car to be tailored to individual drivers such as young, inexperienced motorists. For example, this could allow parents to set a maximum speed and a more insistent seatbelt reminder.

Dr Michiel van Ratingen, Secretary General of Euro NCAP, said: 'Programmable keys open up a whole new range of possibilities, not just for parents and their children. The technology will also be of interest to companies with safe-driving policies and I look forward to more widespread application of this sort of system in the future.'

The only car not to score the maximum crash-test rating, was the three-star Dacia Lodgy. Euro NCAP was particularly critical of the budget brand's offering; making special note of the Lodgy's minimalist approach to safety assist technology. The Lodgy scored just 29% in this category. When asked, Dacia parent company Renault said there are 'no plans' to sell the Lodgy in the UK.

The full list of cars tested is as follows: