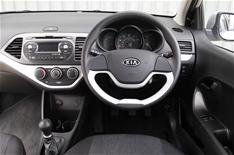 Im not usually a fan of voice-control functions, but the hands-free phone system in the Picanto is really quite excellent.

The set-up is simplicity itself, its easy to use and, most importantly, it doesnt call my mother-in-law when I ask it to put me in touch with my local kebab house.

I might have to raise my voice a little at motorway speeds to be heard by the person on the other end of the line, but all-in-all its a very grown-up system for a city runabout.

Our Kia Picantos 1.0-litre engine has just begun to loosen up at just short of 7000 miles, and is now considerably less thrummy than it was when new. Its always going to be slightly offbeat because its only got three cylinders, but its reassuring to find its now spinning smoothly and fun to rev to the redline.

Im still impressed by the cars packaging. After a meal in town, we drove home with two adults in the front and two in the back. There wasnt much room left, but everyone was comfortable. You cant make that claim in some considerably larger cars.

I did a lot of motorway miles the week before last and returned 41.1mpg not particularly good compared with the official figure of 67.3mpg.

Over the past two weeks, Ive been doing far more miles around town and along dual carriageways, so I had hoped for better economy.

The Picantos three-cylinder engine requires some rather ragged acceleration to keep up with the rest of the traffic on the roads, however, so the fuel consumption was actually worse than it was on the cruising motorway runs.