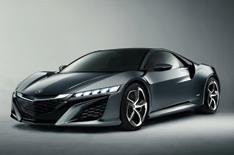 This Acura NSX Concept was orignally revealed at Detroit motor show, and gives an indication of how the interior of Honda's next-generation supercar might look.

Honda says the cabin is designed to give outstanding visibility and a sporty, low-slung driving position.

Inside, the concept car has a central touch-screen 'interface', which helps to cut down on clutter and creates a virtually button-free dashboard allowing the driver to concentrate on the driving experience, according to Honda.

Honda has previously said the new car will use a tuned version of its SH-AWD powertrain, which blends a V6 petrol engine and electric motor with a seven-speed dual-clutch transmission. There will also be two additional electric motors; one on each front wheel.

The NSX Concept wears the companys American premium Acura badge, but Honda has said the supercar will be sold in Europe, too.

A production model will be ready to go on sale by 2015, and Honda has confirmed it will carry the NSX badge.