More for you |
What Car?'s top 10 used electric cars (and the one to avoid)10 most unreliable SUVsWhat Car?'s best cars for less than £250 per monthGuaranteed discounts on our 2020 Award winners - save up to £19,366Skoda Kamiq long-term test review
Home
News
First pictures: 2010's new Beetle
news

* Larger Beetle on the way * Focus on use of interior space * Small van, pick-up and mini-4x4 variants on the way?... 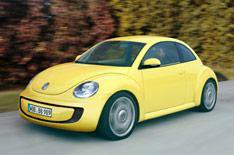 These computer-generated images show how the next-generation Volkswagen Beetle could look when it goes on sale in 2010.

The car is said to be larger than its predecessor, and designers are putting an emphasis on enhancing the use of interior space.

A soft-top cabrio is expected to follow shortly after the hatchback's launch, while a more sporty open-top Speedster model is also in the pipeline.

Insiders say VW is also considering creating small van, pick-up and mini-4x4 variants of the Beetle, although none of these has been given the go-ahead yet.