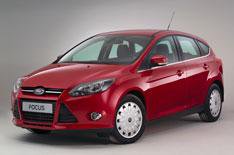 The Ford Focus Econetic Technology is the most fuel-efficient conventionally powered family hatchback the world has seen. Or, put another way, it's a Focus with the same CO2 output as the cleanest Prius, better fuel economy and without a hybrid drivetrain in sight.

Ford has employed a raft of measures to make sure the Focus dips under the 90g/km of CO2 mark. Although not yet a critical tax break barrier in the UK, it is only a matter time before it becomes so.

The engine is Fords familiar 1.6-litre diesel, but heavily modified to reduce its internal friction and improve the efficiency of the combustion process and cooling.

Other features such as regenerative braking, improved body aerodynamics, longer gearing and low-rolling-resistance tyres help to reduce CO2 emissions by a startling 20g/km compared with the standard Focus 1.6 TDCi despite the Econetics engine producing more power: 104bhp compared with 94bhp. The cleanest VW Golf has the same power, but emits an extra 10g/km of CO2.

Whats it like to drive? Rattly, at least until youre up to speed. Despite its state-of-the-art technology, the engine actually sounds like a rather old-school diesel, especially if you try to exploit the rather modest available performance.

Once youre up to speed it does quieten down and will happily cruise at any sensible speed, so long as youre not on an incline. Top gear performance is quite poor thanks to the lengthened ratios, however, meaning you often have to change down a gear or two to maintain reasonable progress, defeating the point of having longer gearing in the first place.

Of course, limitations like this never show up in calculations made to determine official consumption figures.

Otherwise it is pure Focus and as capable and comfortable as that suggests.

Whats it like inside? The dashboard reveals this is no ordinary Focus. There you can call up three flower graphics whose petals illuminate according to your gear choice, anticipation and speed. Its simple, effective, non-intrusive and encourages you to optimise your driving.

Should I buy one? The price is all-important and we wont know that until May.

The Econetic will benefit from all tax and congestion charge exemptions, not only now, but far into the future. However, it remains to be seen whether in real-world driving it really does return over 15mpg more than the standard 1.6 diesel Focus.

The previous-generation Focus Econetic was priced at between 500 and 750 more than the car on which it was based according to model. If Ford can maintain or reduce that gap, the Econetic might make good sense for long-term, high mileage users.