The theory behind diversification is simple – take the product you’re best known for and put a fresh spin on it to capture a larger audience. Take Apple, for example. It introduced the iPhone in 2007 as a single model, but today’s iPhone 13 can be had in standard or Pro forms, each with two screen sizes and a plethora of color and storage options. Car makers like to diversify too, and that explains why the Ford Focus family is so large.

Now freshly facelifted, the Focus might be most familiar to you in five-door hatchback form, but there’s also an estate model to consider, a sporty ST variant, and even a chunky Active version designed to bridge the gap between conventional family cars and SUVs.

Whichever version of the updated Focus you go for, it’ll have a more muscular look than today’s model, with a higher bonnet line and the Ford badge relocated from the top of the bonnet to the more imposing front grille. 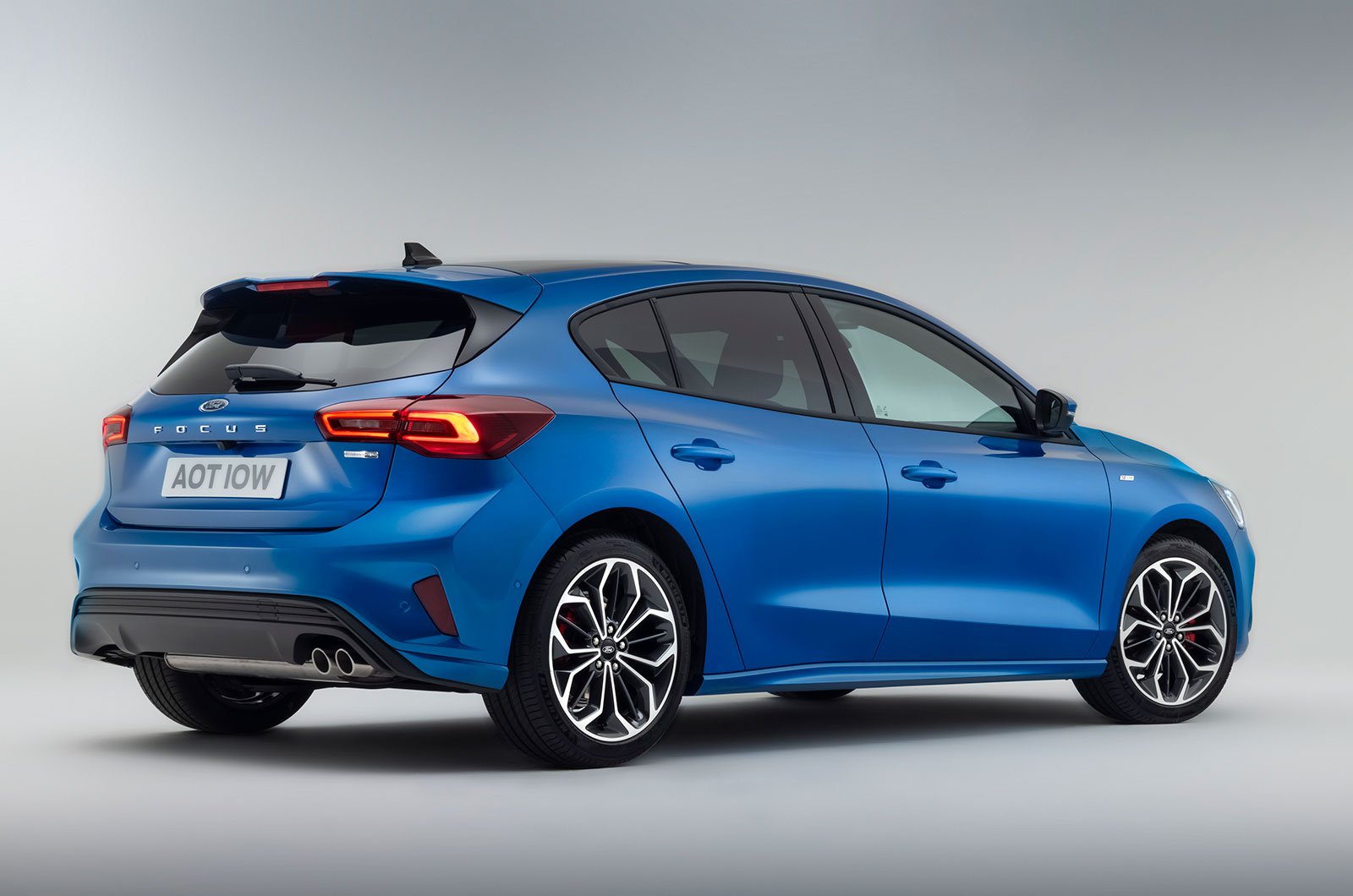 LED headlights now come as standard on every Focus, and include integrated fog lights, allowing the light clusters to be slimmer than before. Specific design flourishes mark out each version; Titanium models, for example, receive extra chrome trim around their grilles and side vents, while sporty ST-Line models feature a body kit that includes a rear diffuser and spoiler. Active versions, meanwhile, wear chunky body cladding around their lower edges for a rugged, SUV-inspired look.

Among the petrol engines available are 1.0-litre mild hybrids with 123bhp and 153bhp. The electrical power that their hybrid systems provide isn’t sufficient enough to move you on its own, but it assists the engine under low-load conditions, such as when you’re on the motorway, and helps you get up to speed faster. Either way, it has the potential to reduce your fuel bills, and the 123bhp version is the engine that we recommend in the current Focus. Fuel economy ranges from 47.9 to 53.3mpg.

The 123bhp petrol is also available without mild hybrid assistance, and higher-mileage drivers might prefer the 1.5-litre diesel engine, which produces 118bhp, returns up to 61.4mpg and emits 121g/km of CO2. Gearbox options include a seven-speed automatic and six-speed manual, and buyers can adjust the response of the accelerator pedal and steering through Normal, Eco and Sport driving modes. 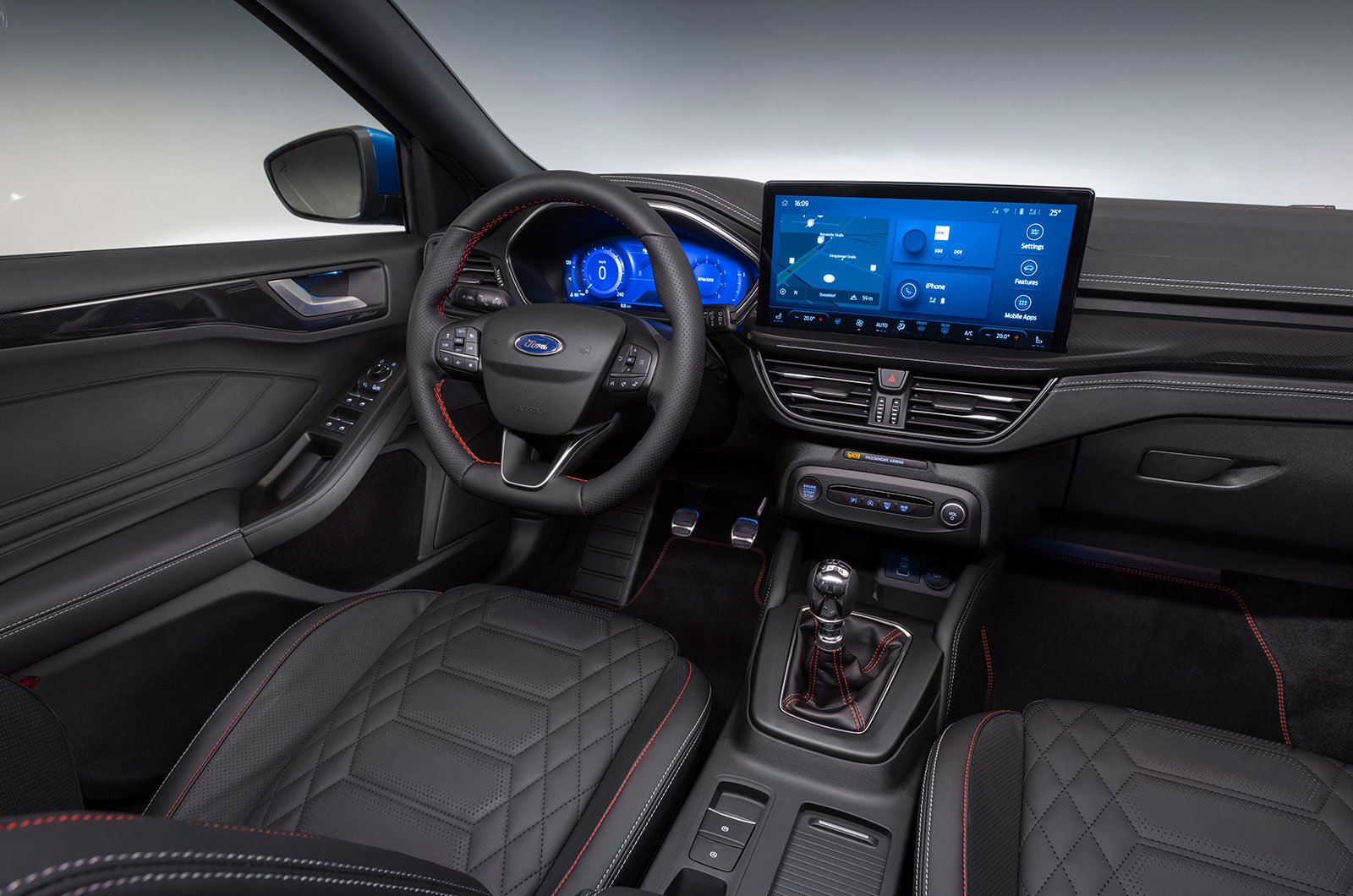 If you go for the Focus ST hot hatch, you’ll get a 2.3-litre petrol engine delivering 276bhp.

The Focus is now notable for not being offered with the option of plug-in hybrid power, which is available on rivals including the Peugeot 308, Skoda Octavia and class-leading Seat Leon.

Inside you’ll find a new 13.2in touchscreen running Ford’s Sync 4 software – this is the same setup as you’ll find in the Mustang Mach E electric SUV, and we praised it in that car for offering clear graphics and a logical menu structure. The system also offers wireless connections for Apple CarPlay and Android Auto smartphone mirroring. 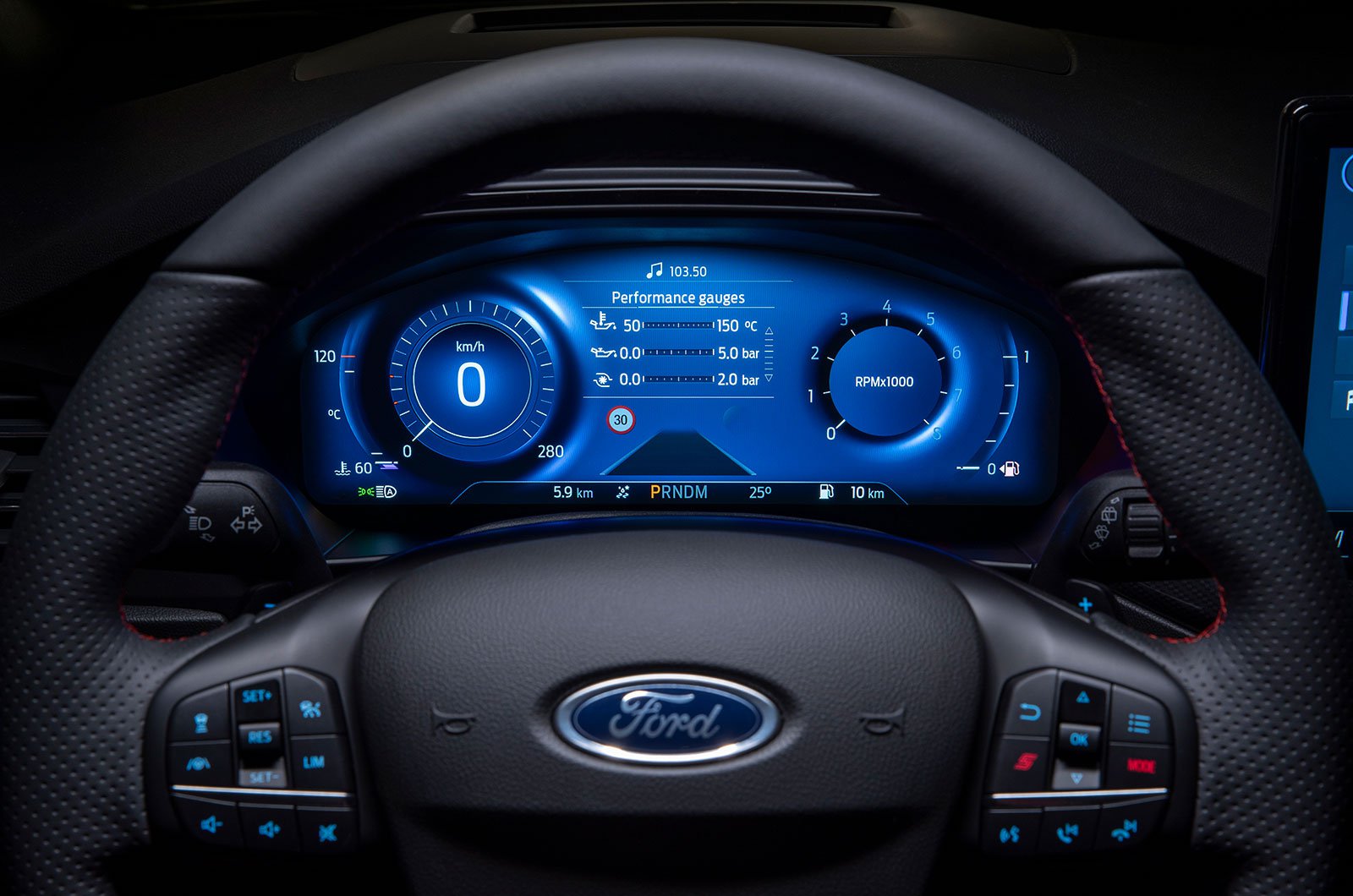 Every Focus also now comes with digital dials, and while they aren’t as configurable as those of some rivals, they should still do a good job of putting a wealth of driving information right in front of you.

Available driver assistance features include adaptive cruise control with lane-keeping assistance, a blind spot monitoring system and a new Intersection Assist system that can apply the brakes if it senses that you’re turning into the path of an oncoming vehicle.

In the Focus Estate, the adjustable boot floor is now hinged in a way that helps to divide your luggage, but the overall boot space is unchanged; it can hold about the same amount as the Volkswagen Golf or Seat Leon Estates. 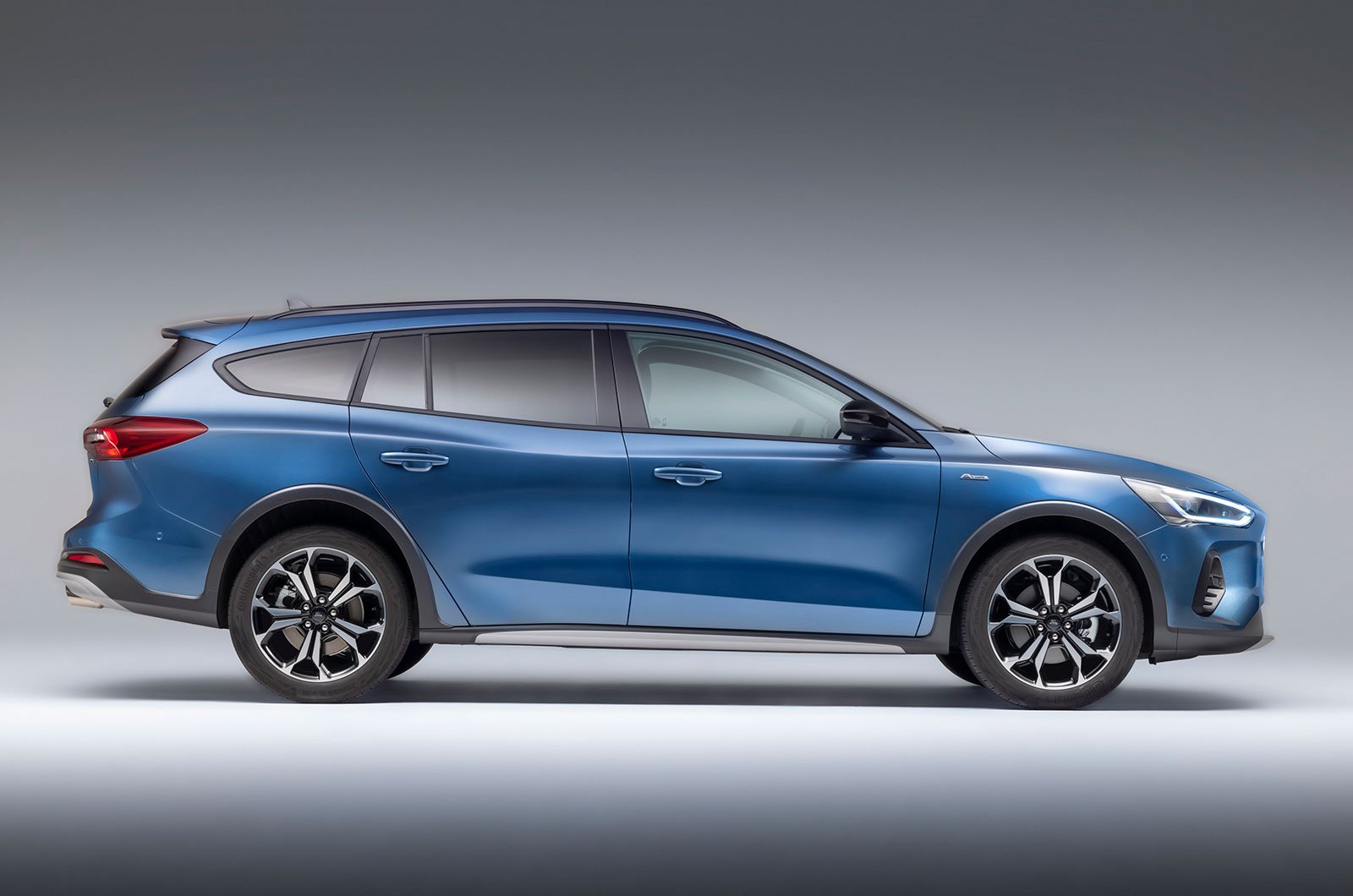 The updated Focus hatchback starts from £22,465, which is only a slight increase over the current car. This means the Ford will be cheaper than the Golf but more expensive than the rival Leon or Kia Ceed. Expect similarly small price increases for the Focus Estate and ST versions, too.