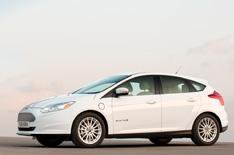 The Ford Focus Electric is like the standard car, but with the petrol or diesel engine replaced by an electric motor. Ford says the car has a range of around 100 miles on a single charge. A full charge of the battery takes around 7.5 hours through a domestic socket.

Whats the Ford Focus Electric like to drive?
With instant throttle response delivering maximum urge from the moment you touch the accelerator, the Focus Electric can make conventional cars seem rather slow witted. Its all delivered in near-silence, too, with only a slight whistle to interfere with the calm.

However, you only need to accelerate to beyond town speeds to realise the car's limitations. Acceleration to 60mph is adequate, but beyond that it tails off dramatically.

A big problem is that because the Focus Electric is an adaptation of the conventional Focus rather than a unique design like the Nissan Leaf Ford has been unable to tailor its car so precisely to the role. So, while the Leaf places its batteries low down under the middle of the car where they help to improve the way the car handles, the Focus enjoys no such benefits.

Ford estimates the Focus Electric weighs between 150 and 200kg more than a conventional Focus and it feels every gramme of it. That said, the ride quality remains as good as ever.

Whats the Ford Focus Electric like inside?
Luggage space aside the batteries fill up the boot the cabin itself is as spacious as in any other Focus. In fact, the interior is little different, aside from an electronic dash that tutors you in economical driving, and alerts you to any power-sapping ancillaries you may have running.

Should I buy one?
It won't go on sale in the UK for at least a year, but it's about to hit showrooms in the US, where it's been priced squarely against the Nissan Leaf so expect a British price of around 30,000.

Even if Government grants remain available when it goes on sale here, its still a lot of money for a converted Focus. Its hard to see why anyone wouldn't just buy a Leaf now guaranteeing the 5000 grant and getting a purpose-built electric car.