More for you |
2021 DS 9 luxury car revealed: price, specs and release dateWhat is GAP insurance and how much should you pay for it?Why does the new Hyundai i10 get five stars?New MG ZS EV vs new Renault Zoe2020 Jaguar XE long-term test review
Home
News
Green credentials of EVs questioned
news 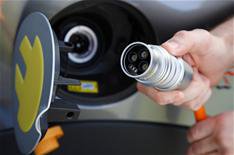 Electric cars will only ever be as 'green' as the electricity that charges their batteries, a new report has claimed.

The study says that because the UK produces most of its electricity by burning coal, electric cars are no more environmentally friendly than low-CO2 emitting petrol or diesel cars.

That's the verdict of the Royal Academy of Engineering, in its Electric Vehicles: charged with potential report.

'Swapping gas-guzzlers for electric vehicles will not solve our carbon emissions problem on its own,' says Professor Roger Kemp, chairman of the Academy's Electric Vehicles working group.

'When most electricity in Britain is generated by gas and coal, the difference between electric cars and a small, low-emission petrol or diesel car is negligible.'

The report says that the introduction of electric vehicles must be accompanied by what it calls the 'total decarbonisation of our electricity supply', and says the UK will need new nuclear power stations, wind farms and tidal barrages to ensure a greener power supply for electric vehicles.

It also urges the new Government to indicate how it intends to replace fuel taxation as the demand for electric vehicles grows and to outline its long-term policy for electric cars to help provide stability that will allow the electric car market to grow.

The future of cars
The Royal Academy of Engineering says electric cars will not be a direct replacement for petrol and diesel cars. It believes their introduction would change how people use cars, believing there will be 'mainstream acceptance of shared vehicle use as a solution to personal mobility'.

It says the introduction of large numbers of electric cars would be likely to go hand-in-hand with new ownership models, whether by short-term vehicle leasing, 'power by the hour' contracts for batteries or other such arrangements.