History of the electric car

We take a look at the surprisingly long history of the electric car and the key innovations that we're still benefitting from today...

You might think that electric cars are a relatively new invention, but actually scientists were exploring the potential of using electricity to power a car – or what was actually back then a carriage – from the mid-19th century.

The true inventor of the electric car is still debated today. However, if you want to trace the electric car back to its humblest origins, in 1828 Hungarian inventor Anyos Jedlik created a type of electric motor that he used to power a small model carriage.

The invention of an electric carriage that could carry people, meanwhile, took place at some point between 1832 and 1839. The exact year remains unknown, but Scotsman Robert Anderson is widely credited as having invented an electric carriage with crude non-rechargeable batteries in that time.

Between 1834 and 1835, American Thomas Davenport also invented an electric carriage, while scientists from Holland and Hungary are credited with the invention as well.

Perhaps most importantly, though, in 1865 French physicist Gaston Plante invented a rechargeable battery that would make electric motoring a more practical proposition.

Indeed, all of today's purely electric cars – from the Renault Zoe to the Tesla Model S – owe their existence to Plante's breakthrough and require plugging in to recharge their batteries. But in the near future you might be able to simply drive your car onto a special plate in order to recharge it wirelessly. This is known as inductive charging.

It certainly wasn't an option for Victorian inventor Thomas Parker, but in 1884 he did create an electric car that he would regularly drive to work in his hometown of Wolverhampton. In fact, Parker's electric car was being driven more than a decade before the first petrol-powered cars arrived in the UK. And it's worth remembering that Parker's invention came a year before the world's first production car – the Benz Patent-Motorwagen.

Parker's car had the potential to be mass produced, too, but sadly while a second prototype was built and sent to Paris, the ship carrying it sank in the Channel.

The first electric carriage to enter series production was created by William Morrison from Iowa. Morrison had previously built a number of electric car prototypes, but it wasn't until 1891 when he signed a contract with the American Battery Company to both manufacture and promote his invention that things would begin to take off.

The specifications of the 'Morrison Electric' were mostly poor by today's standards: its electric motor developed just 4bhp, the batteries took 10 hours to recharge, and top speed was between 6 and 12mph. However, a range of 100 miles was said to be achievable, which is actually very impressive given that many of the electric cars of today can barely manage more, and some still offer less; the Smart EQ ForTwo, for example, has an official range of 99 miles.

In 1895, a modified version of the Morrison Electric was entered into the first automobile race to be held in America. The Chicago Times-Herald race was organised to promote America's automotive industry and offered $2000 to the winner.

The first electric cars to be used as taxis came along in 1897, when the Electric Carriage and Wagon Company of Philadelphia supplied 12 cars for use in New York. The same company produced a new model, the Electrobat, two years later, and in 1899 100 such cars were being used in the city. Sadly, a fire in 1907 destroyed much of the company's vehicle stock, causing it to close down.

In 1898 another new electric car was launched, and this one came from Porsche. Dubbed the P1, it was powered by a 3bhp motor, had a top speed of 22mph and a range of up to 50 miles. And while such figures seems paltry compared with those of the Taycan electric car, which Porsche will launch in 2020, back in the day they were still enough to give the P1 victory in a 25-mile electric car race; it finished 18 minutes ahead of the second-place car. 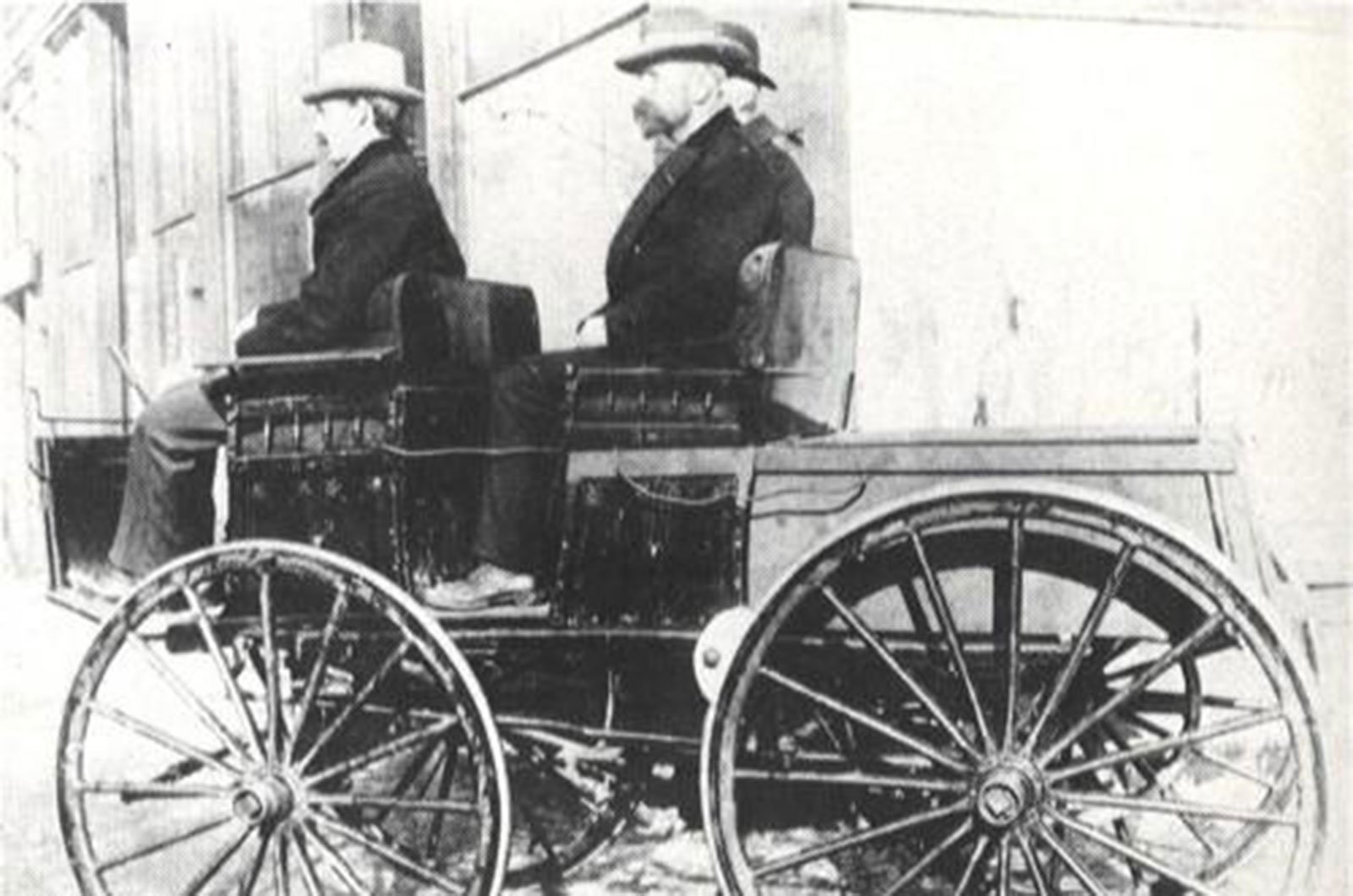 Another landmark was reached in 1899, when the La Jamais Contente (which translates to The Never Satisfied), a Belgian-made electric car, became the first road vehicle to travel at more than 62mph. Powered by two electric motors producing a combined 67bhp, it was driven by Belgian driver Camille Jenatzy and set a new land speed record that would stand until 1902, when it would be broken by a steam-powered car which travelled at 75mph.

The popularity of electric cars was rising sharply at this point, especially in America. In fact, of the 4192 cars produced in the US in 1900, 28% were electric. Buyers were said to have preferred electric cars because they didn't have the vibrations, smells or noise of their petrol- or steam-powered equivalents.

The success of electric cars had stalled by 1912, however, largely thanks to Henry Ford, whose mass production techniques (and subsequent success with the Model T car) had brought down the price of petrol-powered cars, making them significantly cheaper than electric alternatives. For example, an electric roadster in 1912 sold for $1750, while a petrol-powered car could yours for just $650.

In fact, electric cars had all but disappeared from the US by 1935, and development wouldn't begin again until the 1960s and 1970s, when a need to find alternative fuels to help reduce the problems caused by exhaust emissions surfaced.