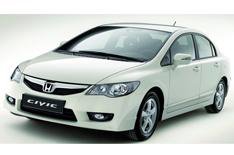 The Honda Civic Hybrid has taken a starring role alongside Keanu Reaves and Jennifer Connelly in the latest Hollywood blockbuster The Day the Earth Stood Still .

Six of the Hondas were supplied for use in the movie, with two of the cars which were driven by Connelly - having to be cut open to assist with the filming.

The Day the Earth Stood Still is a contemporary reinvention of the 1951 classic movie of the same name.

Reeves plays Klaatu, an alien whose arrival on the planet triggers global upheaval, while Connelly gets caught up in his mysterious mission.

Can the Honda Civic Hybrid save the world? You can find out at cinemas now.