Honda's revitalised hatchback offers plenty of kit and striking looks, but how well will it cope with family life? We've got six months to find out...

If the very words ‘Honda’ and ‘Civic’ have you stifling a yawn, take a look at this latest edition to our long-term test fleet. Honda was stung by criticism of the previous model, and as a result the all-new 10th-generation Civic has had more time and money pumped into its development than any other car in the firm’s history.

It’s longer, lower and wider than the car it replaces, with a less fussy look inside and out. And while it’s not exactly handsome, or even cohesive, there’s a drama to its design that seems to grab people’s attention.

Another problem with the outgoing Civic was that, in a class of highly polished rivals, it always felt a little sub-standard to drive. But for this new one there’s been a complete under-skin rethink: the distance between the front and rear axles has been stretched and the old rear suspension has been binned in favour of a more sophisticated set-up.

All of this is allied to some new engines that promise both more performance and better fuel economy.

I’ve now got the next six months to find out if Honda’s massive investment in the new Civic has really paid off. And so eager was I to get started that I picked it up directly from the company’s factory in Swindon, where all five-door Civics will be built, regardless of where they’re sold in the world. 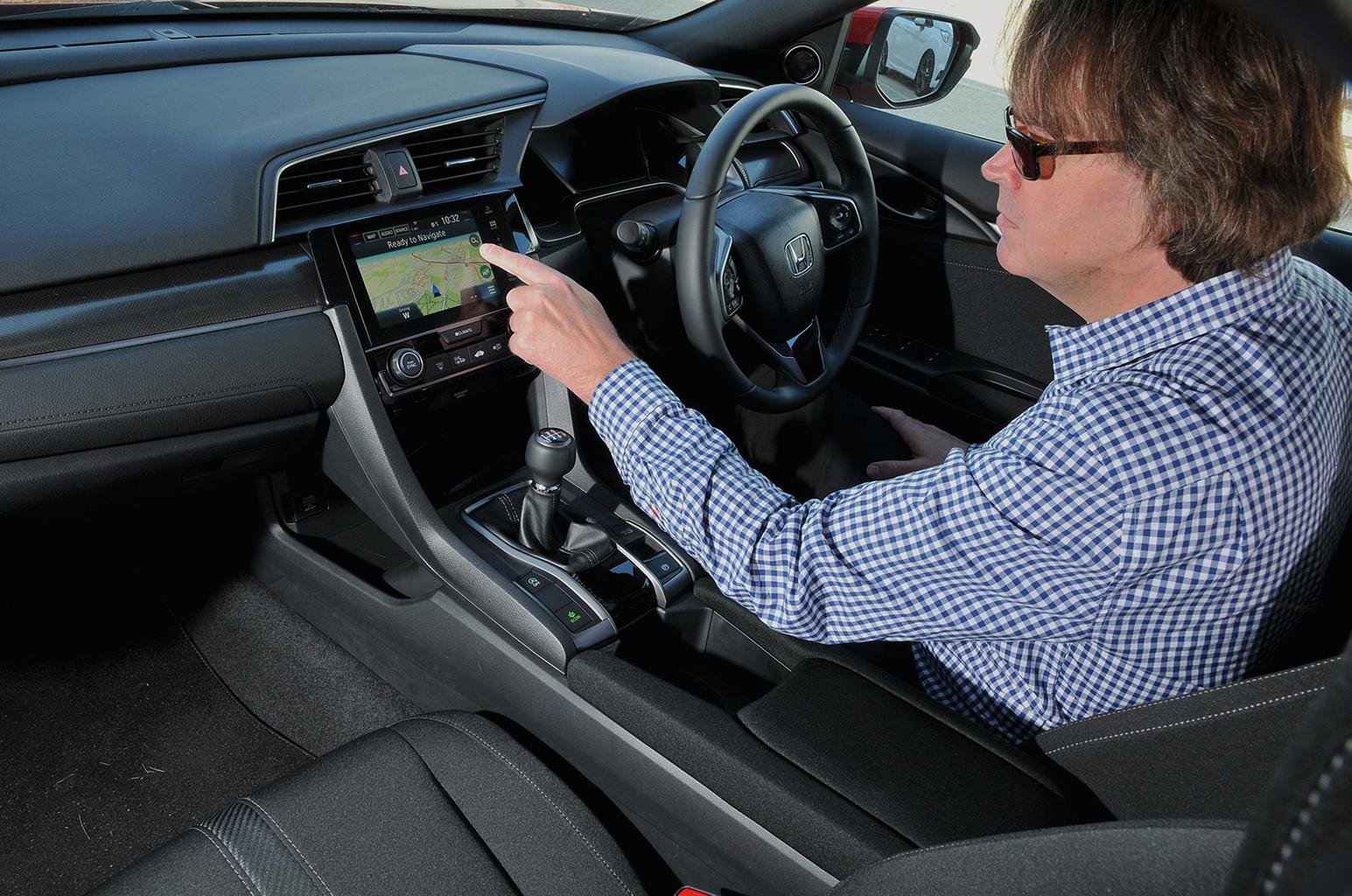 First impressions are definitely favourable. Our car looks especially good, I think, in its Rallye Red paintwork, which itself marks a sharp contrast to the black of the alloy wheels and the front grille and some of the car’s detailing.

I like the look of our SR trim, too. All Civics are well equipped, getting lots of standard safety features, including automatic emergency city braking and lane departure warning. However, SR brings desirable extras such as 17in alloys, dual zone climate control, a 7.0in touchscreen with sat-nav, and a rear parking camera.

Okay, the interior of the Civic is more conventional than before, but it’s all the better for it. Gone is the confusing dual-level dash, replaced by an instrument cluster that’s easier on the eye and more logically laid out.

A bar still cuts across the rear window, making the camera more than just a luxury. But that bar is a lot slimmer than it was before, the driving position feels much lower and sportier, and you’ll have no problem finding the right set-up, even though the angle of the seatback is adjusted by a ratchet lever rather than the more precise rotary knob found in some rivals.

There’s plenty of room in the car for my family, even if that sloping roofline robs taller back seat passengers of some head room. 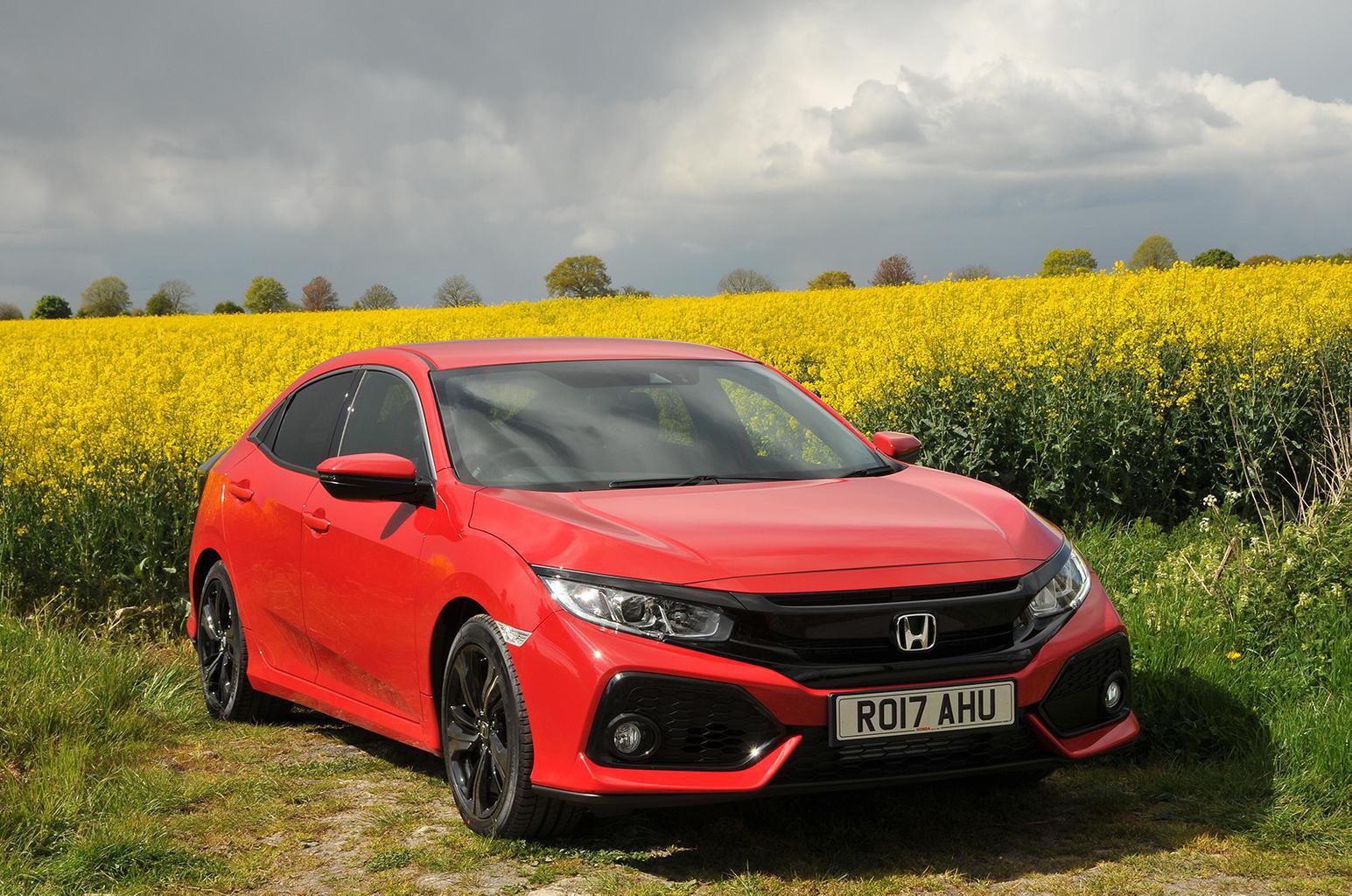 What’s more, the boot seems vast, and a false floor and an extra storage area underneath it enhance practicality further. I can see this last feature being particularly useful when I want to stop bags of shopping sliding around on my way home from the supermarket.

Our car has the less powerful of the two engines available at launch: a 127bhp 1.0-litre three-cylinder unit, with official figures of 55.4mpg and 117g/km of CO2. The other option is a 1.5-litre, while a 1.6-litre diesel and a Type R hot hatch will join the line-up soon.

Does it matter that our car essentially has an engine the size of a handkerchief? I’d have to say no. Even with my wife and kids along for the ride, the Civic delivers respectable performance. And it really is enjoyable to drive, with precise steering and a slick gearchange.

In truth, though, the new car represents a return to form rather than a sudden boldness on Honda’s part. During its 45-year life, the Civic has mostly amassed a deserved reputation for engineering flair and unsurpassed reliability, and has actually been one for going to extremes, having been at various stages a thrifty city car, a family hatchback, an MPV, a saloon, an estate, a coupe and a ferociously fast hot hatch.

I’ll report back here regularly, and in the unlikely event I catch myself yawning I’ll let you know.