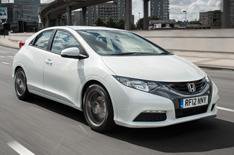 The Civic Ti is based on the 1.8 i-VTEC SE petrol model. It gets a range of cosmetic upgrades over the entry-level trim, including 17-inch wheels and colour-coded wheelarches. There are no mechanical changes.

Inside, the Ti adds a leather-trimmed steering wheel and gearknob, and Bluetooth connectivity.

Only 1,000 Civic Ti models will be built, and buyers have a choice of white, red or silver paintwork.

Based on 1.8 i-VTEC SE model; there are no mechanical changes