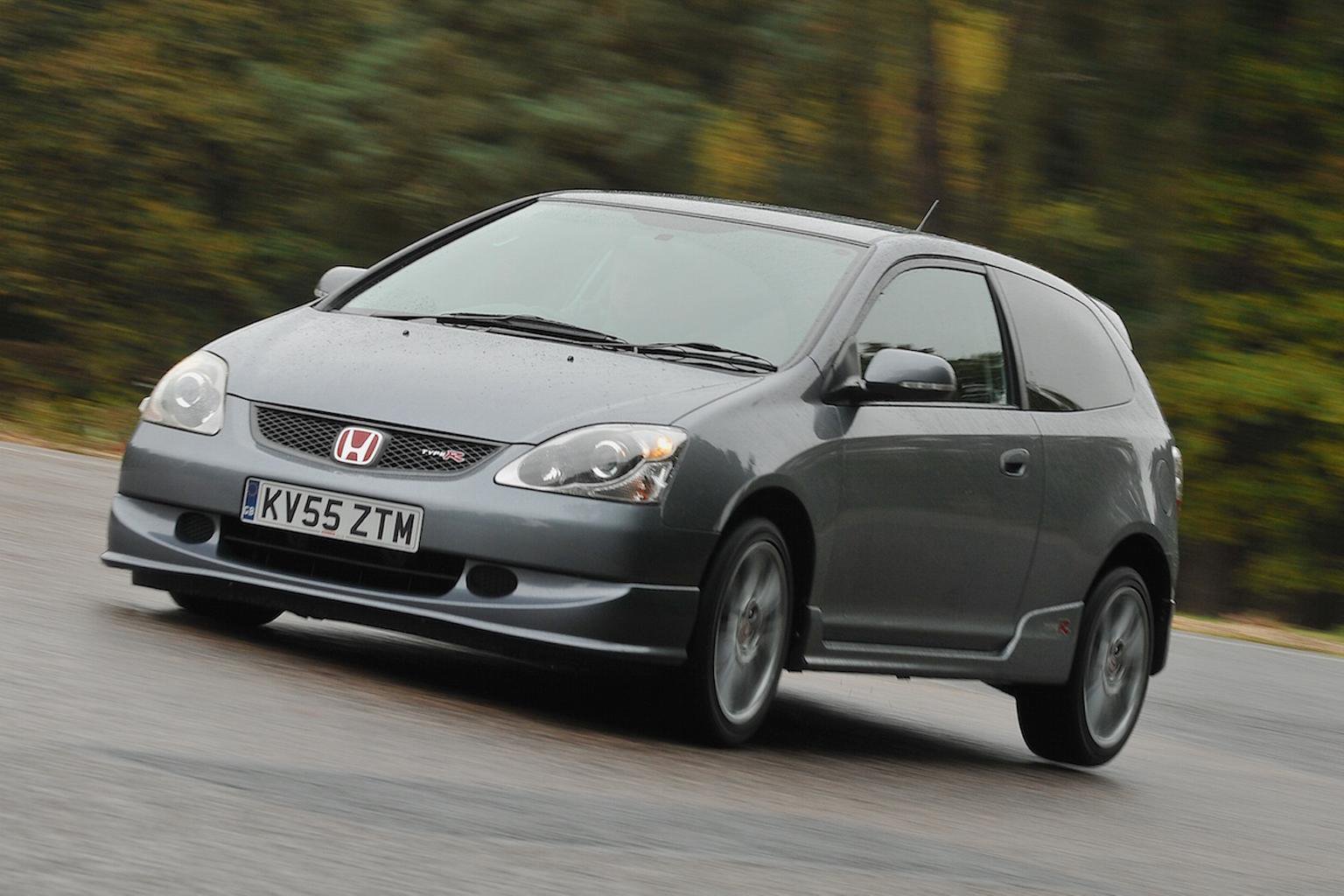 The hot hatchback. A pretty simple recipe when you think about it. Take one ordinary family hatchback, fit it with a more powerful engine, maybe lower its ride height, possibly stiffen its suspension and viola, one heated-up hatch.

Well, at least that used to be the case. Climb into one today and not only do they have the sort of power that in days gone by would have embarrassed supercars, but nearly all of them also have different driving modes. You’ve got various suspension states, switchable exhausts, changeable steering and variable throttle response. Which, means buttons. Lots of buttons.

It’s refreshing, then, that when you climb into Honda’s second-generation Civic Type R, there is absolutely none of that. It was launched in 2001 - a simpler time. A time before social media, before smartphones and when the internet was a relatively new phenomenon. It was also a time of a single state of tune for everything: engine, brakes, steering, throttle, the lot. Lovely. 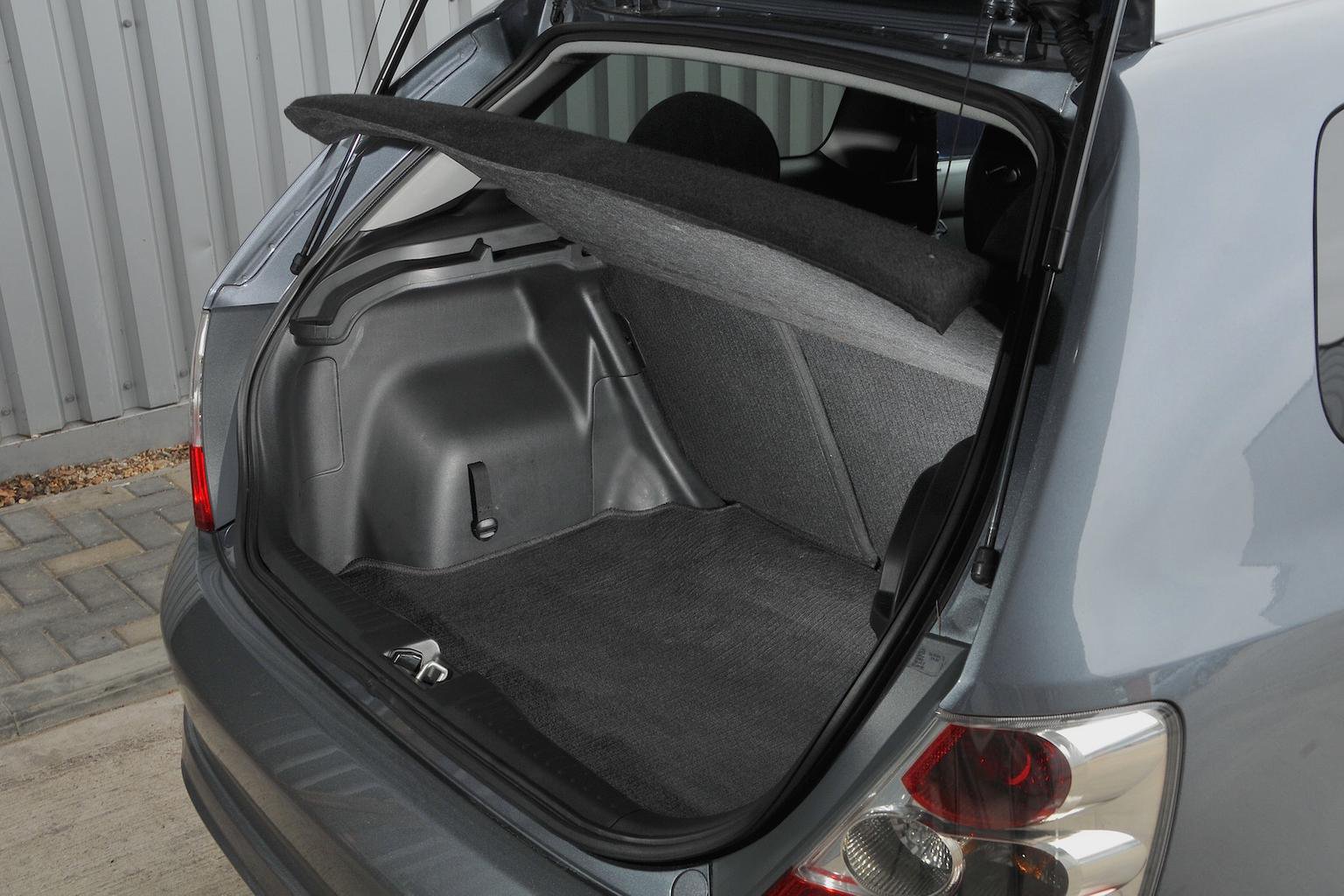 Although this generation of the Civic Type R was the first one British car buyers were able to buy, Honda had actually already introduced one four years earlier, codenamed EK9. That, however, was never officially sold here, even if the standard Civic on which it was based, was. Which meant we had to wait until 2001 for the so-called EP3 you see before you.

It was well worth the wait. Honda fitted the EP3 with a high-revving 2.0-litre petrol engine, free from turbochargers, featuring the firm’s famous VTEC technology and producing a heady 197bhp. It came in three-door form only, had a closely spaced six-speed manual gearbox and a bespoke suspension set-up and was built just off the M4 in Swindon.

Yet although the Type R came with figure-hugging front sports seats, its rear bench seat resembled that of lesser Civics and it featured the same hatchback boot and ‘bread van’ body shape, a nickname that became attached to this generation. So it had the punchy engine, the sporty name, aggressive looks, a sorted chassis and decent practicality. It was, and is, the very definition of a hot hatchback. 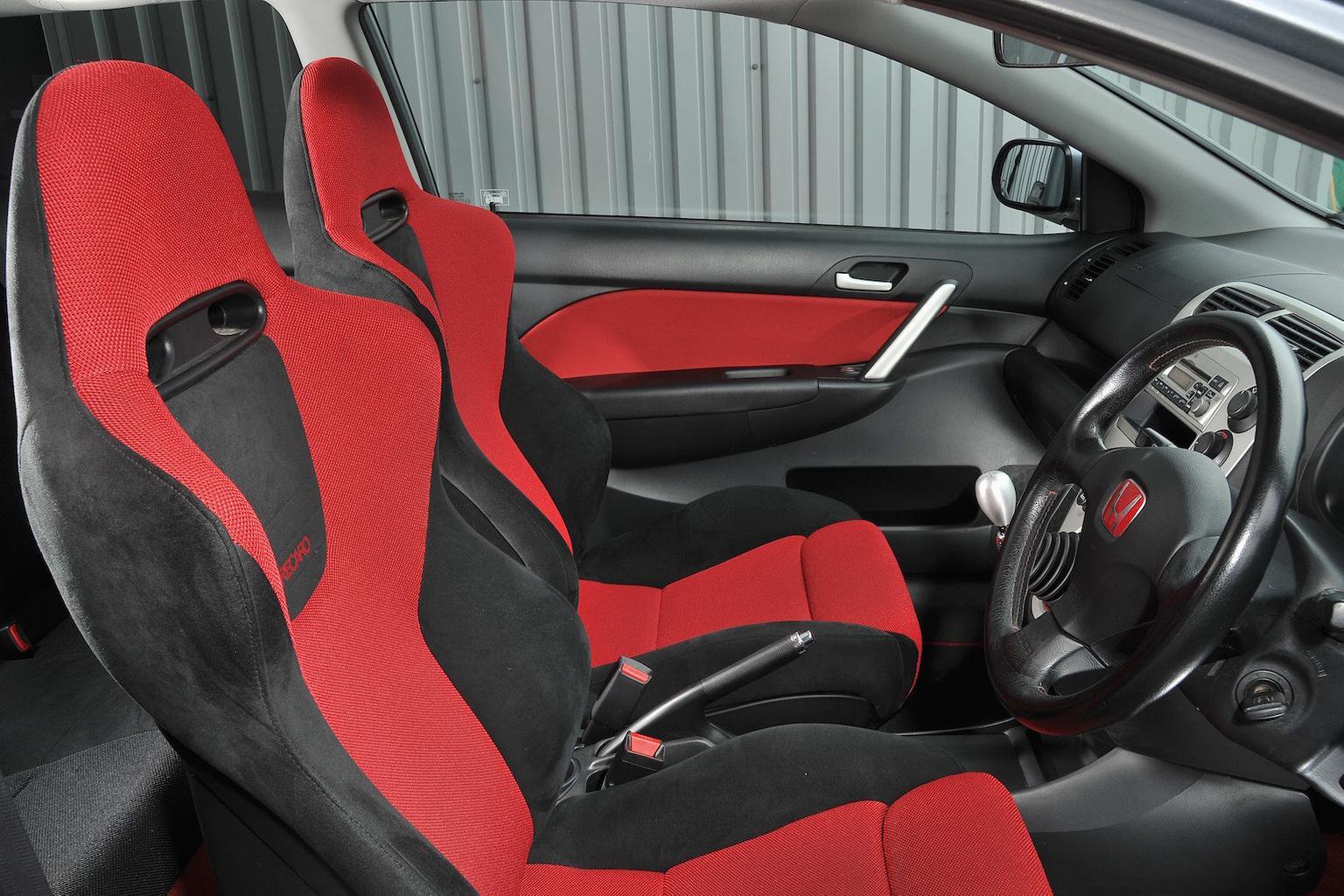 So good was the EP3 Civic Type R that we named it our Hot Hatch of the Year not once, but twice, in 2002 and 2003. We were looking for the best in driver enjoyment, “so a strong, sweet engine and well-balanced, compliant chassis are prerequisites”, we said. 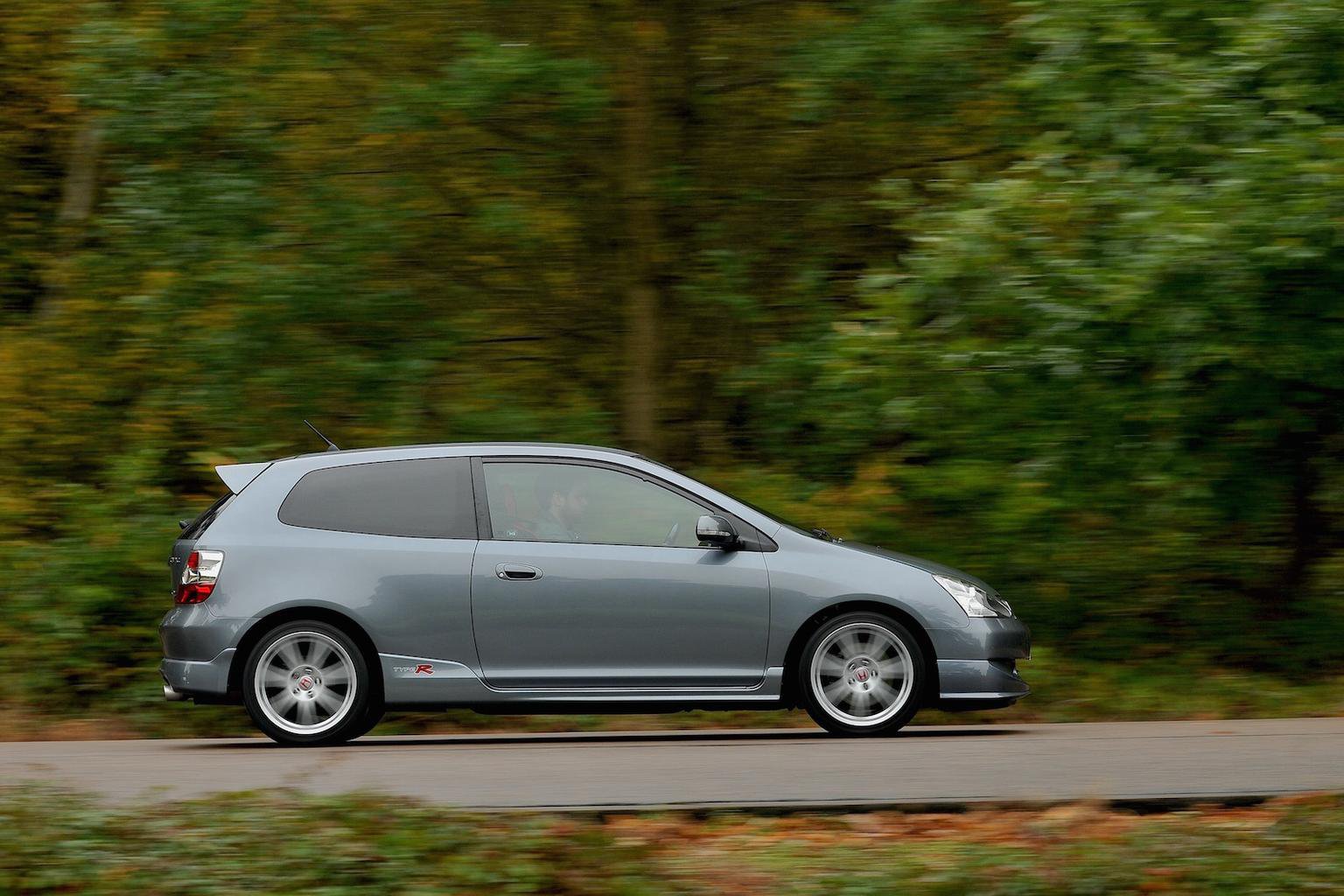 As a place for the driver to sit, it’s superb. In today’s cars, people are more worried about where to stick their smartphone cradle, if their USB cable reaches the port and whether the thing has Apple CarPlay. Jump behind the Civic’s wheel and there’s no USB socket and no Bluetooth, just a brilliant driving position with enough adjustment and a gearlever that’s mere centimetres from the steering wheel.

The 2.0-litre petrol engine fires to a fairly tedious idle, it has to be said, but blip the throttle and all that changes. Rarely do engines rev quite so aggressively, and because Honda’s VTEC technology means even more punch beyond 6000rpm, things only get more lairy the harder you push. And all this is accompanied by a raw, muscular engine note under load.

That said, the Type R can a bit of a handful on wet, slippery winter roads. Floor the throttle and up go the revs, often causing the front wheels to lose traction and the steering wheel to squirm about in your hands. Let’s just say the full extend of the Type R’s power is best used on dry days.

But pick one of those days and the Type R will sprint from a standstill to 60mph in less than seven seconds. That’s quick, even by today’s standards, while the fact that its six forward gears are fairly short means it feels even quicker than the numbers suggest.

It steers sweetly, too, and this never changes, because there are no driving modes – praise be! In fact, it feels extremely agile and changes direction willingly – so willingly that you often need to be careful when on the brakes and coming off the throttle, because the rear axle isn’t afraid to start moving about once the weight is thrown forward.

There must be some bad news, though, right? Well, yes: the ride is pretty stiff. It helps keep the Civic’s body flat through corners, but the latest hot hatches, with their more modern suspension set-ups, manage to do the same while cushioning sharp bumps better. 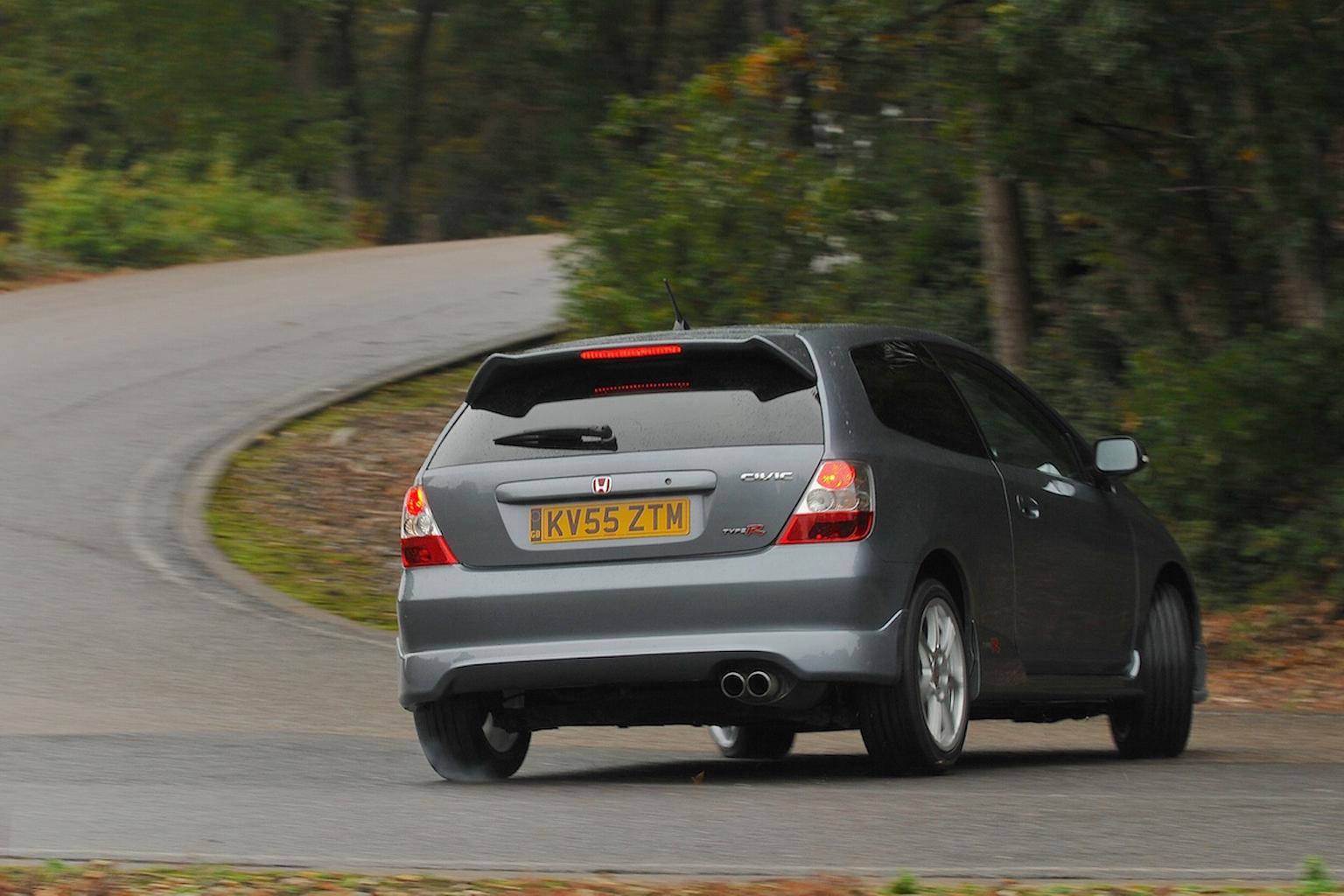