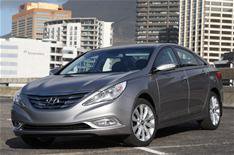 When established players in the family car class are struggling to sell their wares, its a brave move for Hyundai to even contemplate bringing the Mondeo-rivalling i40 to the UK. Itll arrive next spring, first in the form of a lifestyle estate, followed by this rather sexy saloon a few months later.

We had a few hours behind the wheel of an i40 (or Sonata as it was badged) in South Africa. The car we drove was South African spec our cars are likely to ride and handle somewhat better than the cumbersome (if comfortable) car we drove but the look, space and equipment will largely be similar.

Its the look of the i40 that will draw many people into Hyundai showrooms who might not have been in one before. Its no surprise to hear that Hyundai has recruited Mercedes designers (and some from BMW) because the i40 has more than a hint of Merc CLS about it. From the sparkling grille (UK models might have theirs toned-down slightly) and the oversized lights to the coup-like roofline and deep creases sweeping upwards towards the back of the car, we were constantly reminded by onlookers that it looked like a Merc.

Were not talking Merc money, though. Were not even talking Ford money well, not Mondeo prices, anyway. Expect the i40 to cost less than the current entry-level Focus at around £16,000.

The 2.0-litre petrol engine we drove might well come to the UK in direct injection form, but the main interest will be in the new 1.7 diesel and 1.6 direct injection petrol engines that make their debut in the iX35 later this summer both promise running costs to match the low purchase price.

The 2.0-litre engine isnt especially punchy, but refinement is okay and the six-speed auto box that our car came with was smooth and quick to respond. It even had paddle shifters behind the steering wheel.

The cabin is another example of the Korean car makers stepping up to European standards. Its smart, with mostly plush plastics, although Euro-spec cars will be even better.

Theres decent space in the front and, while not quite as huge as the Mondeo, nobody will be moaning about a shortage of legroom. Headroom is pretty good, too. However, the slopey roofline might warrant a few moans from taller passengers.

The boot, too, has plenty of space for bags, golf clubs, suitcases and pretty much anything you can throw at it. The rear seats fold down via a lever in the boot.

However, Hyundai is bringing an even more stylish estate version into the UK first to cater for our must-have-a-hatch family car market, and with prices starting at around £17,500, itll have a fair advantage over increasingly expensive mainstream models.

As well as a favourable list price, the i40 will be better equipped than most, with the promise of low company car tax bills thanks to those frugal CO2 friendly engines.

Even with a more European-biased suspension set-up, we wouldnt expect the i40 to be a more enjoyable car to drive than the Mondeo or Mazda 6. Then again, if it undercuts both by a few grand, it could put a spark back into the ailing family car market.

Stylish and great value, if short on dynamic flair.