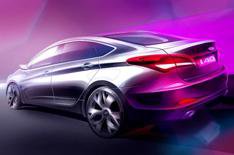 Hyundai has released this sketch of its forthcoming i40 saloon, which will be revealed at the Barcelona motor show next week.

The Ford Mondeo rival is expected to be on sale here by the end of the year.

The engine line-up is expected to be similar to the i40 estate, but more details will be revealed at the Spanish show, which takes place from May 12.

Hyundai i40: game changer?
We recently invited readers to What Car?'s HQ to see the i40, but we didn't tell them it was a Hyundai.

We covered up all of the markings that could identify the brand and asked readers what they thought of it one-by-one many were surprised when it was revealed to them.

Take a look at our video to see what they thought.