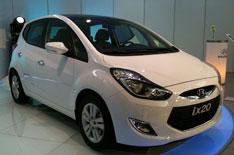 The car will be available with a choice of two diesel engines and two petrol engines.

An eco Bluedrive version will have CO2 emissions of 114g/km and 66mpg.

The 89bhp version emits 140g/km and is capable of 46mpg. Those figures improve to 130g/km and 50.4mpg with the Bluedrive model.

The range-topper will be a 123bhp 1.6-litre petrol. It will be available in just standard form (no Bluedrive option) and is capable of 43mpg and emits 154g/km of CO2.

All cars will come with air-conditioning and parking sensors as standard, too.

Options include a panoramic sunroof, which actually opens, and a reversing camera incorporated into the rear-view mirror.

Initial impressions
The interior quality of the ix20 is on a par with that of the ix35. There's good front headroom and rear legroom. The boot size is reasonable and has a false floor.

The car will be on show at the Paris motor show at the end of the month. Also on the Hyundai stand will be the Genesis Coupe. It will be come with either a 2.0-litre turbocharged petrol engine or 3.5-litre V6. The car has been confirmed for sale in Europe although no decision has been made yet if it will go on sale in the UK.

Similarly, the Equus executive car, also on show in Paris, is being evaluated for Europe as well.