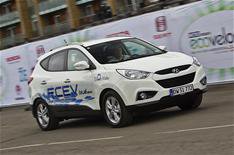 Hyundai has confirmed that it could offer a hydrogen fuel cell-powered car in the UK by 2015, when it puts the next generation of its ix35 FCEV (fuel cell electric vehicle) model into mass production.

Hyundai says that it plans to sell 10,000 fuel-cell cars in 2015 in selected markets. The UK, Denmark and Germany are seen as nations of early adopters, so are the top contenders to get the car first.

Hyundai is currently testing its fuel-cell technology in the iX35 SUV in Belgium, Denmark, Korea and the US. The ix35 FCEV is Hyundai's third-generation fuel-cell vehicle and is powered by a 134bhp electric motor that gets its charge from hydrogen fuel cells

The ix35 has been only slightly modified for the new powertrain. The most marked difference is a smaller boot to accommodate the hydrogen tank. There's also a new button on the dash: the VESS (virtual engine sound system) safety feature adds artificial sound and vibration to the otherwise silent motor, to help alert pedestrians to the car's presence.

The car, which is around 300kg heavier than a conventional ix35 because of the weighty fuel-cell stack, has similar performance to the 2.0-litre diesel version. Top speed is just 99mph, but it manages a respectable 0-60mph time of 14.1 seconds. The automatic transmission is smooth, too, and although it feels heavier, the ix35 FCEV handles as well as its conventional counterparts.

Fuel-cell electric vehicles have significant benefits over battery-powered cars, not least because of their range capabilities. The ix35 can travel up to 326 miles on one 5.6kg tank of hydrogen - more than three times that of a pure electric car. It takes just five minutes to fill up using a high-pressure pump and, according to Hyundai, the target cost for a full tank in Europe is about 22.

However, the technology is still in development and therefore expensive. It costs over 200,000 to produce a fuel-cell system at the moment. By 2015, Hyundai said this could be slashed to around 20,000, thanks to materials development and economies of scale. That cost doesnt include the vehicle itself, so the final production car could start at around 40,000.

However, it's all currently academic, given that the hydrogen refuelling infrastructure is virtually non-existent. The UK has only one filling station and the Government has yet to announce its intentions regarding the technology.

Deal of the day: Hyundai ix35