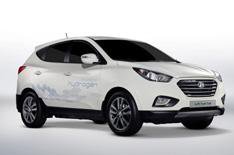 Hyundai will start production of its first hydrogen-powered model the ix35 Fuel Cell by the end of the year.

It aims to build 1000 examples by 2015, all of which will be leased 'publically and privately'; Hyundai has already signed leasing contracts in Sweden and Denmark. The firm says it has a target of 10,000 units after 2015.

The new model, which gets a minor face-lift, uses a fuel stack to convert hydrogen into electricity. This is stored in a battery pack and is used to drive the wheels.

Hyundai hasn't revealed how much the car is going to cost to lease, but it is unlikely to appear in the UK because of a lack of hydrogen infrastructure.

Deal of the day: Hyundai ix35