Infiniti Q50 vs Audi A3 Saloon

Executive saloons such as the Audi A3 Saloon and Infiniti Q50 are popular company cars, so tax levels, list price and equipment are key, as is refinement and ride quality... 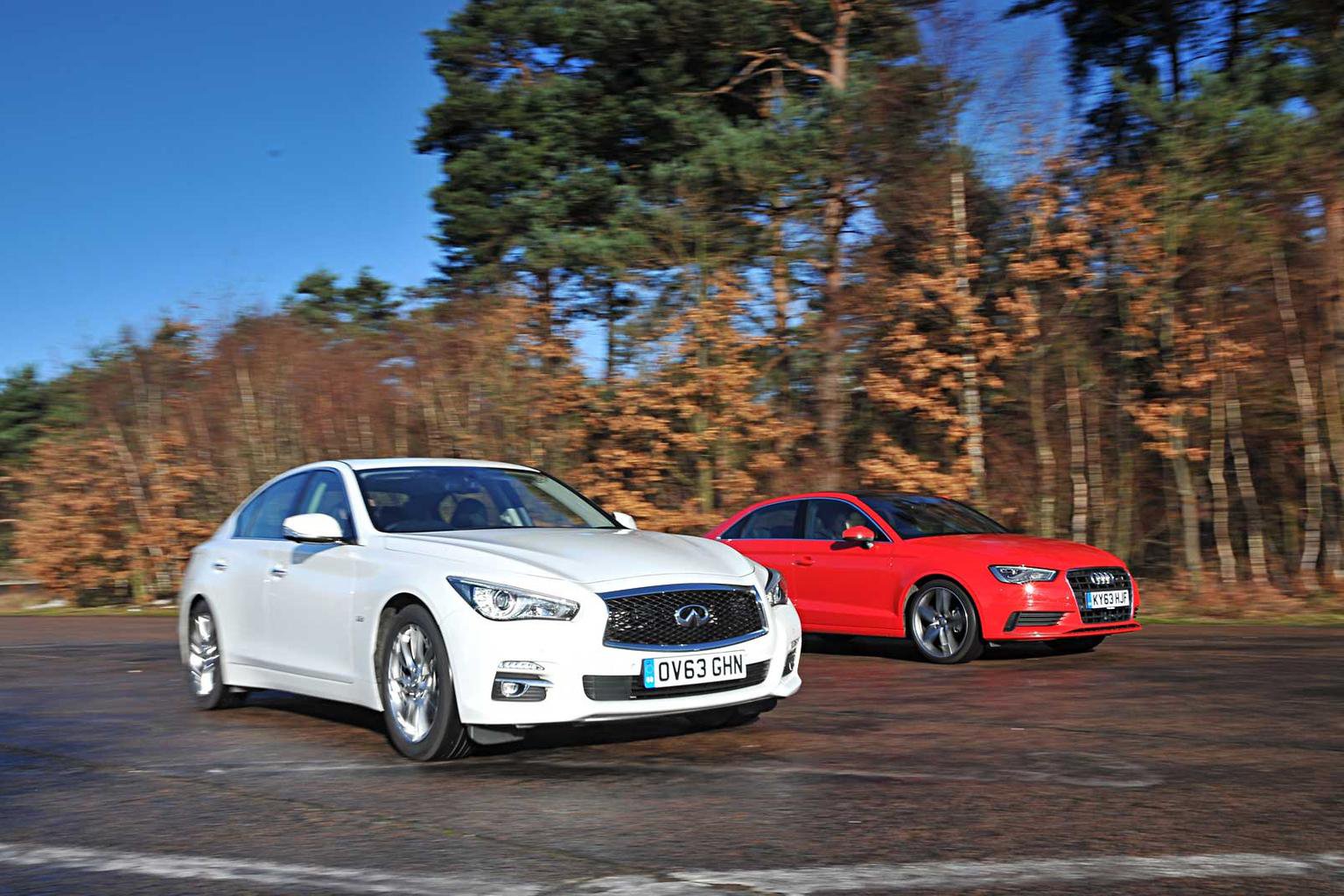 The Infiniti Q50 has its work cut out. It might be bigger than the Audi A3 Saloon, but both cars fill the same executive saloon role and the A3 is good enough to have unseated the BMW 3 Series as our pick of this class.

By comparison, the Infiniti is more expensive and less efficient. Does it makes up for these shortcomings?

You’d be forgiven for assuming that the rear-wheel-drive Q50 would deliver more entertaining handling than the front-wheel-drive A3. It’s not the case. The Audi turns into corners more sharply and grips better.

Part of the Q50’s problem is that it is heavier, and its steering is slower and requires more effort. There’s also more body lean in corners. It all makes the whole car feel quite ponderous on twisty roads, despite the active dampers and adjustable steering.

The Q50 sticks to the road well most of the time, but barrel into a corner and where the A3 will just grip, the Q50’s rear end slides a bit before the stability control restores order.

At least the Infiniti’s ride quality is good. The dampers adjust automatically according to conditions, helping the Q50 feel settled over most surfaces.

The A3 is firmer if you have the standard Sports suspension, but the comfort set-up (a no-cost option) strikes a superb balance between comfort and control.

The Q50 is the more powerful of our protagonists, with a 168bhp 2.1-litre diesel engine. However, the gearchanges from the optional seven-speed automatic gearbox are lethargic, and it can hunt around for the right gear at times. Together with the engine’s torpid response at low revs, the Q50 falls short of the more seamless power delivery in the 148bhp A3.

Sadly, it doesn’t get better for the Q50 when you consider refinement, because it’s blighted by a gravelly diesel soundtrack that resonates around the cabin at most speeds. To make matters worse there’s an awful lot of vibration in stop-start traffic.

By contrast, the A3 is smooth and hushed, although there’s some road noise at high speeds.

Dual colour touch-screens dominate the Q50’s cabin. What’s more, it offers an impressive level of online connectivity, including free apps for email and Facebook – assuming they’re supported by your phone. You can also fully control your MP3 player through the car’s system via USB or Bluetooth.

The high-resolution lower screen displays key icons, including the phone and dynamic settings, but while the glossy finish looks great, it also shows up fingerprints, reflects daylight easily and can be slow to respond. It’s a complicated system to use, particularly on the move, although the standard voice control is effective.

You have to spend a whopping £1920 to get sat-nav on the Q50 (which functions on the top screen), while DAB radio is available only as part of a £2760 pack that also includes nav and a 14-speaker Bose sound system. That’s hard to swallow.

The A3’s cabin is simpler but no less sophisticated. A colour screen rises from the dash and
is controlled via the MMI rotary dial. Together with the minimalist climate control switches and classy materials, it makes for one of the best interiors in the class.

As with the Q50, climate control, Bluetooth and full iPod connectivity are standard, but the A3 offers a greater range of driver’s seat adjustment; some will wish that the Infiniti’s seat went lower.

True, the A3 lacks the Q50’s online functionality, parking sensors and auto lights and wipers as standard, but sat-nav is more affordable at £495, while a DAB radio is fitted as standard.

The Q50 offers more rear legroom and is wider than the A3, but both will seat four six-foot adults comfortably.

The Infiniti also has the bigger boot, at 500 litres to the A3’s 425. However, the Q50's boot is an inverted T-shape, so doesn’t swallow bulky items well.

Both cars have five-star Euro NCAP ratings, although the Audi gets more safety kit.

If anything, private buyers have even less incentive to go for the Q50; even after discounts, it’s more than £4000 extra to buy. The difference increases to around £8k when you factor in the three-year ownership costs, including the Q50’s poor resale potential, high servicing costs and higher fuel consumption.

The Q50 is a bigger car than the A3, hence its slightly roomier cabin. Unfortunately it’s inferior in every other area. The A3 is better to drive, more refined, very nearly as practical and much cheaper to run as a company or private buy.

The Infiniti may well attract drivers who simply want to stand out from the crowd of Audis and BMWs, but they’d be making a big mistake in a class that’s defined by hard numbers and unforgiving standards.

Against Most execs are bigger; road noise

Verdict At the price, it’s the ultimate executive saloon

For Reasonable performance and practicality

Verdict Not good enough on any front