More for you |
New issue of What Car? magazine on sale nowPromoted | 5 reasons why it makes sense to go electric todayBig savings on our Car of the Year Awards winnersWhat Car? Awards 2021: The best cars you can buy2021 Nissan Qashqai: electric and hybrid power revealed
Home
News
Jaguar: Looking to the future
news

Jaguar: Looking to the future 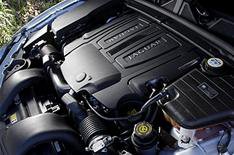 Jaguar is hinting that it can solve the CO2 challenges it faces without recourse to expensive and weighty hybrids or alternative fuel vehicles.

Managing director Mike O'Driscoll is unfazed by the tough new regulations, however. 'We will be able to meet the EU targets through the technology we are already working on and the powertrains we have already developed,' he said.

New engines
Visitors to the Geneva show can see the second phase of those new powertrains the 3.0-litre V6 diesels for the XF, which follow on from the 5.0-litre V8s Jaguar unwrapped at Detroit in January.

O'Driscoll refused to be drawn on what new engine and transmission developments might be in the pipeline, but said we could 'draw our own conclusions' when asked if smaller engines might find their way into the XF. 'You just have to look at our competitors and the engines they offer,' he added.

He also confirmed that the new V8s are modular engines, which would allow smaller-capacity V6s 'developing around 300 horsepower' to be created from the same architecture to replace the current V6 in the XF.

The XJ replacement
Jaguar's next major new introduction will be the replacement XJ, which you are likely to be able to read about in July. O'Driscoll and design director Ian Callum can barely contain their excitement for it while trying to give away as little as possible.

'We want people to be wowed and to give the car a great coming-out party,' said O'Driscoll, who confirmed that its first public showing will be at the Frankfurt show in September.

Callum said the car would 'complete the first chapter' of his vision to change the company from one using its heritage as a crutch to one that is forward-looking and modern.

He promised the new XJ would be 'exotic' and that the interior would 'create a bit more of a feeling of indulgence' than the XF to suit the different buyers likely to be attracted to it.