More for you |
Used Ford Fiesta long-term test reviewWhat can I do about a security issue on my car? Best cars for less than £250 per monthWhy is my new car’s fuel economy so poor?Top 10 used electric cars
Home
News
Jaguar to shut Midlands factory
news 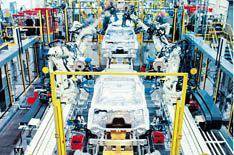 Jaguar Land Rover has announced plans to close one of its West Midlands factories as part of a strategy to cut costs.

No compulsory job losses
The company has said that it plans to shut either its Castle Bromwich or Solihull factory by 2015. An announcement about which plant will close is expected by next summer.

No compulsory redundancies are planned.

800 new jobs created on Merseyside
Jaguar Land Rover has also announced that 800 new jobs will be created at its Halewood factory on Merseyside, where the new LRX concept car-based Range Rover is to be built.

The company's chief executive officer, David Smith, said: 'This is a plan that recognises the impact that the economic collapse has had on our business, and at the same time the opportunities that lie ahead for our two great brands.'

Aggressive cuts over the past year have included a drop in production of more than 100,000 cars, 2500 jobs cuts and a pay freeze. However, a swing from profit in 2007 to a loss in 2008 has revealed these measures were not strong enough to counter the downturn.

The company has also announced an 800 million investment in environmental innovation, supported in part by European Investment Bank funds.

Reaction to the closure
Unite national secretary for the automotive sector, Dave Osborne said: 'Earlier this year, this company and our union agreed a framework agreement intended to support JLR through this tough economic period. Our members said then that JLR could not be trusted to uphold that agreement. Today this has proven to be true.

'While Unite welcomes moves to 'green' the JLR product range, Unite is deeply concerned that an agreement struck with the union barely six months ago will not now be upheld and that the company is seeking to close the final salary pension scheme.

'In April our members agreed to changes to terms and conditions of their employment in order to give the company financial security, but like Oliver Twist they are coming back for more. It appears that the company is making our members pay for their failure to secure government funding.

'We recognise the difficult trading environment for JLR, which is why Unite and its members have done more to help JLR during this recession than we have with any other company. But while the company may say that the business cannot sustain further liabilities, the truth is by far the biggest liability is the company's leadership team.

'Some of the problems the company faces today exist as a result of past management failures. These failures were at the hands of the same team who today want our members to lose their pensions. Well, Unite's members will not be paying for management's incompetence and we will not stand by while those responsible continue to wreck havoc on this business.'

Business Secretary Lord Mandelson said: 'Today's announcement of Jaguar Land Rover's business plan shows how focused it is on the future of the industry and the opportunities available as we move to a low carbon future.

'I welcome the commitment that Tata is showing in the highly-skilled workforce employed by JLR in the West Midlands and Merseyside as well as the top-class models it produces.

'Confirmation that the LRX is to be built at Halewood will help to end the uncertainty at the plant with the added prospect of some new jobs in the pipeline. Its a testament to the workforce who have made the plant one of the most productive in Europe. The Government has shown its support for this project with investment of 27 million announced earlier this year.

'JLR's new plan also outlines its continued support for the development of ultra low carbon technologies and product design to position the models more competitively in the global market place. The government will continue to do everything it can to help businesses fully exploit the opportunities that green manufacturing has to offer.

'I know that trading conditions are difficult for the car industry as a whole. It is inevitable that we will see further re-structuring across the industry. There is global over-capacity and car manufacturers recognise that they have to take some of this capacity out and cut back on their costs. There are opportunities and thats why we must continue to innovate and lead the way. I welcome the fact that JLR has already implemented a number of proposals to improve its long-term prospects.'