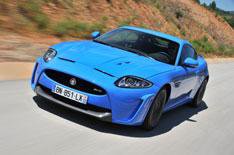 Is it worth the money?

Many will argue that a Jaguar badge doesn't have the same cachet as that of a Porsche. On top of that, the XKR-S's outlandish styling will probably win as many fans as detractors.

The bespoke nose has a deep carbonfibre splitter and a pair of cooling ducts either side of an black mesh grille: it's brash, and certainly imposing.

Mere figures can't really convey the ferocity of the mid-range grunt. With the gearbox in manual mode, you can put your foot down at low revs and enjoy the way the XKR-S builds speed with pretty extraordinary vigour.

It's also extraordinarily vocal. Run it hard up against the redline and the quad exhaust pipes belt out a roar loud enough to de-froth a cappuccino at 500 yards.

The chassis is more than capable of handling even this level of performance. Electronic sensors monitor wheel and body movements 100 times per second and automatically adjust the suspension to cope with varying road conditions. The steering system is lifted from the lower-powered XKR, while beefed-up front suspension struts give the S even more direct responses and sharper turn-in to corners. The electronically controlled limited-slip differential has been tweaked to boost traction, Finally, the electronic stability aids provide a comforting safety net when you're 'on it'.

The XKR-S definitely has the verve and composure to give Porsche engineers plenty of sleepless nights.

Can I use it everyday?

The S may be a true muscle car, but it also copes as an every-day hack. Leave the suspension and gearbox in comfort mode, stroke the throttle and you'll hum along with just the sizzle of fat rubber and the lick of wind noise whistling past the mirrors for company.

At this point you'll have the time to appreciate the interior of the XKR-S, which gets Jaguar's now-familiar pulsating starter button and rising rotary gear selector. There are also bespoke leather-trimmed sports seats with prominent shoulder supports and carbonfibre trimmings.

Against For many people the £18,000 cheaper XKR will be more than enough of a thrill.

Verdict The way the XKR-S marries supercar performance with everyday usability is remarkable; unfortunately, it also comes with a remarkable price