* More performance, but lower emissions * Arriving on the Jaguar XF first * Expected to be used in Land Rover line-up... 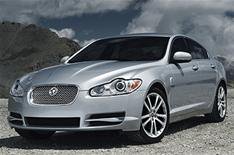 A 237bhp unit takes the place of the current 204bhp engine, but Jaguar is also adding a 272bhp 'S' version.

The XF, our 2008 Car of the Year, will be the first to get the new engines in March. They are also scheduled to go into the all-new XJ limo early next year.

Yet the 237bhp version delivers 16% more power and 15% stronger pull, while the S increases power by a third compared with the old engine and has 61% more torque.

Further plans for the engines have yet to be announced, but given the performance and economy benefits they bring, it's a certainty that Land Rovers will use them sooner rather than later.

Peugeot and Citroen currently share the 2.7-litre engine, but it is unlikely they will use the new 3.0-litre units, which have been developed in-house by JLR.

It is believed that the French companies have been working independently to improve the performance and economy of the existing V6.

A new twin-turbocharger system is crucial to the improvements JLR has been able to achieve. The main turbo does all the work in normal day-to-day running, while the secondary turbo cuts in only at higher revs.