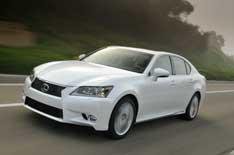 What is it? This is the fourth-generation Lexus GS the Japanese brands mid-size saloon. More than ever, its a direct rival for the BMW 5 Series, with a focus on sharper looks and extra driving appeal.

The GS450h petrol/electric hybrid model will be the big seller, but Lexus has introduced a new entry-level 2.5-litre V6 option, the GS250.

Whats it like to drive? Much like the BMW 5 Series, the way the GS drives depends on the version you choose. A number of different steering and suspension set-ups are available and each gives the car a slightly different character.

Entry-level GS250 models have standard suspension, while the GS450h has an adaptive damping system that allows you to choose between two suspension settings.

We drove GS250 F Sport and GS450h models in both standard and F Sport guise.

The standard GS450h rides comfortably (albeit on the mostly smooth Californian roads of our test route) and the handling is secure and grippy. There's a degree of slack in the body control and steering that make it feel its size on twisty roads, though.

The all-singing, all-dancing GS450h F Sport comes much closer to Lexuss claims of an engaging driving experience. The rear-wheel-steering system gives significantly crisper turn-in to corners and, overall, the car feels more lively and responsive. Grip is excellent and the car flows smoothly along twisty roads. The ride is stiffer in the firmest suspension setting, but its far from harsh.

The GS250 F Sports lighter weight gives it a usefully nimble feel, but it doesnt have the pace to make the most of it. The 2.5-litre V6 engine has just 207bhp, and a weedy 187lb ft of torque. The six-speed auto 'box works smoothly enough, but you have to work the engine hard to achieve decent pace, and it becomes boomy when you do.

The GS450h, which combines a 3.5 V6 petrol engine and electric motor for a combined output of 338bhp and 254lb ft, is usefully quicker, as a 0-62mph time of 5.9 rather than 8.6 seconds suggests. Again, though, getting the most from it isnt much fun the Continuously Variable Transmission (CVT) gearbox sends the revs soaring and the petrol engine sounds coarse when pushed. Admittedly, at low speed you can coast around in electric-only mode, creating little more than a whisper.

Wind and road noise isn't an issue on either model, but first impressions are that theres less of each in a BMW 5 Series.

Whats it like inside? The new GSs cabin has a more modern look than the current car, but its not as appealing as an Audi A6s or BMW 5 Series. The huge information screen at the top of the dash (the largest in any production car, Lexus says) is easy to read, but the Remote Touch Interface system with computer mouse-style controller is fiddly.

Build quality is excellent, and Lexus impeccable reliability record and consistently high scores in customer satisfaction surveys suggests that the GSs cabin will outlast most owners. Theres lots of plush leather, comfortable seats and electric adjustment for just about everything, too, but some of the plastics and switchgear would look more at home in a Toyota.

Interior space has improved, but the GS isnt as roomy as its German rivals. Rear legroom is plentiful, but foot space is rather limited and headroom front and rear is tight for anyone more than 6ft tall. The boot is also larger, but remains rather short.

Should I buy one?The GS isnt a bad car, but it's hard to recommend. Lexus has yet to announce prices, but the GS250 will start at around 36,000 and the cheapest GS450h will cost around 46,000. To get the best driving experience you'll need to go for an F Sport model, which will push the price closer to 50,000. That's its biggest problem; standard equipment will be lavish, but the Audi A6 and BMW 5 Series are better cars and both start at just over 30,000.

The GS450h averages 47.9mpg and emits 137g/km of CO2, which puts it roughly on a par with a six-cylinder 530d with optional automatic gearbox, and three company car tax bands lower. The 520d, however, accounts for around 80% of 5 Series sales and thatll cost substantially less to buy and run, even when loaded with optional extras. The GS250 averages just 31.7mpg and has CO2 emissions of 207g/km; 12.4mpg less and 58g/km more than a BMW 520i automatic.

Lexus says there are no plans for a diesel model and admits that, as a result, the GS has limited appeal. We'd have to agree.