More for you |
What Car? Real Range: which electric car can go farthest in the real world?2020 Hyundai i20 small car revealed: price, specs and release dateRanked: The most reliable executive cars - and the leastFord Focus ST long-term test reviewCar recalls: what are they and what to do if your car is recalled
Home
News
Maybach Landaulet
news 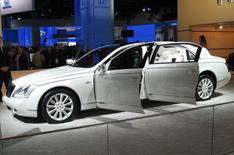 You may think it looks ridiculous, but not everyone agrees after being shown at last November's Dubai International Motor Show as a concept car, the Landaulet is going into production.

It remains in concept car form in Detroit, but few expect its extremes to be toned down that much by its conversion to the, ahem, real world.

Based on the Maybach 62 S and 57 S, the Landaulet is powered by a 607bhp twin-turbocharged V8 and features air suspension, stability control, anti-lock brakes and several other handling systems to ensure nobody spills their G&T.

The car is painted white, with white upholstery, white wheels and with the Maybach name embroidered on the white rear section of the collapsible roof you guessed it, in white.

Why so much white? 'The Maybach Landaulet Study does not wish to achieve its effect with superficial stylistic features, but rather the distinguished air of a first-class butler.'

Just in case the chauffeur has forgotten his station in life, though, it's worth noting that the roof on the front section of the car does not fold down, remaining a hard top, and, just to hammer the point home, the interior in the driving compartment is coloured entirely in black.

What does it cost? We did ask, and we were told that there are too many customisation options to pin an individual price on the car.

Which probably means that if you have to ask, you can't afford it.