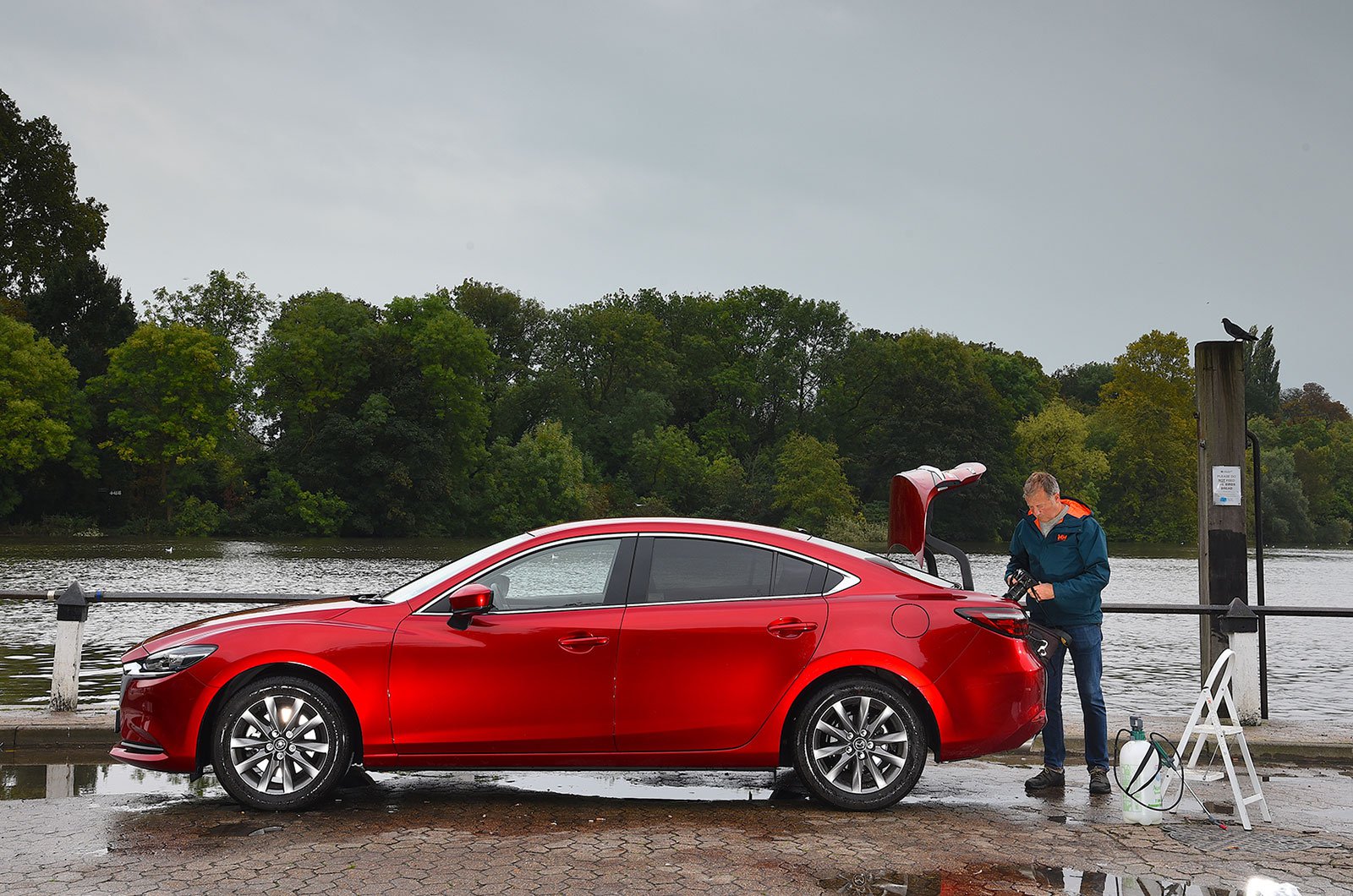 As I said when I first selected my Mazda 6 back in July, I’ve been oscillating between SUVs and estates for the past couple of years. Not that I’m complaining; plenty of practical space and driving prowess make them a great accompaniment to my job as What Car?'s chief photographer and to my daily life. But I was intrigued by the sleek looks of the 6, especially when paired with the attractive Soul Red Crystal paint here, and I’m pleased I decided to opt for a saloon over an estate for a change of scene.

The Mazda is a very pleasant car to drive; on the many long trips I’ve had to do to head to What Car? photoshoots and the like – often at awful times of the morning – it’s always proved comfortable, with a gentle ride that never left me feeling irritated. The 2.2-litre diesel engine has plenty of poke, making it easy to take on motorway miles and cruise through town alike, plus it’s expertly refined and means I’ve had no problem sitting back and enjoying listening to my audiobooks on the built-in CD player, as you might have read in an earlier report.

It’s also been a long while since I’ve driven a car with a manual gearbox, but my road test colleagues reassured me that Mazda’s gearshift is a pleasant one. I completely agree; there’s a short throw to the lever, and it slots nicely into gear, with the same sort of precision as the MX-5 sports car's.

I thought I’d miss the high-set, chair-like driving position of an SUV when moving to a saloon, but the Mazda 6’s seat isn’t too low, meaning it didn’t feel like I was stretched out too much. This meant I didn’t feel too achy at the end of a long drive and didn’t put too much of a strain on my hips.

Now to some niggles. The infotainment system is a little bit basic, with graphics that aren’t as sharp as you’d find in larger, more premium systems in its German saloon rivals. At least Mazda has done well to defy the trend by offering a touchscreen that only works when stationary – thus not proving distracting to operate when on the move – with a physical rotary controller that lets you move through the menus with ease. 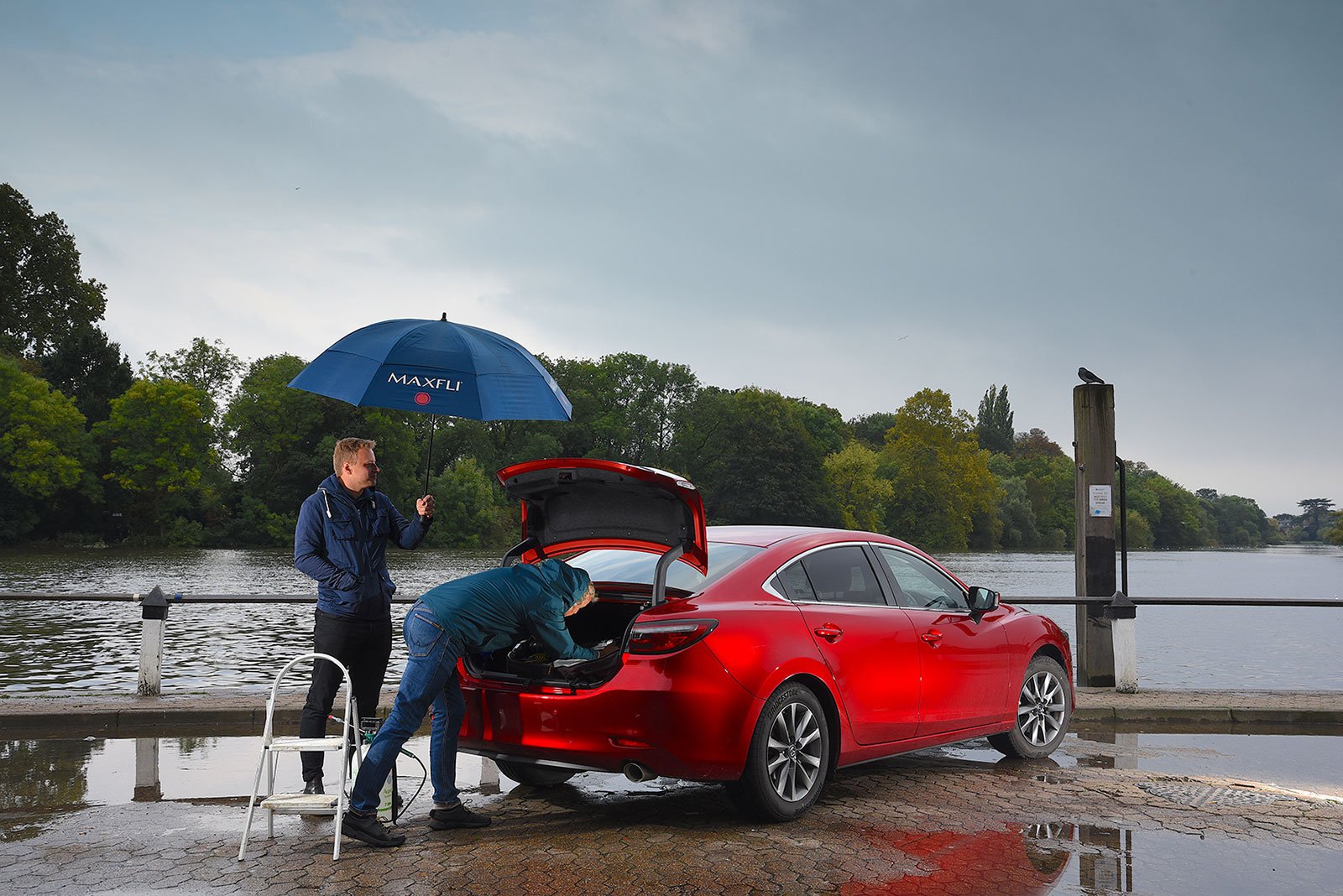 Carrying friends in the back seats hasn’t been too much of a struggle, although the middle seat is raised, cutting down on head room, while a large hump in the floor impacts on leg room, too.

Another small issue I found with the 6 was the lack of a rear window wiper. Although the window didn’t get as dirty as the more upright windows of an estate, it collected rain water easily and became a hindrance during the recent random bout of downpours.

But although I’m pleased I branched out and tested a saloon, I wouldn't readily choose one again. Although there's plenty of floor space in the 6’s boot, regularly stowing all my bulky photography equipment has proved a bit of a faff, due to the small boot opening and short saloon roof. Bending down and rummaging at the back of the boot has caused a bit of a backache on occasion.

Another one of my niche – but regularly occurring – uses for my car is lying in the back to photograph cars on the move. In an estate, this is usually no problem: simply fold down the rear seats and hang on tight. But this wasn’t possible at all in the Mazda, again due to that sweeping roofline and lack of a hatchback tailgate.

But these issues are very specific to my needs, so if you’re happy to sit in the driver’s seat instead of the boot and carry a regular amount of shopping instead of a couple of tripods and numerous light stands, the Mazda 6 is a very smart and comfortable saloon. For me, though, I think I'll be returning to the estate or SUV fold for my next car.

Next: Read more on our long-term Mazda 6 >