More for you |
More than half of car owners have used coronavirus MOT extensionThe 10 fastest-depreciating cars 2020Best small cars for Motability usersPromoted | The Volkswagen California: turn a British holiday into an adventureMotability cars available for less than the weekly disability allowance
Home
News
Mercedes-Benz SL
news

* Most upbeat Detroit motor show in years * 10 Detroit cars that caught our eye * NSX undoubted star of the show... 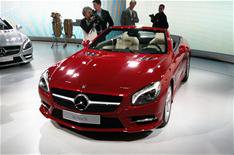 The Mercedes SL is the first of the company's two flagship models to get an update this year (we'll see a new S-Class sometime before 2013). It packs a load of the company's latest toys into one premium drop-top package.

The convertible keeps its folding metal roof, although one of the panels can now be glass and fitted with 'Magic Sky Control', which switches it from transparent to opaque at the touch of a button. The two petrol engines a 3.5-litre V6 and a 4.7-litre V8 are more powerful and up to 30% more efficient than their predecessors. There's stop-start technology, too.

The windscreen wash system is integrated into the wipers themselves a switch that prevents water spraying into the cabin when the roof is down. The shell that was on display on the stand revealed two enormous circular holes in the front footwells; they're used for Frontbass, an audio add-on designed to improve depth of sound during open-air motoring.

The technology is all tremendously impressive, then and it's even more encouraging that the latest SL gets an all-aluminium body that helps to slash its weight (SL originally stood for Sports Lightweight, after all).

However, the styling seems at odds with what's gone before. Every SL I've ever known has had flair and delicate grace; with this generation's oversized nose and grille, the jury is out on whether it has any of these qualities at all.