More for you |
Used Ford Fiesta long-term test reviewWhat can I do about a security issue on my car? Best cars for less than £250 per monthWhy is my new car’s fuel economy so poor?Top 10 used electric cars
Home
News
Mitsubishi Concept-RA
news 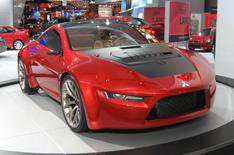 Mitsubishi's Concept-RA shows how the next-generation Eclipse coupe could look, and, although it is a long shot, company insiders refuse to rule out the new generation of the car being sold in the UK.

The Eclipse has previously only been sold in the USA, but its new 150bhp turbocharged 2.2-litre diesel engine meets emission regulations in the US and Europe. It has 199bhp, 310lb ft of pulling power and averages more than 40mpg.

The two-door, two-seat RA concept car coupe sits on 21-inch wheels and is built around a lightweight aluminium spaceframe, with bonnet, bumpers and other panels made from crash-resistant plastic.

It uses the advanced four-wheel drive system from the Evo X, which increases stability and grip.