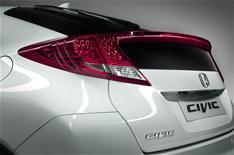 Honda has released the first undisguised image of its all-new Civic.

The image shows the rear of the car. As with the current Civic, there's a two-part screen. It's divided by a distinctive tail light that appears to stretch across the width of the car; Honda says it also works as an aerodynamic spoiler that 'manages air flow' over the top and sides of the car.

Honda has stated that making the new Civic as aerodynamic as possible was a key factor in its design, to both reduce drag and improve high-speed stability.

The image also shows a rear windscreen wiper something that isn't fitted to the current car.

Honda has released three videos to promote the new Civic, focusing on ride and handling, efficiency and refinement. The car will make its public debut at the Frankfurt motor show, and will go on sale in early 2012.