The all-new A6 has more space inside, new technology and improved efficiency.

Our 2017 Car of the Year is the luxury car to beat. The consummate all-rounder.

Has a great image and, even with four-wheel drive, is cheaper than the front-wheel-drive A6.

You know when you’re about to watch a big title fight and there’s that thick tension in the room? Well, there’s a similar frisson and fervour about this test, only it’s no bout with a spangly belt as its prize. No, this is war waged between three heavyweights: the Teutonic trinity of Audi, BMW and Mercedes-Benz. So, what are their stats?

Well, Audi’s A6 is the newest contender. Its looks, while tauter and more chiselled than its predecessor’s, are evolutionary, and they wrap a package that claims to provide more room for passengers and their luggage. In 2.0-litre four-cylinder diesel spec (incongruously badged 40 TDI), it lacks the innovative 48V mild hybrid technology of the pricier V6-engined iterations but still promises tax-cutting efficiency. It has lots of other contemporary kit, though, including a new dual-touchscreen dashboard layout and the availability of a semi-autonomous driving system.

It will need all of that and more to beat the BMW 5 Series, our 2017 Car of the Year and the consummate all-rounder: as good to drive as it is roomy and packed with all the latest toys. The 520d is our favourite version, thanks to its highly efficient 2.0-litre diesel engine, which affords it a fine blend of competitive running costs and real-world pace.

Last but by no means least is Mercedes’ E-Class. While the clout of its three-pointed emblem might have you thinking it’s the most expensive, the reality is that this E220d (again, a 2.0-litre diesel) with 4Matic four-wheel drive costs less than the front-wheel-drive A6. It’s the oldest of the three, having been on sale in this current guise since 2016, but at this price point it was the pioneer of all the technical wizardry the A6 and 5 Series now come with, so its rivals have been playing catch-up. 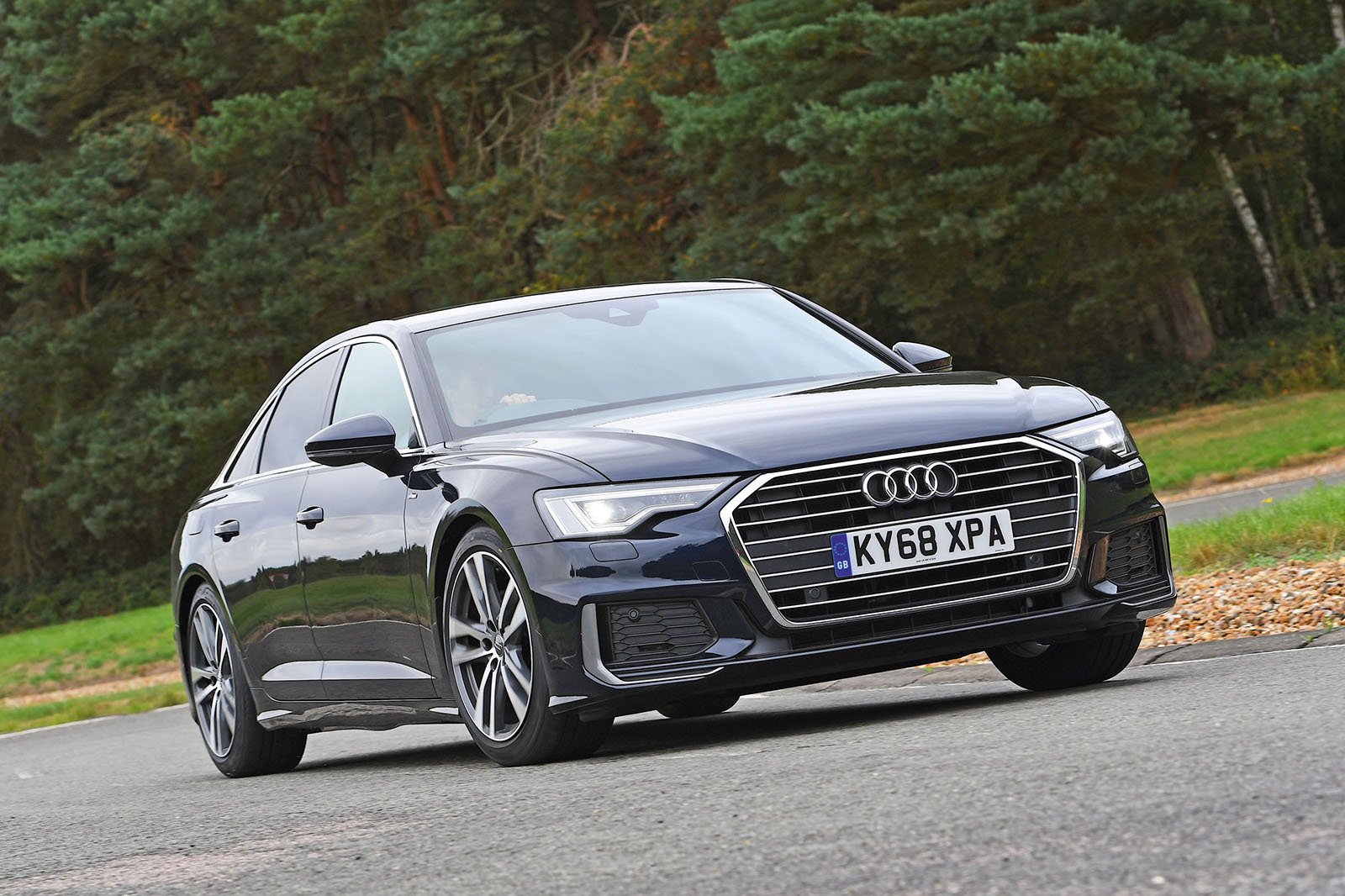 Despite all three cars being tested in sporty, top-spec trim levels, they’re still luxury cars at heart, so a fine ride is imperative. Each comes with suspension featuring conventional steel springs, which in the A6 S line and 5 Series M Sport have been stiffened over their cheaper alternatives. BMW lets you swap back to the softer set-up for no extra cost (Audi doesn’t), or you can pay £985 to have adaptive dampers fitted.

You can also pay (£1150) for adaptive dampers on the A6, but in this test it’s the only one not running an upgraded set-up, because our E-Class is kitted out with adaptive air suspension. This is pricey, at £3295, although it comes as part of a package that also includes higher-grade nappa leather inside.

As such, the A6 is the firmest, and by a margin. It stays supple enough over larger obstructions, such as sleeping policemen, but thumps over sharper-edged potholes and suffers some jitters on uneven stretches of motorway. The main issue, though, is the way it controls its body movements after a bump; it springs back up like a jack-in-a-box, pitching you back and forth in your seat. It’s irksome rather than downright uncomfortable, but we’re hopeful that the adaptive set-up is calmer; we’re yet to try it in the UK.

The E-Class on its standard suspension is definitely better, and, bearing in mind the cost of the upgrade, we’d suggest sticking with it. That said, the E-Class is sumptuous on air springs as it floats along, like you’re splayed supine on a giant waterbed. It’s easily the smoothest at higher speeds and – interestingly, considering its overall softness – exercises the best vertical control over large troughs and crowns in the road. However, two issues mark it down: some side-to-side sway that might prove problematic if your children are prone to travel sickness and the occasional shudder over razor-edged road scars. 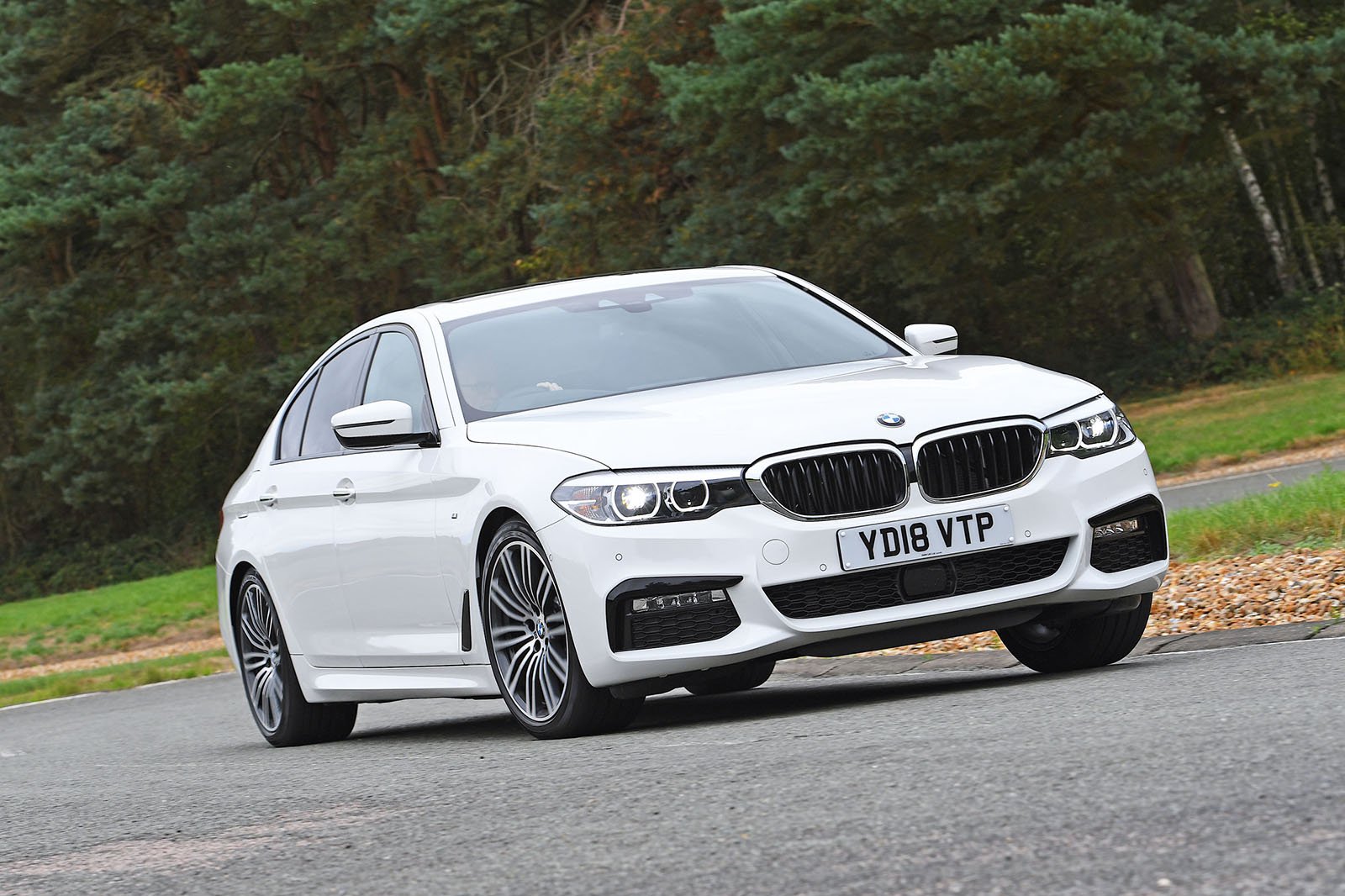 The 5 Series is too firm when on its standard M Sport suspension, making this adaptive set-up a no-brainer. It delivers the best blend of control and compliance in this test, being soft over speed bumps, the least prone to crashing over potholes, relatively calm on rippled motorways and utterly composed down lumpy country roads.

The 5 Series cossets in other respects, too. It’s the quietest at speed, with little in the way of road and wind noise, while its ultra-slick eight-speed automatic gearbox soothes you off the line and blurs one gear into the next. Only the engine makes its presence felt, being the grumbliest of the three, although it’s still far from coarse in comparison with most other diesel units.

We also rate the E-Class’s nine-speed automatic gearbox. It serves up gears like a dab-handed waiter switches courses and is equally slick in stop-start traffic. Meanwhile, the E-Class’s engine, while almost as audible as the 5 Series’, has a tone that’s easier on the ear. It’s just a pity t hat wind and road noise are more intrusive than in the other cars, with the former not helped by our test car’s optional panoramic glass roof.

The A6 is a mixed bag. Its engine is the quietest, no question; even when it’s pushed, you’ll struggle to find a four-cylinder diesel that’s less ‘dieselly’. And in terms of road and wind noise, it’s pretty close to the 5 Series. But suspension noise is the worst, especially over patchy town roads, and its auto ’box is our least favourite; while it pings through its gears efficiently much of the time, it’s the jerkiest and most reluctant at lower speeds.

You can see the frustrations of the A6’s gearbox playing out in its 0-30mph time. At 3.2sec, it’s more than 0.5sec slower than the other two, yet without the initial tardiness off the start it would have creamed its rivals to 60mph. You see, once the A6’s engine is unshackled from the gearbox’s inadequacies and allowed to fl ex its muscles, it’s the punchiest. For proof, you need only look at the A6’s 30-70mph pace, where it has the competition licked.

From a standing start in the dry, the 5 Series doesn’t really have any traction issues, but the E-Class’s four-wheel drive nevertheless launches it slightly quicker. Yet their relative pace is only ever separated by microns, no matter by which yardstick it’s measured, and, despite lacking the absolute flexibility of the A6, they provide strong real-world pace.

Along with its engine’s extra urge, the A6 offers tidy handling. It leans the least, grips hardest, feels the lightest and is keenest to tuck into a corner or switch direction. Its variable-ratio steering, which responds more slowly around the straight-ahead than it does at its extremes, is progressive and well weighted at speed yet usefully quick in a tight car park. 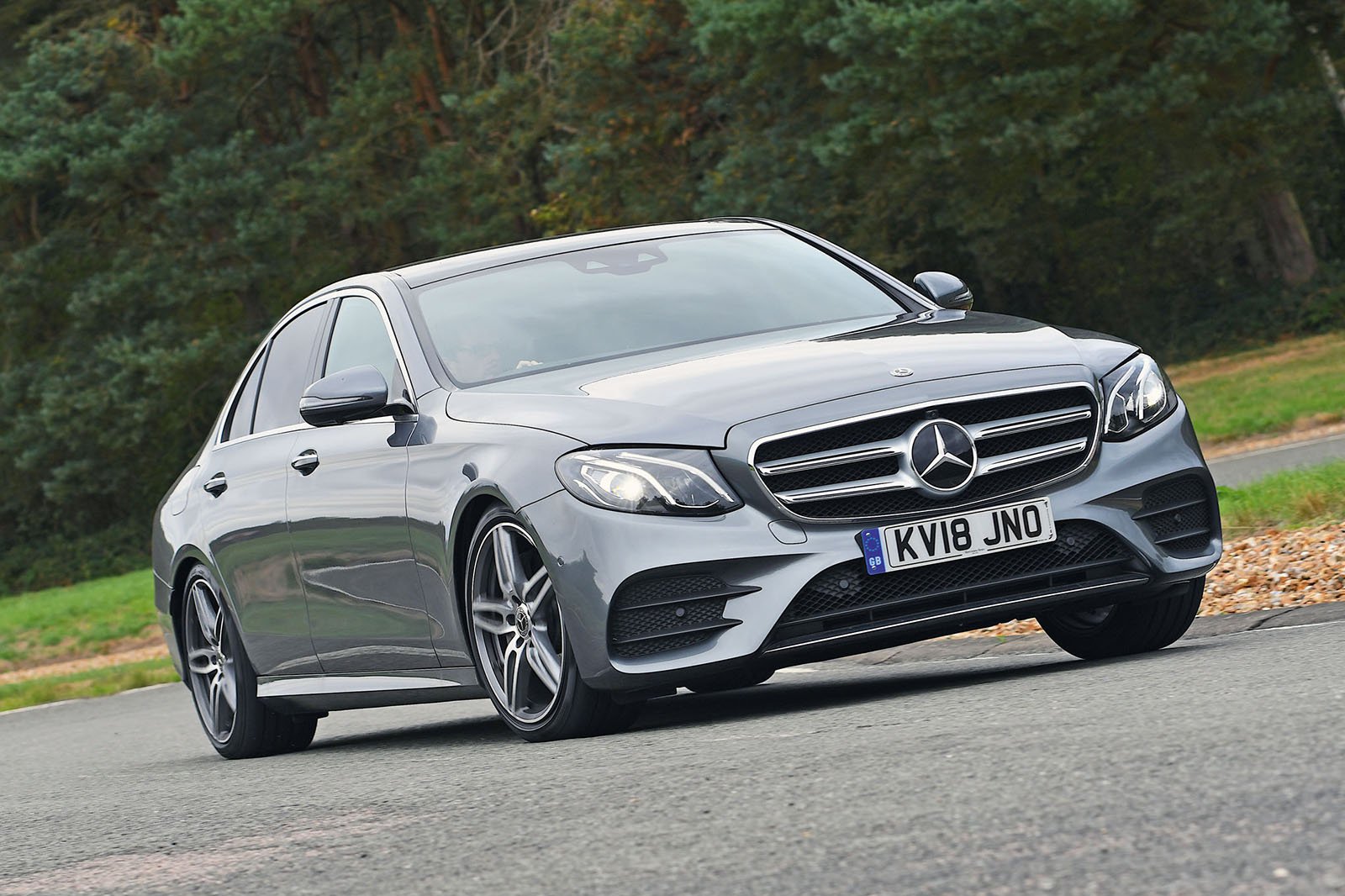 The E-Class also has variable-ratio steering. As with the A6, that’s a boon for parking, but the progression from slow to fast is more abrupt, making it the trickiest to steer smoothly through tighter turns and roundabouts. With four-wheel drive, the E-Class is utterly surefooted out of corners, even in the wet, but it’s the least incisive and pleasing to press on in, with the most body lean.

We’ve never suggested the current 5 Series is the Ultimate Driving Machine; in this class, that honour falls to the Jaguar XF. The 5 Series’ steering is its weakest link, because, while accurate enough, it’s the slowest of the three, and the vaguest when you push it, not providing crucial information about the grip the front tyres have. That said, if you drive it at, say, eight-tenths, exploiting its sublime rear-wheel drive balance rather than leaning so heavily on its front tyres, there’s much to savour when pedalling the 5 Series down a wide, snaking A-road.

Used Audi A6 vs BMW 5 Series