The new BMW iX3 electric SUV treads a less radical path than its proven Jaguar I-Pace rival, but is it the way to go?...

BMW’s first all-electric SUV takes the attributes of the excellent X3 and adds an impressive 285-mile official range, making it a compelling prospect

On paper, the I-Pace has the measure of its new rival for range and, with 395bhp from its twin electric motors, it will be hard to beat for straight-line performance

As important as it is to protect the planet, doing so can seem a little inconvenient. Whether it’s remembering to grab a handful of bags before heading to the shops, paying a bit more for responsibly sourced goods, or finding that eco-friendly cleaning products just aren’t as effective as the bad stuff, wouldn’t it be nice if the right choice was also the easy one?

Well, after big advancements in battery and charging technology over the past decade or so, we’d argue that swapping a gas-guzzling premium-badged SUV for an electric one is becoming something of a no-brainer for many. After all, electricity is far cheaper than petrol or diesel, electric company car tax rates are jolly attractive and, at this price, you certainly won’t be stuck with a car that drives like a milk float.

While there are plenty of choices out there, the Jaguar I-Pace has long held its head up high among newer rivals from Audi and Mercedes. Its unusual looks mask a surprisingly practical SUV with enough power to startle sports car drivers should you wish. Here, we’re lining it up in entry-level S trim against something of a latecomer to the class. 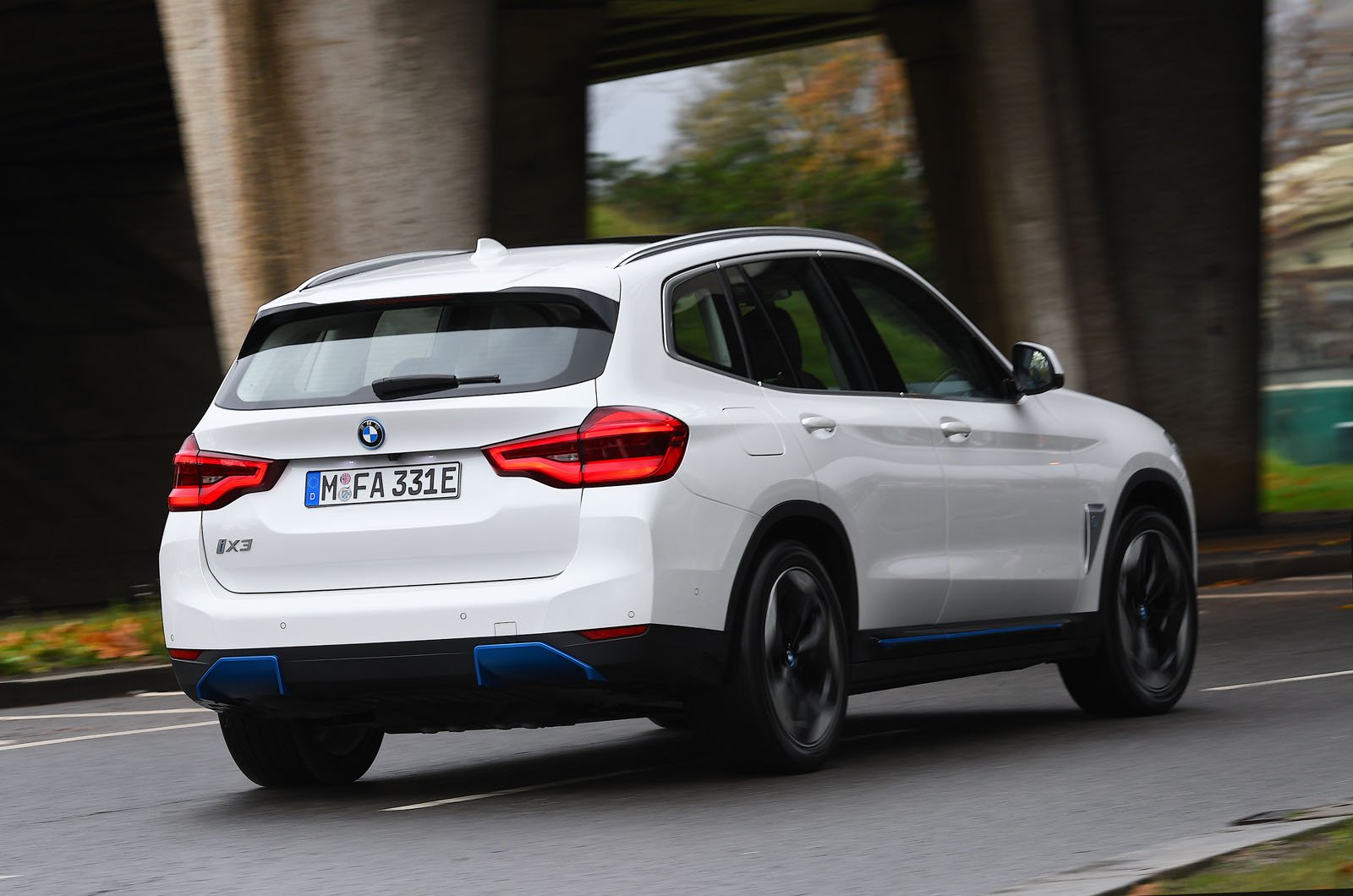 Yes, casually sauntering to its desk well after the register has been called is the BMW iX3. Like its name suggests, the new kid is an all-electric version of the regular X3. But while its silhouette is certainly familiar, up close you’ll notice plenty of subtle styling tweaks to optimise efficiency, plus a few blue highlights to hammer home the ‘I’ve gone electric’ message. Time to find out which is the class swot and who’s staying behind after lessons.

If you’re stepping from a conventionally powered large or luxury SUV, you’ll probably be more than satisfied with the iX3’s performance. Its single electric motor develops 282bhp, and despite that being deployed to the rear wheels alone, traction was good on our damp test day and it turned in a 0-60mph time of 6.2sec. Performance does start to tail off a bit above 50mph, but the iX3 gets up to motorway speeds and zips past slower-moving traffic quickly enough for most.

On the other hand, those acquainted with the slap-in-the-back urgency of a Tesla might find the iX3 to be a little lacking in drama, and that can’t be said of the I-Pace. Its two electric motors give it 395bhp and four-wheel drive, and with plenty of traction it managed a 4.3sec run from 0-60mph, even if the steering wheel writhes in your hands a little if you accelerate hard from a standstill like this. 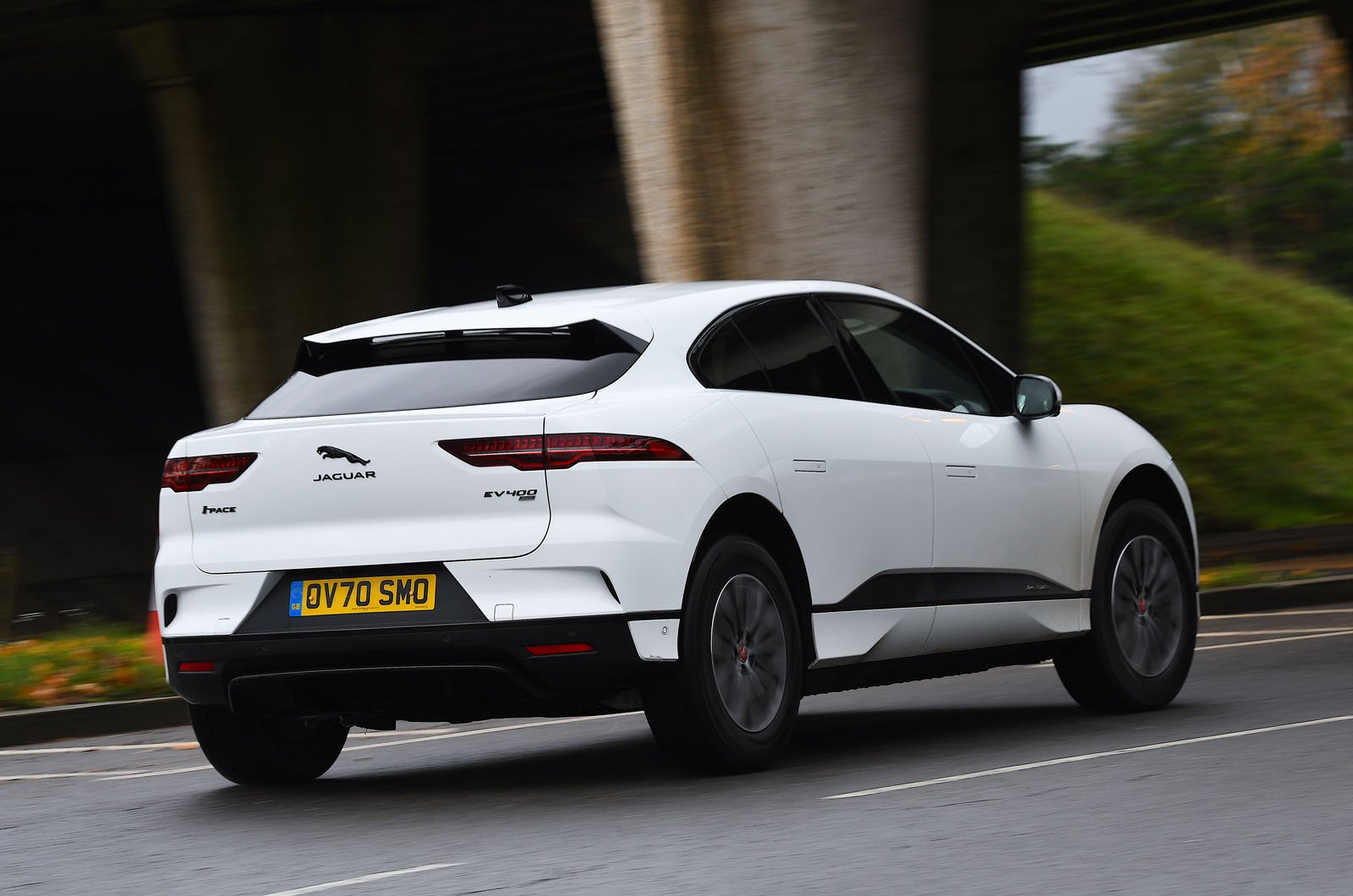 More to the point for real-world driving is that the I-Pace is a substantial 1.9sec quicker from 30-70mph; that’s handy for dispatching tractors on country roads or making the most of an unusually short slip road.

Of course, acceleration is only part of the story when it comes to electric performance; there’s also the small matter of range. With a bigger battery than the iX3, the I-Pace is officially capable of 292 miles on a charge, seven miles more than its rival. However, outside laboratory conditions, you’re unlikely to get close to achieving those figures.

What’s more, batteries will always give their best performance on warm days, and while a petrol or diesel car can draw heat from its engine, the only thing keeping you warm in an EV is electricity. As those with electric domestic heating will testify, such warmth uses a lot of juice, and this helps to explain both cars’ disappointing energy consumption during our tests, which took place on a cold day. 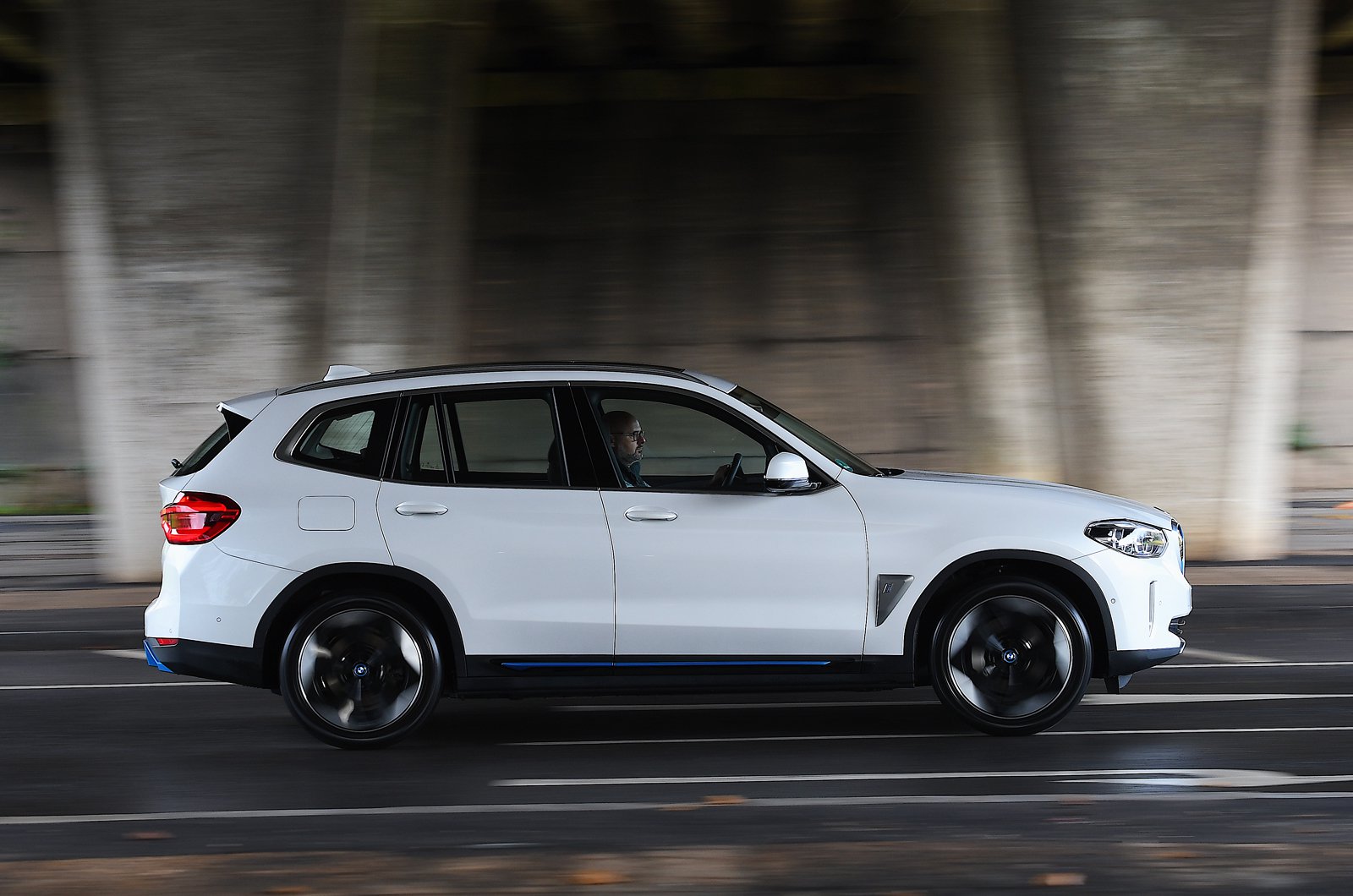 Based on the battery size of our two cars and the energy consumed per mile on a mix of roads, the I-Pace would manage around 211 miles and the iX3 192. To put those figures into context, in warmer conditions, the I-Pace managed 253 miles in our scientific Real Range test. We’d expect a similar uplift for the iX3 in the same weather.

We’ll cover charging times a bit later, so let’s instead focus on comfort right now. Here, the I-Pace’s non-adjustable suspension impresses in its ability to smooth off most humps, holes and haggard surfaces, be they in town or on faster roads, and this makes it a fantastic motorway cruiser. However, particularly undulating country roads do reveal slightly loose body control.

By contrast, even with its standard adaptive suspension in the softest setting, you’re more aware of surface imperfections passing beneath you in the iX3, and potholes deliver more of a thump. Yet it’s by no means a boneshaker, plus its stiffer springs mean there’s less float and wallow, so passengers with sensitive stomachs are less likely to feel queasy than they are in the I-Pace. 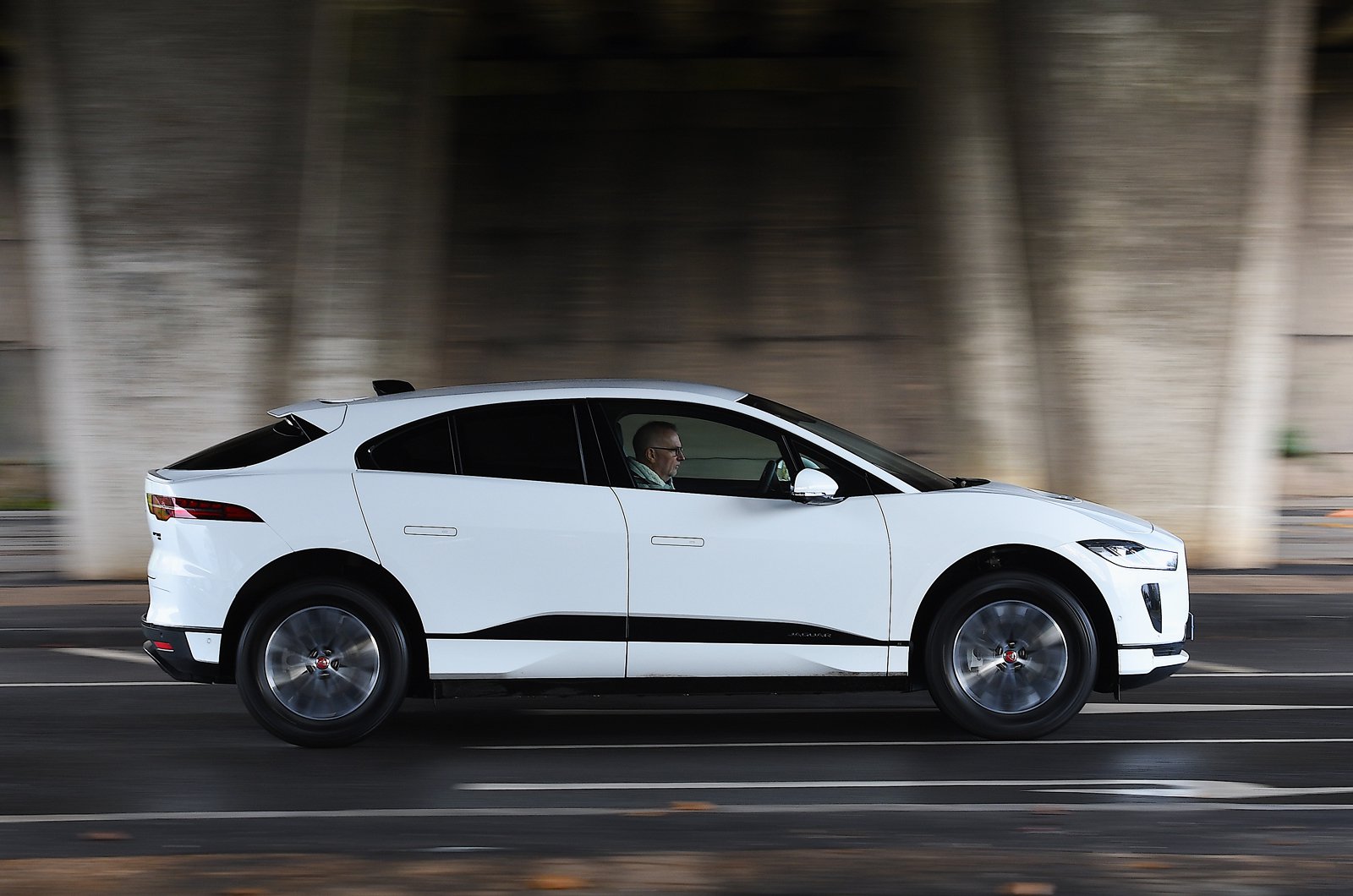 Both cars have quiet electric motors, and you can switch on some additional sci-fi sound effects if you like that sort of thing. The iX3 has a bit more suspension noise than the I-Pace at low speeds. However, while the decibel meter shows that the latter is the quieter of the two cars at 70mph, the wind and road noise it generates is more irritating than what you’ll experience in the iX3.

The iX3’s firmer set-up pays dividends in corners, especially with the suspension flicked over to Sport mode. It scythes through switchbacks with little body lean for such a tall car, and its precise steering makes attacking bends a pleasure. Those who really like to get involved will find that the iX3 will tighten its line satisfyingly on the exit of slower corners, without ever feeling lairy.

Not that the I-Pace is a blancmange to drive; its steering is just as pleasing and grip is decent, despite its body leaning more than the iX3’s. Pushed harder, though, it’s a bit scrappier and less predictable than the iX3; the abrupt way that its stability control system intervenes doesn’t help. Fortunately, neither car is a chore to manoeuvre at low speeds.