* Three new cars on the way from Jaguar * Baby XK coupe and roadster * Plus an estate version of the XF... 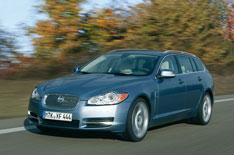 Jaguar is planning three new car launches in the next four years.

The company is preparing to launch an all-new two-seater, both as a roadster and coupe, and an XF estate.

All-new coupe and roadster
The two-seat roadster has been rumoured to be called the XE or C-Type and would be below the XK in Jaguars range. The coupe and roadster variants would be priced from around 45,000 to rival the Porsche Cayman and Boxster, and go on sale in late 2013 at the earliest.

XF range
The XF estate is the centre point of Jaguars ambitions to expand its XF model range. The estate will probably go on sale a year after the current saloon is face-lifted, which is due to take place in 2011. An all-new XF is scheduled for 2014 or 2015.

In addition, a long wheelbase XF is being prepared for sale in China, where chauffeur-driven cars are in vogue among business buyers. BMW and Mercedes-Benz have already made big strides in the rapidly expanding Chinese market by producing stretched versions of their cars.

An XF coupe would be another easy way to get an additional car out of an existing platform a tactic that Jaguar is keen to employ but there has been no confirmation of this model.

No decision on X-Type replacement
Reports of Jaguar building an X-Type replacement to rival of the BMW 3 Series are also said to be premature. While company officials say such a plan is under evaluation, it has been described as being among a raft of potential new car types that were constantly under review.