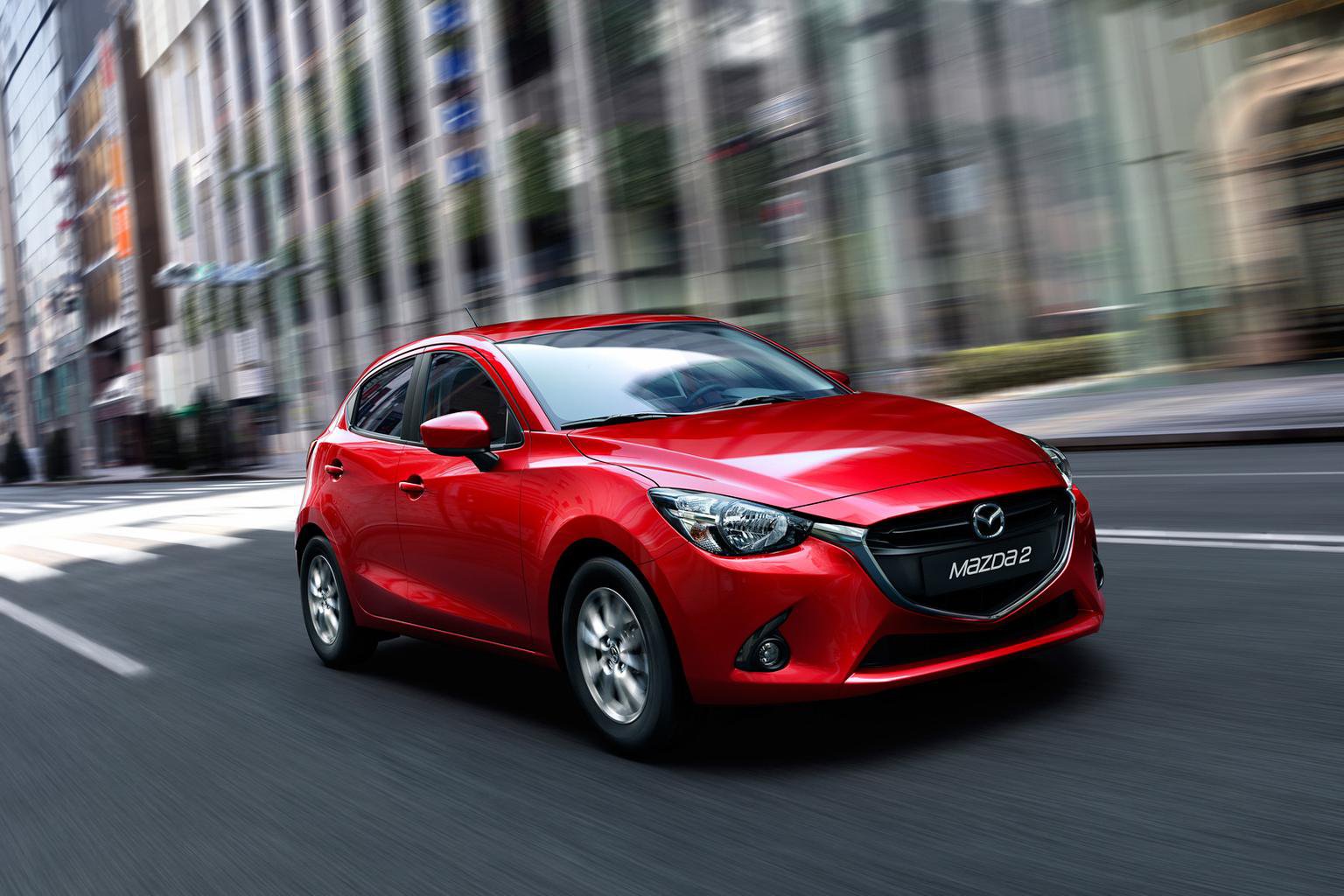 This is the new Mazda 2, which should prove a fuel-efficient rival for the Ford Fiesta and Vauxhall Corsa when it goes on sale at the end of 2014.

The 2 gets Mazda’s Skyactiv technologies, which are designed to match the fuel efficiency of small turbocharged engines or even hybrid systems without the complexity or expense. We’ve already seen the process delivering competitive CO2 emissions in the 3, 6 and CX-5.

The new 2 gets a new set of chassis components, but it’s broadly the same size as the car it replaces – only a little longer and wider. The 2 is slightly longer than its rivals – at 4.06m it is 9cm longer than both the VW Polo and the Ford Fiesta.

It gets Mazda’s distinctive deep grille at the front, and complex creases along the doors; they’re designed to disguise the fact that the car has quite shallow side windows. Overall, the 2 is one of the more dramatic-looking offerings in the small car class.

The front of the cabin takes cues from the latest 3, with a clean, uncluttered design that has very few buttons, simple circular air vents and a large screen mounted high up in the centre of the fascia. This is the same unit that you get in the 3, which means that it can be operated with either a touch-screen interface or via a rotary controller mounted low down between the front seats.

Mazda claims to have improved rear cabin space. However, from our experience with the early prototype, we’d say legroom is still likely to be an issue for anyone who’s more than six feet tall.

Boot space has increased for this generation, giving a capacity that’s comparable to a VW Polo’s. That would give it around 280 litres, which is more than enough for the average weekly shop. The boot itself is quite deep, though, so there’s a high lip to lift loads over.

Skyactiv generally means lighter construction and larger engines tuned to run more efficiently – and that’s exactly what the 2 will get. It will be offered with a choice of 1.5-litre, four-cylinder petrol or diesel motors – an unusually large size, given that many of its rivals are now offered with 1.0-litre three-cylinder units.

There will be four engines offered in the UK, with three petrols and one diesel.

The entry-level petrol engine is a 74bhp 1.5-litre, which offers CO2 emissions of 110g/km and fuel economy of 60.1mpg when paired with a five-speed manual gearbox.

Despite being the least powerful, it is not the most efficient of the petrol engines - that is the 89bhp 1.5-litre version, which emits 105g/km and has an average fuel economy of 62.8mpg if specced with the five-speed manual. This is also the only engine in the 2 that will be offered with an automatic gearbox, in this case a six-speed unit. Emissions are affected slightly, as it produces 112g/km CO2 and manages 58.9mpg.

The top-level petrol model is a 113bhp unit. This is the least efficient model in the Mazda 2 range for now, but even this manages 57.6mpg and emits 115g/km of CO2.

The 1.5 diesel, meanwhile, will be the most efficient model in the line-up with CO2 emissions of 89g/km and a government fuel economy average of 83.1mpg.

These economy figures put the Mazda 2 on a par with its rivals, but not at the top of its class. The Ford Fiesta Ecoboost, for example, emits 99g/km of CO2 and averages 65.7mpg, while the diesel Renault Clio emits 83g/km.

Mazda hasn’t issued UK specs for the 2, let alone any prices. It has confirmed that the 2 will come with new safety equipment, including blind-spot monitoring.

We’d expect the prices to start at the same figure as the current car’s, with entry-level editions from around £11,000. That would pitch the 2 slightly above the normally aspirated petrol editions of the Fiesta and Corsa, but cheaper than any of the turbocharged models offered by Ford and Vauxhall.

The current generation is available with discounts thanks to our Target Price. Those discounts are not the largest in the class, though, ranging from around £600 to £850. We'd expect similar levels of savings to become available on the new car, if not immediately.

Read our review of the Mazda 2 prototype