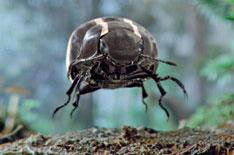 An outline of the next Volkswagen Beetle was revealed in an advert shown during American football's Super Bowl last night.

Interest in the adverts shown during the commercial breaks can be as big a news story as the game itself, so advertisers can pay up to $3million to air a 30-second ad during a Super Bowl break.

Volkswagen had two adverts aired during the Super Bowl, one for the US-market Passat featuring a mini-Darth Vader, and one for the new VW Beetle, which is due on sale in the UK towards the end of this year.

Deal of the Day: Volkswagen Beetle