More for you |
Promoted | 8 ways the Nissan LEAF e+ is changing the game for electric carsWhy I bought a Nissan Leaf: owner reviewWhat Car? Real Range: which electric car can go farthest in the real world?10 ways to bag a used car bargain in 2020Are electric cars more expensive to insure?
Home
News
Nissan Leaf to get iPhone remote control
news 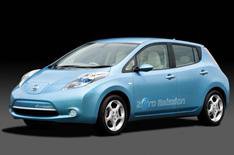 The Nissan Leaf will connect with mobile phones to allow the remote operation of in-car utilities and the transmission of battery and charging data.

The electric-powered Leaf will be compatible with the iPhone and other 'smart' phones that will be able to deliver information on charging locations, monitor the car's battery condition, programme charging times and remotely control the vehicle's air-conditioning system.

The data connection will help the driver assess the car's range and the location of charging stations while on the move. The phone connection will also allow the driver to program charging times while the car is connected to the mains at home (for example, to take advantage of lower-priced off-peak energy).

The driver can also use the phone connection to activate the Leaf's air-conditioning by remote control while the vehicle is on mains power. This means the cabin can be warmed or cooled before setting off leaving the batteries the less demanding task of maintaining the temperature.

Nissan 'Leaf' driven
We took Nissan's EV-11 effectively the development version of the Leaf for a test drive at the company's Advanced Technology Centre in Japan. On the short course we tried, it seemed well suited to both city and short-distance use.

Handling is predictable and secure thanks to the low centre of gravity, while the 100-mile range gives good practicality.

Battery packs will be leased
Owners of the Leaf will be able lease the car's slimline batteries for a period of around five years, after which the power pack will be replaced.

Nissan says that the old packs will be reusable for lower-drain applications such as telecommunications back-ups.

Future developments
Nissan's Advanced Technology Centre is also working on future developments of electric car technology, including contactless recharging, which would use induction technology to allow the car to be recharged simply by parking it in a designated space.