Promoted | Honda e: own the electric car of the future today

Stylishly compact, deceptively spacious, packed with friendly tech and fast to recharge – the Honda e rethinks the city car for the electric era. Here’s why it should be on your shortlist...

With a futuristic design language, a stylish high-tech interior, great zero-emissions electric range and fast recharging, the Honda e hasn’t just been designed to show the future of electric cars – it has been designed to shape it. And the great news is, you can drive it today.

The Honda e’s compact dimensions and powerful whisper-quiet electric motor make city driving even easier, more stress-free and more fun, while the chance to ditch the engine and rethink the interior of an electric car means there’s no compromise on space or practicality. If anything, it frees up the opportunity to reconsider what a car’s interior can be.

To find out more about the Honda e and how you can register your interest, visit honda.co.uk

Impressive electric power and low-slung responsive handling make the Honda e just as well-suited to winding down your favourite B-road as it is traversing an urban jungle, while a range of up to 137 miles (WLTP) and fast 0-80% charging in as little as 31 minutes make it eminently practical to use every day – and on longer journeys when needed.

In the same way that the iPhone rethought the smartphone to change how we communicate (and added a bit of desirable wow factor for good measure), the Honda e is as much a statement as it is a car. Rendering everything around it outdated, the Honda e says more about its owner than you might think. Environmentally conscious, tech-savvy and endlessly stylish – a Honda e driver is just as forward-thinking as the car itself. 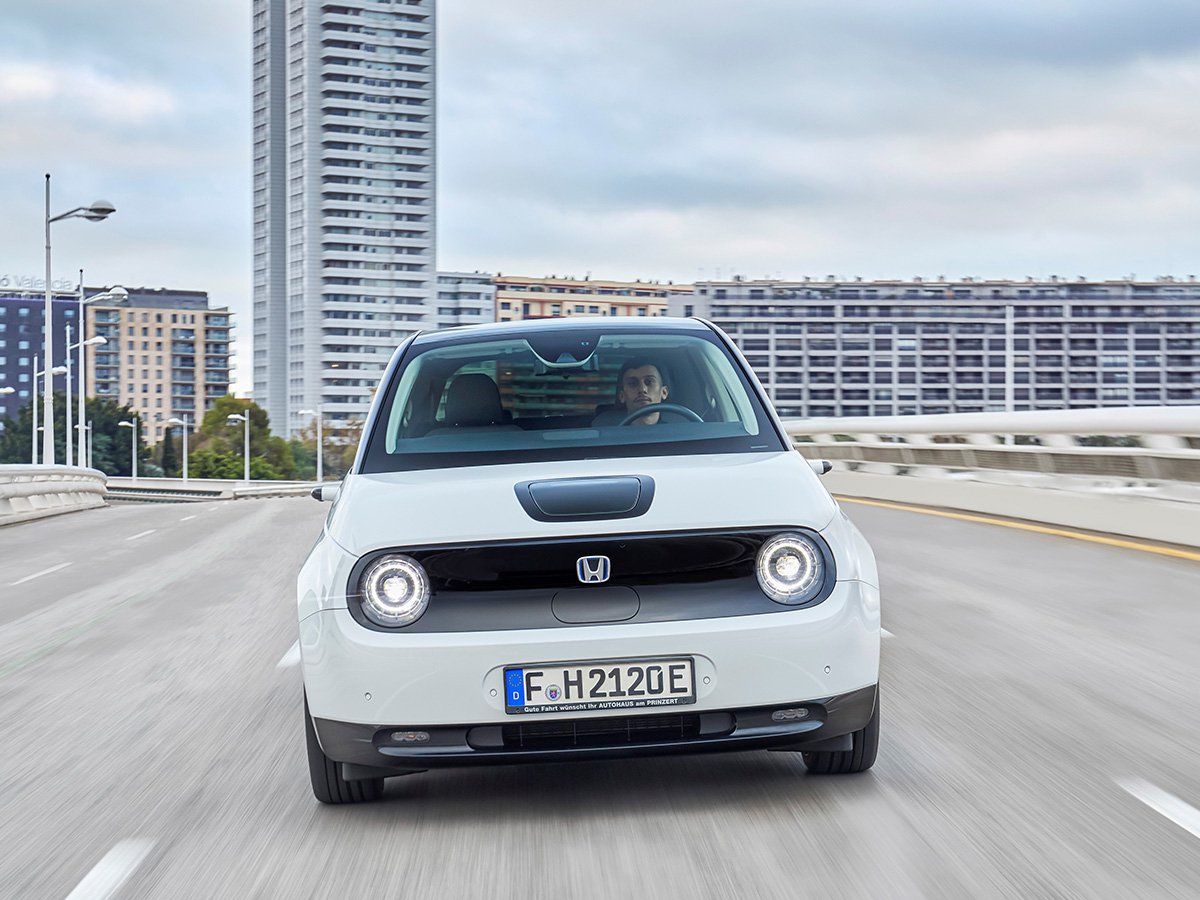 Minimalism in the age of complexity

As Honda’s first pure electric car, the Honda e is an all-new, clean-sheet, ground-up design. That meant Honda’s designers and engineers could sculpt the car – inside and out – in a way that combines style, practicality and electric performance.

Honda “questioned everything” about conventional car design. The headlights, front-facing radar and multi-view camera are assembled in a single panel – all part of Honda’s drive to create bold seamless minimalism in an age where cars are becoming progressively angular and fussy. Swooping lines and rounded edges give the Honda e a retro feel, but one that’s combined with futuristic modernism.

Speaking of retro: Honda claims you can’t look to the future without remembering your past, and that’s why the Honda e has styling cues reminiscent of the original Honda Civic – a car that, when launched, dominated the small hatchback market.

The Honda e is not only a timelessly sleek electric car, though. It has been shaped with practicality in mind. The wheels, for example, have been designed to stay free of brake dust, keeping the car cleaner for longer, while the ultra-compact wing mirrors – which are, in fact, wing cameras – have been sculpted for the optimum aerodynamic profile, helping the car cut through the air more cleanly and efficiently.

Compact dimensions (the Honda e is just 3.9m long) not only deliver head-turning looks, but also supreme city-friendly manoeuvrability. A turning circle of just 4.3 metres – tighter than a London taxi – ensures that navigating car parks and narrow streets is a breeze. 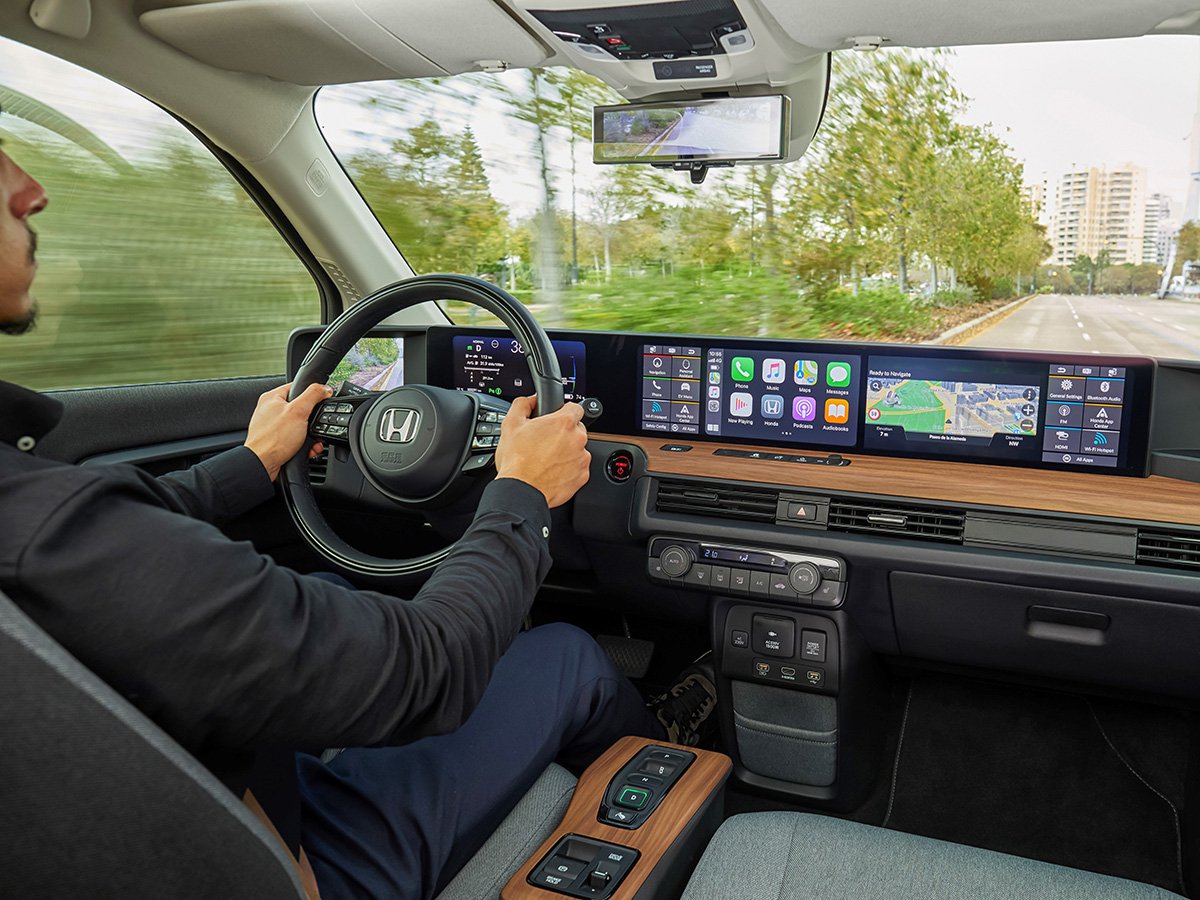 The Honda e is most certainly a car of the future, and it undeniably has the interior to match. Inside, it’s crafted more like a lounge than a car – roomy, stylish, classy and practical, while also being decidedly minimalistic in the face of car interiors that are increasingly complex and confusing. Honda calls it a “human-centred design philosophy”, putting you – the driver – at the heart of it all.

The Honda e’s dashboard – dominated by the two large, wide infotainment screens – is broad and uncluttered, while the satin-finish wood creates a homely atmosphere.

The lack of a centre console gives the driver and front passenger more space to move, while rear passengers can stretch out with an abundance of leg room (the Honda e has some of the roomiest rear seats of any car in this class). Large windows are the cherry on top – creating a light, airy feel. This is a car in which you’ll want to spend as much time as possible.

It’s not just the comfort and homely-feel that separate the Honda e from its rivals. The abundance of technology and a clever infotainment system means this car has the futuristic capabilities to match its looks. The driver’s 8.8in digital instrument cluster gives easy access to key information, while the 6in screens on either side of the cabin show the crisp and clear video feed from the wing mirrors.

At the centre of it all are two wide 12.3in infotainment screens. They’re fantastically easy to use, with the latest in smartphone connectivity and mirroring technology letting you ‘pass’ content between screens for the driver and front passenger. An HDMI port means that things like a Google Chromecast or a gaming console can be plugged in and viewed. And, if one chooses, a virtual aquarium can be played to serenely pass the time when parked.

It’s not just amazing interior technology that the Honda e sports – the car reacts to things around you as well. Honda Sense systems utilise the multitude of exterior cameras and high-tech sensors to constantly monitor cars around you – applying the brakes if there’s a hazard or danger ahead, and informing you when the way is clear again – while Honda Parking Pilot lets the car expertly park itself, even in the narrowest of spaces. 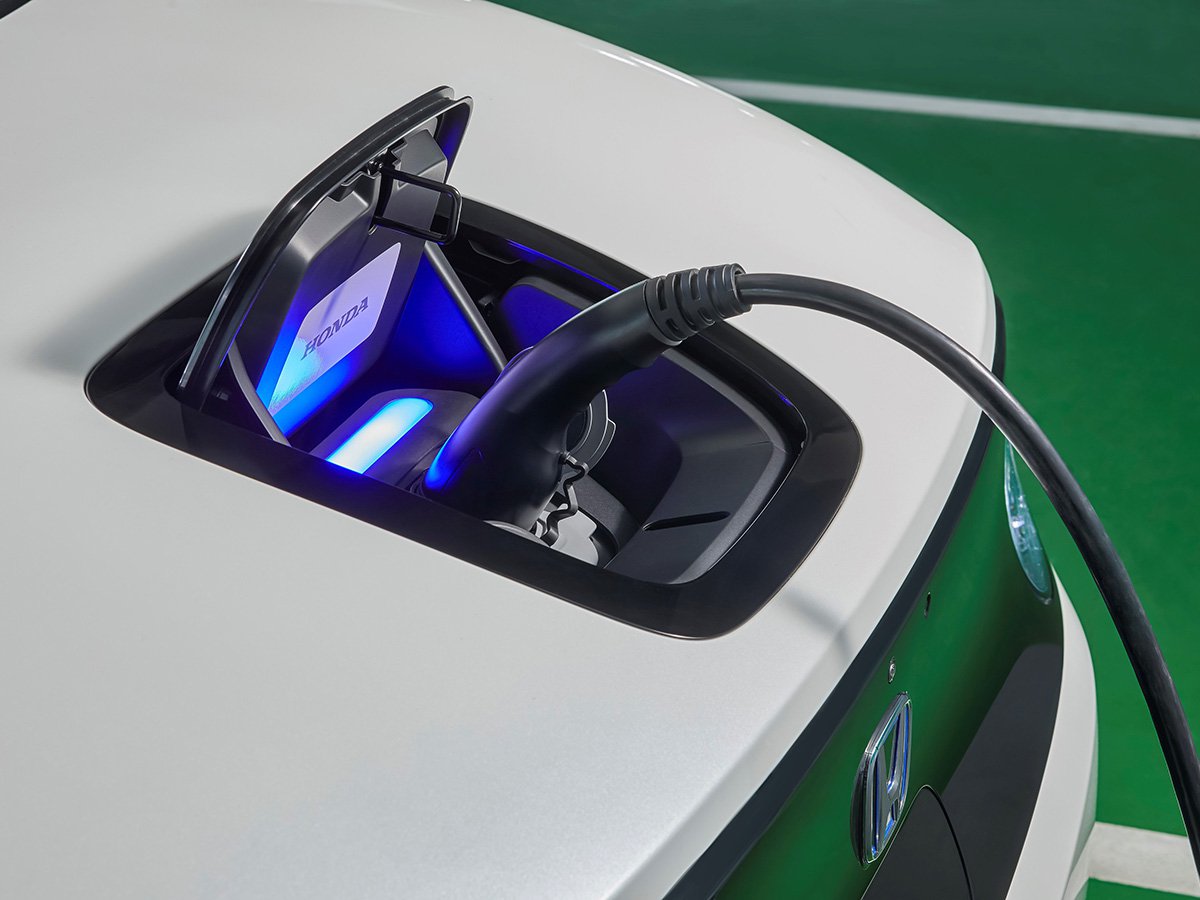 Power that goes the distance

Shaping the Honda e from scratch not only gave Honda’s design team the chance to craft a thing of physical beauty – it also allowed them to engineer a compact electric car that has the power, precision and driving ability you’d expect of a much more sporty car.

With its lithium-ion batteries mounted low in the chassis, the Honda e has an extremely low centre of gravity and perfect 50/50 weight distribution – making for exceptional road holding and precise, predictable handling characteristics. Crucially, the Honda e is also rear-wheel drive – just like the best sports cars – meaning the instant electric power pushes you through the corners with clinical accuracy and manoeuvrability. Fully independent suspension all-round combines driving confidence with sublime comfort.

The Honda e also has the power to match the handling. It uses one rear-mounted electric motor to save space and improve packaging – and it really does pack a punch. Available with 134bhp or 152bhp, and well over 200lb ft of torque, the Honda e zaps from 0-62mph in just 8.3 seconds, making it much quicker than similar petrol-powered small-car rivals. The instant acceleration provided by the electric motor also means that motorway driving is no hassle – the Honda e can easily keep up with fast-flowing traffic.

Thanks to its 35.5kWh lithium-ion battery, the Honda e has a range of up to 137 miles (WLTP). This makes it perfectly capable of handling multiple everyday journeys on one charge – whether it’s the average 30-mile daily commute, or a batch of quick 10-mile school runs and trips to local shops.

Clever regenerative braking and single-pedal driving means the Honda e can subtly recharge its batteries while on the move (making it as efficient as possible), while the ability to charge at low-cost at home – or to top-up your charge from 0% to 80% in as little as 31 minutes at a rapid public charger – you can go even further should you need it.

So, with standout design, a forward-thinking high-tech interior and the sort of performance, efficiency and fast recharging that make you wonder why we didn’t go electric sooner, the new Honda e really is the future of electric cars. Today.

To find out more about the Honda e, and how you can register your interest, visit honda.co.uk