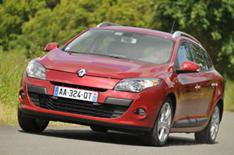 Like NASA, estate cars exist for space, but style was just as important to Renault when it was designing the new Mgane Sport Tourer. It features bespoke taillights that wrap around the side of the car, while the roofline drops away dramatically and the rear screen is steeply raked.

Fortunately, these good looks don't come at the expense of practicality at least up to a point. The Megane's wheelbase (the distance between the front and rear wheels) has been stretched by 62mm, and the body now extends farther behind the rear wheels. Result: the Sport Tourer has more rear legroom than the hatch, as well as a larger boot.

The numbers that count

You can fit 524 litres of luggage beneath its load cover, which is slightly more than you'll get in the rival Ford Focus and Volkswagen Golf estates. However, the Skoda Octavia (our favourite small family wagon) can swallow 560 litres.

Folding the Sport Tourer's rear seats is also trickier than it could be, because you have to flip up the bases before the backrests will lay flat. What's more, even once you've done this, there's a step in the extended load floor.

Buyers can choose from five petrol engines and four diesels at launch, with power outputs ranging from 85bhp to 178bhp. Two of the diesels (the 1.5s) emit less than 120g/km of CO2, so qualify for a lowly 13% company car tax rating, However, so far we've driven only the flagship 158bhp 2.0-litre diesel, which is gutsy and refined, but rather pricey.

Cheaper versions should make far more sense, although they still cost thousands more than comparable Octavias. The Mgane's plush cabin and good standard kit help to excuse this, but it's no more than average to drive.

Decent practicality and sharp looks, but not top of class