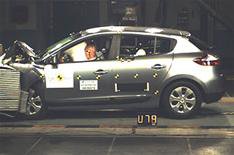 The new Renault Megane has achieved a maximum score in the latest Euro NCAP crash tests.

It was awarded a full five stars for adult protection and scored a maximum 37 points, becoming only the second car to do so after the Nissan Qashqai.

Cars that didn't achieve the maximum adult protection rating are:

The Sandero, which has had its UK on-sale date postponed indefinitely, was criticised for being sold with an optional safety pack that raised its adult protection score from three to four stars. Euro NCAP said the safety kit should be fitted as standard.

The Ford Ranger was criticised following other disappointing safety results for pick-ups, with Euro NCAP saying safety needed to be improved throughout the entire sector.

Euro NCAP is introducing a new test procedure in February, when it will award maximum five-star ratings only to cars fitted with stability control.