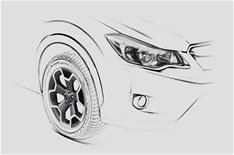 Subaru will reveal a production version of its Nissan Qashqai rivalling XV, at the Frankfurt motor show next month.

Unlike the Qashqai, the XV will be four-wheel-drive only. The engine line-up will include a 1.6-litre petrol and a 2.0-litre diesel, while a CVT gearbox will be available as an option.

The XV is due on sale early next year, but Subaru is yet to reveal prices for the car. However the company's British importer, IM Group, has the Nissan Qashqai firmly in its sights.

'We want to sell the XV for the same price as the Qashqai,' said a spokesman. 'We need to have a level playing field on price.

'If we are 2000 more expensive then it will be very difficult. If we are competitive on price and get customers into the car, then we're sure they will be convinced.'