It’s amazing to think that given Subaru’s penchant for four-wheel drive (even on the smallest cars in the range, such as the Justy), it would take them until 2012 to come up with a Nissan Qashqai rival. Trouble was, the XV was much more expensive when new, so it never matched the success of the Qashqai. Now that used prices have taken a tumble, it's time to re-evaluate this Subaru.

The fact that the XV comes as standard with four-wheel drive makes it stand out in the family SUV class and will appeal to those who live in areas that experience extremes of weather or live up a rutted farm track.

There was a choice of engines, though. The petrol range consists of an underpowered 112bhp 1.6 and a more potent 148bhp 2.0-litre unit. There is also a more economical 145bhp 2.0-litre diesel that's better for those covering plenty of miles, but it doesn’t provide much low-down torque – unusual for a diesel engine. Manual gearboxes of either five or six speeds are available, as is a CVT automatic.

Unfortunately, the XV doesn’t handle as neatly as more car-like rivals, with a notchy gearbox (in manual examples), inconsistently weighted steering and a lumpy ride marring its on-road abilities. However, the XV is more geared towards those who need a rugged vehicle, so they’ll appreciate the 220mm of ground clearance and permanent 50/50 split of engine power between the front and rear wheels more than its cornering abilities. In fact, the XV is incredibly good off the beaten path, with the only thing stopping it being its rather long nose, which will make contact with the dirt long before the car loses traction.

Inside, you’ll find plenty of space for occupants front and rear, as well as a number of cupholders and storage areas to put things. Boot space is a bit disappointing, while interior quality leaves a little to be desired too. Hard plastics abound, with some of the door panels flexing visibly when touched. Things were improved after a 2016 facelift, though, particularly when a revised 7.0in touchscreen was introduced that looked and worked far better than the aftermarket system fitted to higher-spec earlier models. 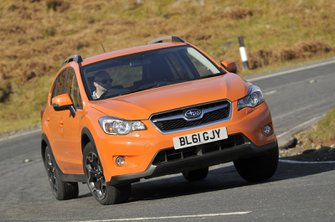