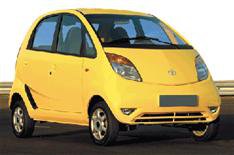 Launched at the Delhi motor show, the Nano will cost just 1277 when it goes on sale later this year.

It's shorter than a Mitsubishi i, has four doors and can seat five people, but there is no air-conditioning, power steering or electric windows.

Powered by a rear-mounted, two-cylinder 624cc engine developing 33bhp, the car is capable of 68mph and 57mpg.

However, environmental critics have said that the car will contribute to growing air pollution problems, partly because India's car sales are predicted to more than quadruple by 2016. Tata expects to sell a million Nanos each year once production is in full swing.

Not all environmentalists are so concerned, though. Andrew Davis, of the Environmental Transport Association, says there is much to learn from it.

'We're struggling to reduce our CO2 emissions, while even the smallest car is weighed down with features such as air-conditioning and electric windows. It appears we have lost sight of what an efficient and relatively benign mode of transport a car can be.'

The big news for British car buyers is that Tata could bring the Nano to the UK - but only after it has become established in India.