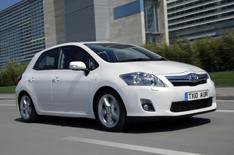 Production of the all-new Toyota Auris Hybrid will be launched today by business secretary Vince Cable at the car maker's Burnaston factory in Derbyshire.

First in Europe
Toyota's Burnaston factory will be the first in Europe to build hybrid vehicles, and Mr Cable will tour the facility before witnessing the inaugural Auris HSD roll off the production line.

Speaking ahead of his visit, Mr Cable said: 'Toyota's decision to make Burnaston the only factory in the world to build the Auris Hybrid is a strong endorsement of the UK as a manufacturing base for the next generation of cars.

'It is sending a signal to manufacturers that if you're not in the UK, then you're missing out on all the strengths and skills that the UK has to offer.'

The Auris HSD (the initials stand for Hybrid Synergy Drive), which does an average of 74.3mpg and emits just 89g/km of CO2, marks an important step in Toyota's plan to expand hybrid technology across its entire range by the early 2020s.

It uses the same technology as the latest Prius. That means a 1.8-litre petrol engine working with an electric motor, and an engine stop-start system to help cut emissions and improve fuel economy.

The Toyota Auris HSD goes on sale in July and will cost from 18,950.