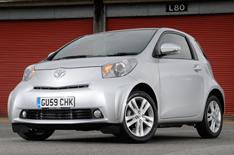 From the outside, the extra £2000 Toyota is asking for the range-topping iQ 3 over the entry-level model is a little cheeky.

The first difference you'll see will be the fancy chrome-trimmed mirrors, while eagle-eyed buyers may notice the slightly larger alloys. Don't worry, that's not all you'll get: the most important addition is the 1.33-litre petrol engine.

While the 1.0-litre engine is ideally suited to the iQ's urban pursuits, it struggles a bit on faster roads. This is where the 1.33-litre unit comes into play, because its extra power (97bhp over the 1.0-litre's 67bhp) means it gets up to speed more easily, and is happier to cruise at 70mph.

The engine gets a bit boomy when worked hard, but it's far from deafening.

The other thing that'll appeal to buyers will be the engine stop-start system: it switches off the engine without a fuss when the iQ stopped in traffic, and is similarly discreet when you press the clutch to start it up. You'll save a few pounds in petrol and it cuts CO2 emissions, too.

Okay, so both the emissions and fuel consumption are higher than with the 1.0-litre engine, and the interior trim is nothing special, but these pale into insignificance when you notice the price: £11,615 is a lot for a car that struggles to seat four and has just 32 litres of boot space.

It's hard to justify the car's high price