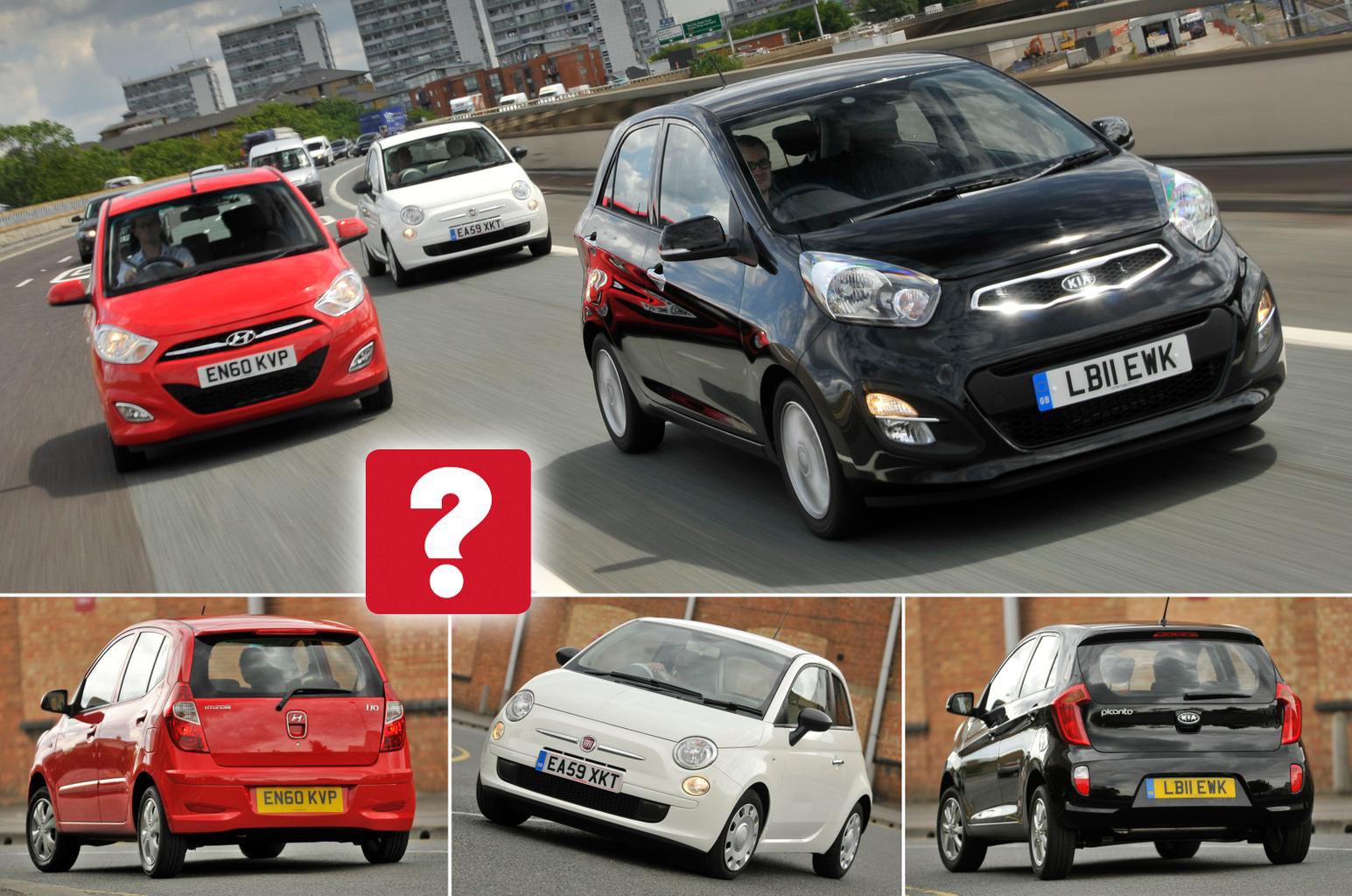 Cute as a button and enormously popular. Small cars don’t get any more fashionable.

Cheap to buy and even cheaper to run, the i10 is a cracking budget city car.

The outgoing Picanto has a grown-up feel, but is it worth the premium over an i10?

Few could have guessed, way back when it was launched in 2008, that the Fiat 500 would become quite as long-lived as it has. But that it is still on sale almost 10 years later is a testament to its enormous success; its picture-perfect looks have made it the doyenne not just of fashionistas in London, but of buyers looking for a city car with buckets of style right across the country.

But is style necessarily what you need in a small car? Hyundai i10 owners might disagree. It’s hardly going to be found ferrying models to catwalks at London Fashion Week – but what it does offer is enormous good sense. It’s cheap to buy, deceptively spacious, and even has a strong reputation for reliability. So while it might not appeal to the heart, it certainly does to the head.

Trying to find the middle ground between the two is the Kia Picanto. In this form, it’s arguably smarter-looking than the upright Hyundai, yet it purports to offer a more sensible blend of usability and practicality than the Fiat. The best of both worlds, then, or so it would seem – but will that really be the case? To find out, it’s time to put these three tempting tiddlers to the test.

Even used city cars now have to be capable of far more than a quick dash to the shops; that said, it’s most likely that these three will spend most of their lives in town.

Here, the Picanto’s diminutive dimensions and tight turning circle are a real advantage. Unfortunately, it also has grabby brakes and a clunky, short-travel clutch, so even the smoothest driver ends up looking like a learner in stop-start traffic.

The Picanto is pretty stable at speed and doesn’t totter around when confronted with a corner. However, there’s a shortage of grip and you often have no idea where the front wheels are pointing due to the numb steering that doesn’t self-centre. A knobbly ride completes the unhappy picture. 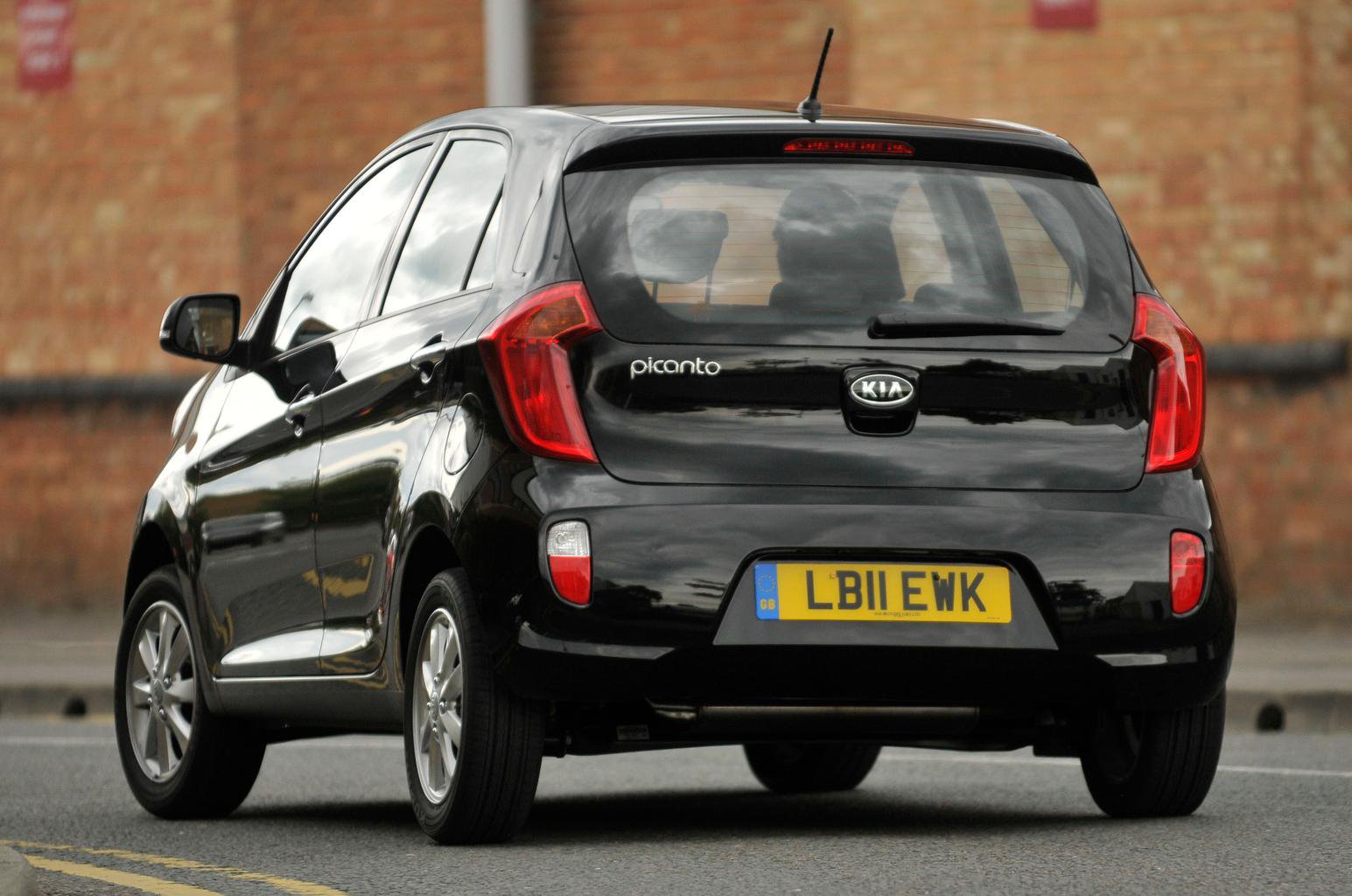 Swap to the i10 and things feel far more settled at town speeds. What’s more, its clutch and brakes are easier to modulate than the Picanto’s, and all of the controls are effortless.

The ride can get a bit bouncy on the motorway, plus the i10 starts to feel a little out of its depth on twisty roads due to limited grip and steering feel. Still, its steering is more consistent and reassuring than the Picanto’s, and its snappy gearshift is a delight.

The 500 also has its strengths. It feels planted on the motorway and grips much better than its rivals. It’s just a pity that the steering feels so light and detached. A button on the dashboard makes it even lighter, so parking is a doddle. Sadly, the ride fidgets and jiggles whatever your speed, and bigger bumps thump through the interior (not to mention the occupants). 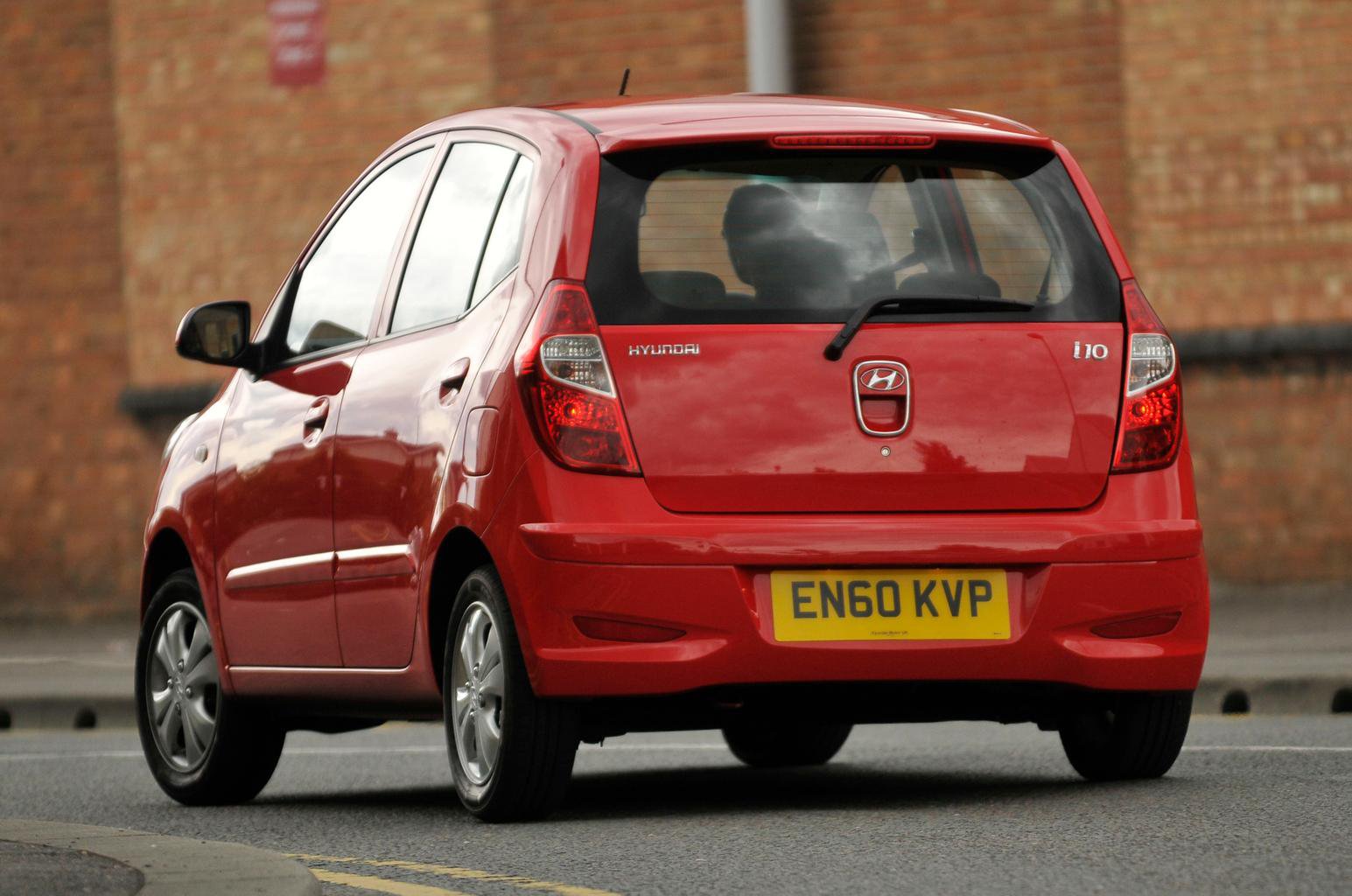 Performance is better: the 500 accelerates briskly, climbs steep hills with vigour, and maintains motorway speeds without you having to grind the accelerator pedal into the carpet.

The i10 is even more lively and flexible, which is hardly surprising when you look at the power and torque figures. By contrast, you need to thrash the Picanto mercilessly to pick up speed, and even then it feels painfully slow.

The fact that you have to work the Picanto so hard inevitably hurts refinement, and its engine also transmits a lot of vibration through the car when it’s idling. However, the engine settles right down at a steady cruise, leaving wind noise as the only problem.

In truth, none of these cars are particularly quiet: the i10’s engine can be heard droning away at motorway speeds, while the 500 suffers from a surprising amount of road noise around town.