Fancy a city car that features sharp exterior styling, a well-made and spacious interior and a quiet and comfortable ride, as well as being good to drive and cheap to buy and run?

Welcome to the Hyundai i10 – a car that, in its second-generation form, has caught the eye of those eager to tick all of the above boxes to make all of its main rivals very nervous indeed. The first-generation model was a diminutive marvel, pointing the way to a much brighter future for Hyundai and all its subsequent cars. This newer version took all the pluses of the original and added some pleasing styling, as well as introducing a new platform to bolster the car’s dynamics and refinement.

Power comes from a choice of two petrol engines – a 65bhp 1.0-litre three-cylinder unit or an 86bhp 1.2-litre four-cylinder one. The 1.0-litre engine’s eager responses are fine for most town use, but the larger unit has the edge if your driving is likely to include A-roads and motorways. Indeed, it’s the i10’s refinement on all types of road that marks it out in the city car class – it really is as quiet as a much larger and plusher car. It even rides and handles well, too. You can even have a traditional automatic gearbox with the 1.2-litre engine that shifts between gears smoothly. There are only four gears to choose from, though, so it will be loud at motorway speeds.

As long as you avoid the S model, every version thereafter has driver's seat height adjustment. The steering wheel moves up and down, but not in and out. Mind you, that's also true of the Volkswagen Up/Seat Mii/Skoda Citigo. Premium models and above do get seatbelt height adjustment, though.

Tall people will be fine for head and leg room up front, while rear passengers can stretch out (relatively) in what is the roomiest city car out there. Parents of little ones will also appreciate the wide opening rear doors and high roofline that'll make getting a child in and out of a booster seat that much easier. The boot is a decent size, too, although it doesn't have any clever touches such as hooks or tie downs. If you need even more load carrying capacity, the seat backs can be made to lie down almost completely flat once you've lifted the base out of the way.

Trim levels range from entry-level S, which is a little too basic in our opinion, with steel 14in wheels and electric front windows. The popular SE model adds air con, cruise control, Bluetooth and a DAB radio, while Premium versions have 14in alloy wheels, privacy glass, climate control and a smartphone docking station. However, top-of-the-range Premium SE is our favourite i10 because it comes with big car luxuries such as a heated steering wheel and heated front seats, rear parking sensors and 15in alloys. From September 2016 onwards, this version got a 7.0in touchscreen with in-built sat nav and Apple CarPlay and Android Auto smartphone capabilities. There’s also a special SE Blue trim that is four-seat only (all other i10 models have five seats) and rides on smaller wheels in order to improve its claimed average fuel figure.

The i10 had a mild facelift in 2016, and alongside the 7.0in infotainment system mentioned earlier on top spec Premium SE cars, a fresh grille and LED daytime running lights were also added to improve the sizzle to its admirable steak. 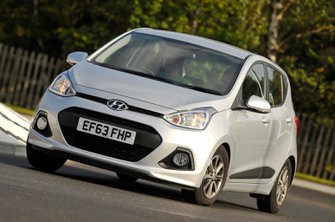